SWABI: Pakistan Tehreek-e-Insaf Chairman Imran Khan fired a broadside at Prime Minister Nawaz Sharif and his political allies at a huge public rally on Sunday. “[PPP Co-chairman Asif Ali] Zardari has returned to bail out Nawaz, but no one can save him [Nawaz] from us,” he added. “It is shameful that the rich is protecting the rich.”

He blamed Awami National Party chief Asfandyar Wali
for “wanting to play both sides: sitting in Nawaz Sharif’s lap and pretending to be working for the interests of K-P.”

When Imran asked if the country’s justice system would punish Sharif in the Panamagate scandal, the crowd responded in the negative. “My response is the same … Nawaz Sharif is culpable, but he will never face punishment … This is shameful,” he added.

Zardari returns to a different role

Imran said Sharif pretended that he was a pauper and his children were earning billions of rupees and supporting him. Sharif’s daughter Maryam Safdar recently tweeted that the ‘storm has passed’, he said. “It is strange! The case is still pending in the Supreme Court, how come the storm has passed!”

Blaming Premier Sharif and his brother Shahbaz Sharif for striking deals without taking other provinces in the loop, the PTI chairman said Sharif had backtracked on his promises.

“The China-Pakistan Economic Corridor (CPEC) is a glorious gift bestowed by God and a golden opportunity for ushering in an era of prosperity in the country,” he said.

“CPEC will change Pakistan’s destiny by connecting it with China,” he said, adding that the multibillion-dollar project could help develop backward districts like Karak, Dera Ismail Khan and Mianwali along the western route of the economic corridor.

“Our problem is not with China on CPEC … We are irked by the federal government because Sharif never honours his word,” Imran said. 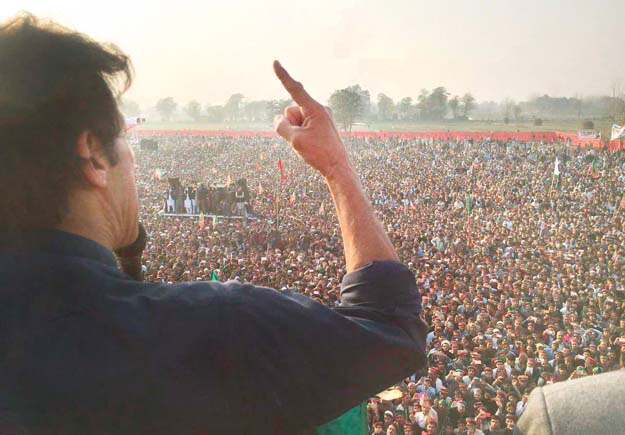 He urged K-P Chief Minister Pervaiz Khattak to approach leaders of other provinces and launch a movement for the province’s rights in CPEC.

Urging Premier Sharif to fulfill his promises, he said work on CPEC’s western route should start as soon as possible. “We support CPEC,

but the prime minister should immediately start work on the western route.”