PAKISTAN: World’s largest video-sharing website. Youtube, on Tuesday announced that it has launched localised versions of the site in Pakistan.

According to a media release issued by Youtube’s parent firm Google, visitors to YouTube from Pakistan will see their country-specific YouTube site by default. For instance, users from Pakistan will now see the YouTube Pakistan site in Urdu when they visit the YouTube homepage, with playlists of trending and recommended videos popular in Pakistan 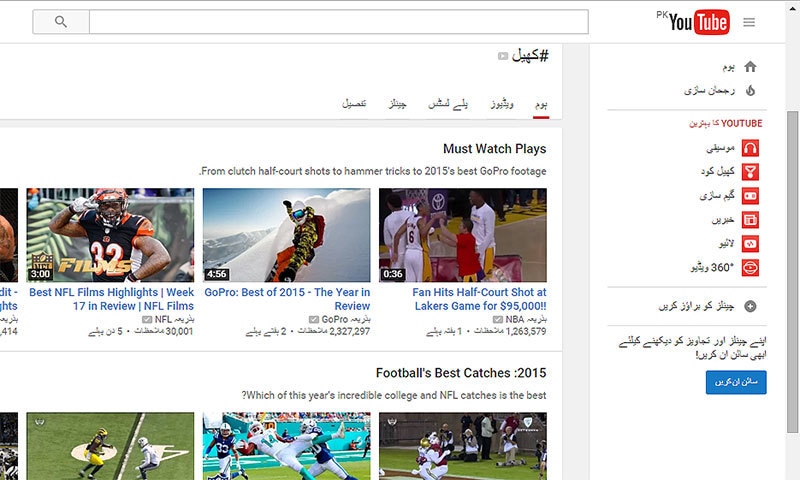 “Now, users visiting the YouTube homepage from those countries will be able to see videos and playlists that are popular in their countries in their local languages and domains,” read the media release.

The countries getting their local version along with Pakistan include Sri Lanka and Nepal.

“We aim to provide an even more tailored YouTube experience by launching versions that are optimised for Nepal, Pakistan, and Sri Lanka. We also hope that this will pave the way for the work of local creators, personalities, and musicians to shine on the world’s largest and most vibrant video community,” said the Google spokesperson.

The announcement gave fresh hopes to free speech campaigners and internet users who wanted the ban on the world’s popular online video community to be lifted.

The media release also said that Youtube will continue to track government requests to remove content and will include the same in its Transparency Report.

The video-sharing website has been blocked in Pakistan since September 2012 over its failure to take down the blasphemous “Innocence of Muslims” movie that sparked furious protests around the world.

The Supreme Court ruled at the time that the site should be banned until a way was found to block all blasphemous content.

In February last year, a government official told media that the site will remain blocked ‘indefinitely’ in Pakistan as experts have failed to find a way to filter content deemed offensive and blasphemous. -Dawn

2016-01-12
The Pashtun Times
Previous: Anushka to go de-glam in Wrestler’s Role in Sultan
Next: Putin Hints that Russia could Grant Asylum to Syrian President