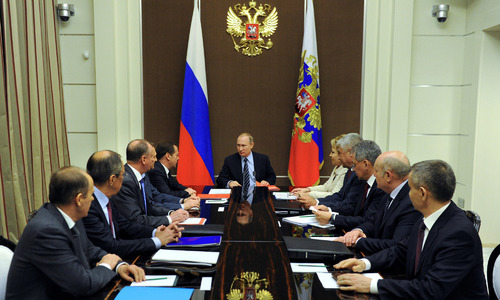 AFP: The West is threatening Russia’s sovereignty by financing non-governmental organisations (NGOs), encouraging young people to protest and using the media to shape opinion about the government, a Russian parliamentary report has said.

According to the report by the Federal Commission for the Protection of National Independence, Western interference in Russia’s internal affairs poses a greater threat to the country than the militant Islamic State (IS) group.

The commission listed nine threats to Russian sovereignty from abroad, including the “creation and support of NGOs which carry out political activities in the interests of foreign states” and “the incitement of young people to protest”.

“The use of media and social networks to discredit the country, institutions of power (and) political leaders,” was another threat, according to the report published on Tuesday.

The commission was established in June in response to accusations from Washington that Russia had interfered in the 2016 US presidential election.

The US authorities and their “NATO satellites” are specifically named in the document.

“Interference in Russian internal affairs does not just come in the form of direct propaganda, produced by public media such as Radio Svoboda,” the report said of the Russian language branch of Washington-backed Radio Free Europe.

“It can also be seen in the forms of educational programmes centred on Russian journalists,” it said.

On Monday, Russia threatened the US media operating in the country with new legal restrictions after Kremlin-controlled broadcaster RT complained of persecution by Washington. Russia has upped pressure on civil society groups since Putin’s re-election in 2012 when it adopted a law which allowed authorities to brand groups engaging in broadly-defined “political activity” and receiving funding from abroad as “foreign agents.”