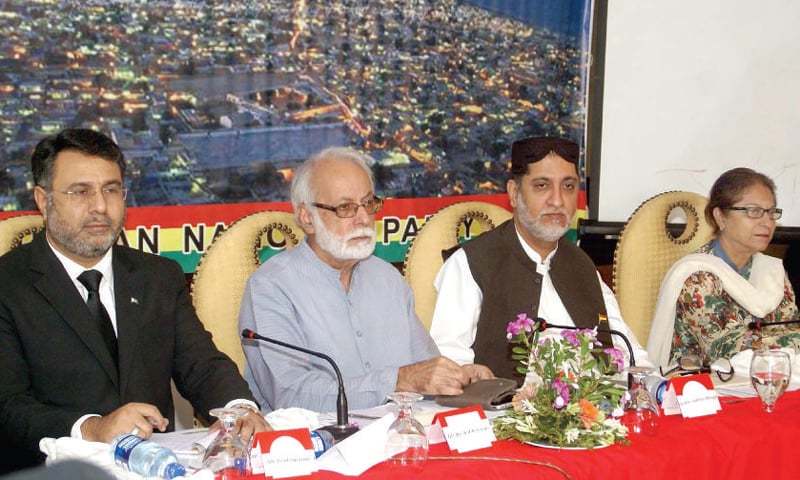 ISLAMABAD: Balochistan National Party (BNP) chief Akhtar Mengal has called the China-Pakistan Economic Corridor (CPEC) exploitative if it does not equally benefit all the provinces, particularly Balochistan, which is the epicentre of the project.

Mr Mengal was speaking at a seminar convened by the BNP in Islamabad, called ‘CPEC: Development or Exploitation?’.

Recalling past experiences and discriminatory policies enacted by the federal government, he said he feared that CPEC would not be a developmental project.

“In 1953 gas began to be produced in Sui, Dera Bugti, Balochistan, and it was sent to far off cities in 1963. But Dera Bugti has never controlled the facility. How can I believe that CPEC will be beneficial to [Balochistan]?”

He went on: “Through the Saindak Project, copper and gold are produced in Balochistan. However, China gets 60pc of the revenue, 38pc goes to the federal government, and only 2pc comes back to Balochistan… We want development. We support it. But not at the cost of exploitation.”

Human Rights Commission of Pakistan (HRCP) general secretary I.A. Rehman said CPEC is a golden opportunity to end Balochistan’s deprivation, by giving the province an equal share in the project and making it part of the decision making machinery.

He said ownership of Gwadar should be given to locals, and CPEC, which is an economic project, must not be turned into an ideological one. He said fishermen in Gwadar are being mistreated and must be given their due rights. He said locals should have control over the project.

“Looting Balochistan and spending it in Lahore is not development at all. But when we question the nature of development, we are labelled traitors,” says Asma Jahangir.

Asma Jahangir, the former president of the Supreme Court Bar, also spoke at the seminar.

“Looting Balochistan and spending it in Lahore is not development at all. But when we question the nature of development, we are labelled traitors,” she said.

She added: “Gwadar is a show case. But there are ‘no-go’ areas in Balochistan. Development should not take the lands of fishermen and construct buildings. I can’t call it a development while suppressing locals.”

South Asian Strategic Stability Institute (SASSI) head Maria Sultan said: “Gwadar is not only an economical point. It also has its very strategic importance. 70pc of world trade is will be through this port, but, despite this strategic location, Gwadar is not recognized as a global reference point. We need to be a part of the global trade. We must not make Gwadar only a connectivity point, but also a manufacturing base.”

Television anchor Hamid Mir said: “Balochistan must be given media coverage. There are many issues in Balochistan of which people are unaware.”

Former Daily Times editor Rashid Rehman said: “There is a national insurgency is ongoing in Balochistan. Through suppression, peace cannot be maintained. The issue of Balochistan is a political issue. It should be resolved politically. Only after that can true development be possible.”

Salim Saifi, a television anchor, said CPEC was a game changing economic project that has been turned into a political victory because it scored points for the PML-N government. He said it was made controversial by the prime minister, by Planning Minister Ahsan Iqbal and by Senator Mushahid Hussain because they concealed information. He said transparency in CPEC was imperative.

The seminar was wrapped up by Senator Jahanzaib Jamaldini, who said: “We are fed up with deprivation. We want development but not at the cost of turning our province into a minority. We demand legislation over CPEC. Power should be given to provinces. Technical institutions must be created. Fishermen should not be thrown out of Gwadar unless they are given another place and they are taken on board.” -DN, Agencies

2016-07-13
The Pashtun Times
Previous: Radio Pakistan misuses US officials’ speech on Durand Line
Next: Terrorism is a Mindset