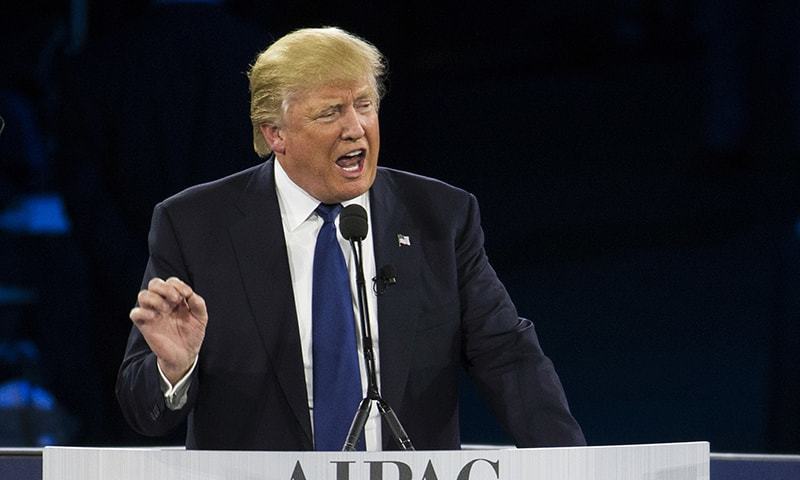 Trump and Cruz call for increased surveillance of Muslims after Brussels attacks. ─AP/File

WASHINGTON: US Republican presidential candidate Donald Trump said Muslims were failing to report suspicious activity and they must do more to help prevent attacks such as those that killed at least 30 people in Belgium.

Trump, who has called for a ban on Muslims entering the United States, said it was “a disgrace” that one of the suspects behind last November’s attacks in Paris had been found after a long manhunt by police in an area of Brussels where he lived.

“He was in his neighbourhood where he grew up and nobody even turned him in and supposedly this is retribution for that. It’s a disgrace,” he said.

Trump said there were signs that an attack by suspected extremists in California in December, which killed 14 people, could have been stopped.

“A lot of people in the community knew they were going to do it because in their apartment they had bombs all over the floor … and they didn’t report them,” he said.

“I don’t know what it is. It’s like they’re protecting each other but they’re really doing very bad damage. They have to open up to society, they have to report the bad ones.”

Trump is the front-runner in the race to be the Republican candidate in November’s presidential election. He has made a series of hugely controversial statements during his campaign that have boosted his popularity with supporters who see him as someone who speaks uncomfortable truths, but have outraged millions both in the United States and around the world.

Trump’s closest rival, Senator Ted Cruz Tuesday said that surveillance in Muslim neighbourhoods in the US must be intensified following the deadly bombings at Brussels.

Echoing Trump’s earlier statements, Cruz said the US should stop the flow of refugees from countries where the militant Islamic State (IS) militant group has a significant presence.

Speaking Tuesday afternoon in New York, Cruz praised the city’s police department’s former program of conducting surveillance in Muslim neighborhoods, called for its reinstatement and said it could be a model for police departments nationwide.