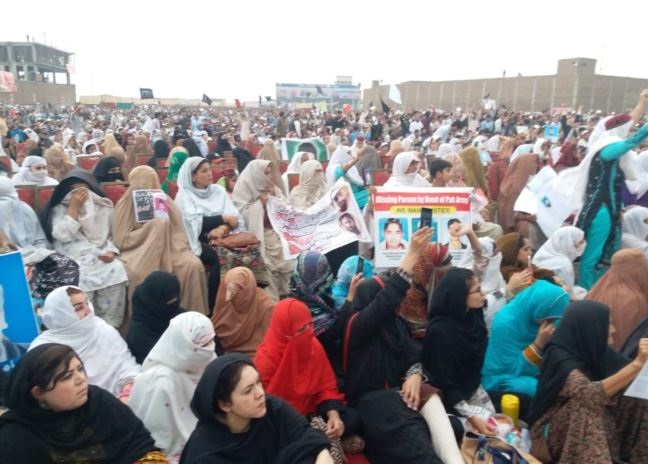 The world has been changing fast, so does the Pashtun society. The transition from mundane orthodox tribal society to vibrant urbanised progressive one dismantling old tribal social norms and relationship has changed leadership role in Pashtun land. Young people are fast becoming radicalised and coming forward to take the affairs in their own hands.

Emergence of Pashtun Tahaffuz Movement (PTM) is the evidence that the youth bulge have taken the charge, offering counter-narrative to the out-dated state narrative. Maliks (tribal chieftains) in Fata have been replaced by young educated men and women demanding an end to injustices being meted out to them. A positive hallmark of PTM’s struggle is that young educated women in large are at the forefront.

The movement which has been termed as Pashtuns renaissance is led by young Pashtuns intelligentsia comprising doctors, lawyers, businessmen, students, political, social, human rights workers, poets, teachers who grew up in the post 9/11 world marred with violence which took thousands of lives, destroyed hundreds of schools, other public infrastructure, private properties in Fata and Khyber Pakhtunkhwa.

These young men and women struggling for a better future are tired of violence, murky wars and have taken to streets asking the state to give up on the obsolete policies, stop using their motherland as a launching pad for its wars and make new social contract with them.

On April 8, PTM held an impressive public rally and managed to muster support from all spheres of life. Thousands of people participated in the protest for their rights using social media to let the world know about their cause.

The state’s response so far has been the same which it has always applied to counter any kind of dissent. The recent small-scale protest against the movement, a very old tactic also failed to deliver any result.

Power of digital technologies has helped citizens across the world to document crimes of their states and mobilise people against it.  Social media played an instrumental part in mustering support for socio-political movements like Black Lives Matter, Occupy Movement and Arab Spring. Though the PTM started in 2013 with a different name, however, it was social media that brought it to spotlight after the murder of Naqeebullah in a fake encounter in January this year by former Malir SSP Rao Anwar.

In PTM’s case, complete media blackout or suppression of online dissent has not worked so far and its impacts have reached across the world through social media. Leadership of the movement seem to be not looking up to mainstream media anymore and only relying on social media has spread their message like a wildfire across continents.

Small scale protests in favour of Pashtun’s struggle for rights in London, Berlin, Sweden, Australia and United States all were broadcast live through Facebook. Media blackout or countering dissent in technologically connected world is not easy and would not make the problem go away. How the state responds to the demands of its citizens will definitely have far-reaching consequences.

Intimidation, harassment and arrest of people associated with PTM have also not worked so far and won’t because the movement was born out of decades of injustice that created a sense of alienation among young Pashtuns. The only way forward to counter it is to listen to them and resolve the basic issues like clearing of landmines, removal of security check posts, producing missing persons in courts, ending curfews and announcement of Khyber Pakhtunkhwa-Fata merger along with a special development package.

If the state authorities continue to use coercive tactics, maligning leaders of the movement, it would simply give a message to Pashtuns, who form roughly 15 percent of the country’s 207 million people, that the state does not want them. Even if state succeeds in suppressing this movement for the time being, it is bound to resurface with a bitter response because crumbling socio-economic system of the country would continue to give birth to such movements.

Support from around the world is pouring in on social media for PTM’s struggle. More and more people are coming out to support the just cause of PTM. The once 22 persons protest has now become a movement and thousands of people joining it. It simply means that hundreds of thousands of people out there have not yet decided to join the cause but what they have been holding at heart would soon compel them to join the movement.

Hundreds of families of missing person joined the rally and it turned out to be a missing person’s protest. The movement has given courage to people who were subjected to violence by militants or state authorities and it seems those who have lost properties would also join the struggle.

Hamid Khan: The writer is a staff member at the Daily Morning Mail. He can be reached at lawangeen.hamid@gmail.com.