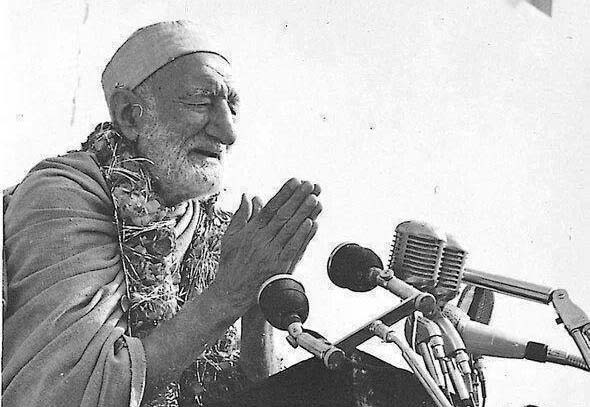 What could Bacha Khan teach Pakistan in light of the Pashtun Long March?

“I am going to give you such a weapon that the police and the army will not be able to stand against it. It is the weapon of the Prophet, but you are not aware of it. That weapon is forgiveness and righteousness. No power on earth can stand against it.” — Bacha Khan

These were powerful words spoken by Khan Abdul Ghaffar Khan, famously referred to as “Frontier Gandhi” and Bacha Khan (1890-1988). He was the first Muslim leader to put into practice the creed of nonviolence. He was born into a family of ethnic Pashtuns, who in the colonial era anthropological narratives were perceived to be men with swords and temperamental attitudes. In contrast, Bacha Khan was not only a devoted Muslim, but a man of peace and love. He believed that “a non-violent Pathan is more dangerous than a violent Pathan.” (Editors note: Pathan is a term synonymous with the more commonly used in modern parlance term Pashtuns).

Bacha Khan’s background as a Muslim and a Pashtun made his non-violent struggle appear unique. In a way, he was able to change the common discourse that Pasthans are short-tempered people. Bacha Khan famously proclaimed that “we would have fared ill if we had not learnt the lessons of non-violence. We are born fighters and we keep the tradition by fighting among ourselves… This non-violence has come to us as a positive deliverance.”

Yet following the collapse of the British Empire and creation of Pakistan, Bacha Khan found himself and his nonviolent philosophy increasingly pushed out. This stemmed from two factors: first Bacha Khan’s opposition to the creation of Pakistan, because of its communal foundation, and subsequently his opposition to the continued incorporation of Pashtun areas that had been divided by the British by drawing an artificial line, named as the Durand line. This led to him being imprisoned for much of his life. Second, growing radicalization of religion stemming from the alliance between Pakistan’s military and the mullahs, coupled with huge flow of armaments into the region by the West after the Soviet invasion of Afghanistan, did much to undermine Bacha Khan’s work.

However, Bacha Khan was a towering figure so much so that when he passed away in 1988 at the ripe age of 98, in what is now called Khyber Pakhtunkhwa, the mujahideen ceased fire and the border between Afghanistan and Pakistan was thrown open for people to pay their last respects before he was laid to rest in Jalalabad, Afghanistan. Subsequently, his passion and love for Afghanistan was given recognition via the nickname “Fakhr-e-Afghān, which means “pride of Afghans.” With death, his legacy was seen to have slowly petered out in the face of growing radicalization and violence exemplified particularly by the rise of the Taliban. The damage these changes inflicted on the Pashtun sociocultural fabric is incalculable.

The recent killing of Naqeebullah Mehsud, a 27-year-old shopkeeper, of Pashtun origin on January 13, 2018, in a staged army encounter in Pakistan is one manifestation of the misery heaped on the Pashtuns through systematic proliferation of violence and extremism by the state over the years. The army claimed that Naqeebullah was associated with the Taliban. The incident was criticized by the Pashtun community worldwide, though it is not the first time such an act of brutality took place against a specific community in Pakistan.

Nevertheless, after 71 long years of suffering Pashtuns voiced their demand for justice in form of the so-called Pashtun Long March, a nonviolent protest, in Islamabad. The crowd put forward demands including justice for the family, punishment of the guilty, stopping the extrajudicial killing of Pashtuns in Pakistan, removing land mines in FATA, and releasing abducted persons and the prisoners who are innocent.

The Pashtun Long March marks a watershed moment as it is the first time in Pakistan’s modern political history that we have witnessed a large-scale mobilization of Pashtuns drawing on the creed of nonviolence. This is significant for it comes at a time when the region, and Pashtuns in particular, are seen as predisposed to violence; Bacha Khan and his legacy have been seen in the contemporary context as a historical aberration. This holds out hope for the possibilities of nonviolent political mobilization in a region regarded as being synonymous with terrorism and extremism. Bacha Khan, whose legacy was long forgotten unlike that of Mahatma Gandhi, has served as a beacon of hope for justice in an arena where mobilization had come to be primarily centered around religious fronts propagating extremism.

The Pashtun Long March marks a crucial turning point for Pashtuns and Muslims offering an opportunity to build a counternarrative by standing against radicalization and extremism. For Bacha Khan, preserving nonviolent protest was much more important to Pashtuns than to the Indians because “the Pathans had been characterized by the British as wild, ungovernable and uncivilized and hence it was doubly important that their protest demonstrate political maturity and fitness for self-rule.” For that reason, Bacha Khan and his followers were able to challenge the British stereotype and hold the moral high ground in the history of the region.

Once again, the Pashtun Long March offers Pashtuns and Muslims the opportunity to seize the moment and put into political practice Bacha Khan’s creed of nonviolence. Although leaders like Bacha Khan are either forgotten or have been suppressed deliberately in contemporary narratives, the time is apt to rehabilitate this nonviolent history in the current political discourse in order to attain sustainable peace. This would be one of the greatest services that could be rendered to our future generations: helping them build a peaceful society.