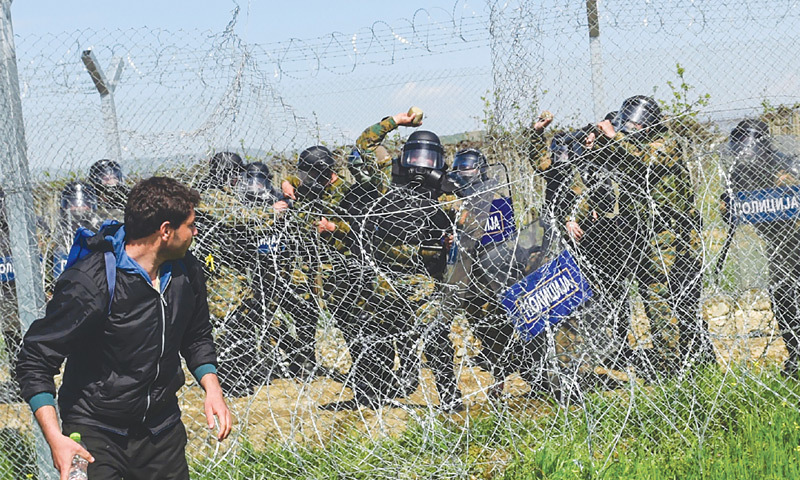 IDOMENI: Macedonian police throw stones at migrants and refugees during clashes near their makeshift camp here on Sunday.—AFP

IDOMENI (Greece): Scores of migrants and refugees were wounded on Sunday when Macedonian police fired tear gas and rubber bullets at crowds on the Greek side of the border, aid workers said, an act condemned by Greece as “dangerous and deplorable”.

More than 10,000 migrants and refugees have been stranded at the Greek border outpost of Idomeni since February after a cascade of border shutdowns across the Balkans closed off their route to central and western Europe.

An earlier attempt by a large group of migrants to cross the border fence had resulted in the confrontation, a Macedonian official said.

Greece said police on the Macedonian side of their joint frontier used tear gas, rubber bullets and stun grenades to push back the migrants.

Macedonian authorities would only confirm they used tear gas.

A deputy field coordinator with medical charity Medicins Sans Frontieres (MSF) said that of around 300 people treated, more than 30 had wounds caused by rubber bullets.

There were many women and children who had respiratory problems from tear gas exposure, he said.

More than a million people fleeing conflict poured into Europe mainly through Greece in the past year. The European Union is implementing an accord under which all new arrivals to Greece will be sent back to Turkey if they do not meet asylum criteria.

A Macedonian official who asked to remain anonymous said that a large group of migrants left Idomeni camp on Sunday morning and stormed towards the fence.

“They threw rocks at the Macedonian police. The police fired tear gas in response,” the official said. “The migrants were pushing against the fence but standing on the Greek side of the border. The fence is still there, they have not broken through.”

Witnesses said a small group of migrants attempted to talk to Macedonian border guards, asking for them to open the border. After given a negative response, they and other migrants started walking towards the fence.

Macedonian police fired tear gas, and some migrants hurled back some gas cannisters and rocks, they said.

In an unusually strong statement, George Kyritsis, a spokesman for migration coordinators in the Greek government, said the use of force was unacceptable.

“The indiscriminate use of chemicals, rubber bullets and stun grenades against vulnerable populations, and particularly without reasons for such force, is a dangerous and deplorable act,” Mr Kyritsis said.

More than 50,000 refugees and migrants are stranded in Greece as a result of the border shutdowns. By Sunday morning, there were more than 11,200 people at Idomeni.

A Macedonian police spokesman said the situation at the border was under control but still tense.