Swat varsity notice bars male, female students from mingling on and off campus

PESHAWAR: Imagine you go to a co-ed university. And one day, the administration says you are no longer allowed to communicate with your peers from the opposite sex on and off campus premises and will have to pay a fine in case you did. Wouldn’t that be a little confusing and strange?

A notification issued by the University of Swat’s chief proctor mandated just that.

The notice, dated April 14, 2016 and issued by chief proctor Hazrat Bilal said male and female students would be penalised if found mingling while on campus premises as well as outside the campus. 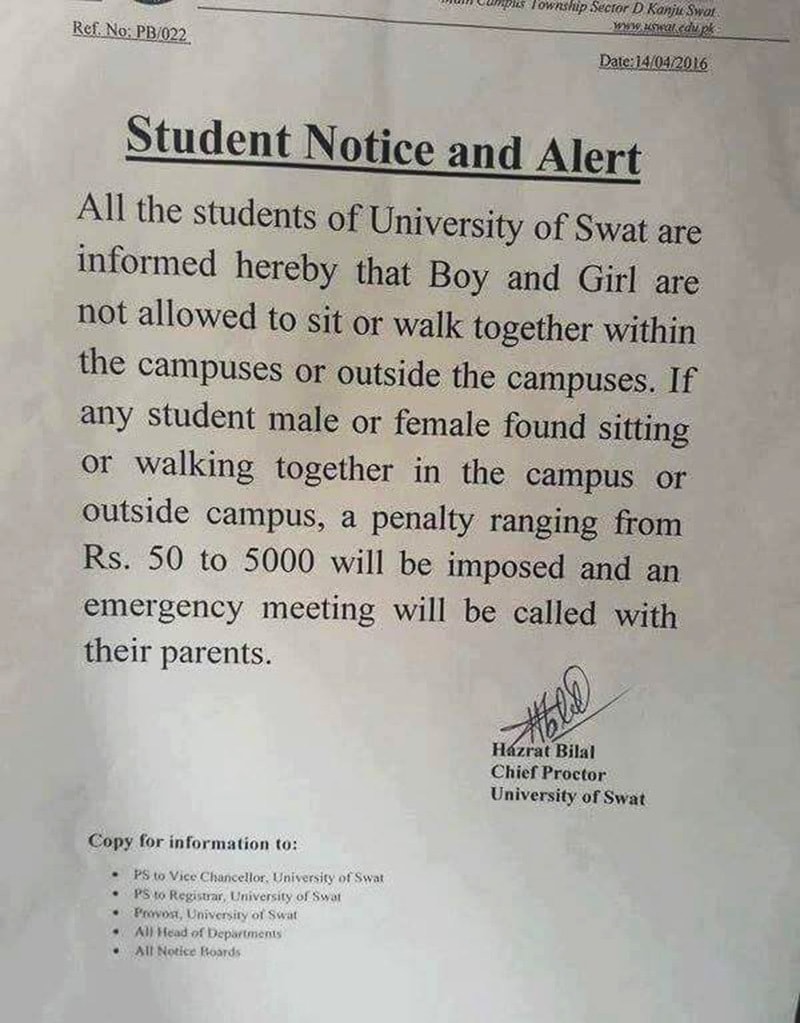 Notice issued from the office of University of Swat chief proctor.

“All the students of University of Swat are informed hereby that Boy and Girl [sic] are not allowed to sit or walk together within the campuses or outside the campuses,” said the notice, a copy of which is available with Dawn.com.

Any male and female students found “sitting or walking together”, it said, “a penalty ranging from Rs50 to Rs5,000 will be imposed [upon them]”.

As part of the disciplinary procedure, an “emergency meeting” will also be called with the students’ parents, the notice said.

In a later development, however, the University of Swat suspended its chief proctor Hazrat Bilal for issuing the notice without first bringing it to the knowledge of the vice-chancellor, said varsity spokesman Aftab.

The statement regarding gender discrimination now stands withdrawn, said the spokesman, adding that a committee has been constituted the VC to probe the issue.

A statement posted on the varsity’s official Facebook page, released from its PR office, said issuance of notices regarding varsity policy matters is the prime responsibility of the registrar office and “no other official is entitled to notify any policy related order”.

“Vice Chancellor cleared and expressed that there is no space for gender discrimination at varsity and condemned the fake notification from unidentified person,” said the statement.

After the area was purged of militants following a military operation, the government announced the establishment of the University of Swat on May 29, 2010, which formally came into existence on July 7, 2010.

Over 2,000 students are enrolled in 18 departments of the university. -ALI AKBAR