LOS ANGELES: At least two heavily armed attackers opened fire on a banquet at a social services centre for the disabled Wednesday, killing 14 people and seriously wounding more than a dozen others in a precision assault that looked “as if they were on a mission,” authorities said.

The armed couple suspected of the attack were identified by authorities on Wednesday as Syed Rizwan Farook, 28, and Tashfeen Malik, 27. Relatives have said the two were married.

They were later slain in a shootout with police. Police say they believe they were the only two shooters.

The police officer was injured in the gunfight with the two suspects, who were confronted in their getaway vehicle after fleeing the scene of the shooting.

Cervantes said the officer’s injuries were not considered to be life-threatening.

Police Chief Jarrod Burguan at a news briefing earlier said that as many as three suspects were believed to have made their getaway in a dark-coloured sport utility vehicle.

A man and woman with assault rifles, handguns and “assault-style clothing” were killed, the police chief said.

He said it was possible that a third shooter remained at large and that there were other people “involved in the planning” of the crime.

Burguan said 14 people were killed and 14 others wounded in the initial shooting spree, which unfolded at 11am on the campus of the Inland Regional Center, an agency that serves the developmentally disabled.

Cervantes later revised the toll of wounded to 17.

“We have no information at this point that this is terrorist-related, in the traditional sense that people may be thinking,” the police chief said. “Obviously, at minimum, we have a domestic-type terrorist-type situation that occurred here.”

The chief added he knew of no possible motive for the shooting spree.

A man identifying himself as the brother-in-law of one of the suspects said he has no idea what might have motivated the attack.

Farhan Khan, who said his sister was married to one of the people suspected of carrying out the attack, offered his condolences to the victims.

“Why would he do that? Why would he do something like this? I have absolutely no idea, I am in shock myself,” Khan said at a news conference in Anaheim, California, south of Los Angeles.

A person by Farook’s name was listed on county documents as an employee of the San Bernardino County Environmental Health Department. That department had gathered on Wednesday for a holiday party at the shooting site.

A man carrying the same name as Farook is also listed as residing at an apartment complex where the suspects of Wednesday’s shooting were tracked by police.

The Los Angeles Times, citing information from a senior federal official who was monitoring the case, reported that investigators believe one of the shooters left the party after getting into an argument and returned with one or two armed companions.

The police chief said he was aware that someone left the party following some kind of dispute but did not know whether that individual returned.

Authorities also detained an individual seen running away from the vehicle, but investigators were not immediately sure that person was involved in the case, Burguan said at the news conference.

Police searched door to door in the Redlands neighborhood a few kilometres from the site of the attack.

Bomb disposal technicians were examining a number of suspicious items left by the armed assailants at the Inland Regional Center, including one that was “believed to be a potentially explosive device”.

David Bowdich, an assistant regional Federal Bureau of Investigation director, said federal agents and local law enforcement were being cautious about entering a house in Redlands because of concerns about explosives that might have been left there.

As the suspects fled, authorities ordered a security “lockdown” of all local schools, as well as city and county buildings, and area hospitals were placed on alert, Burguan said. 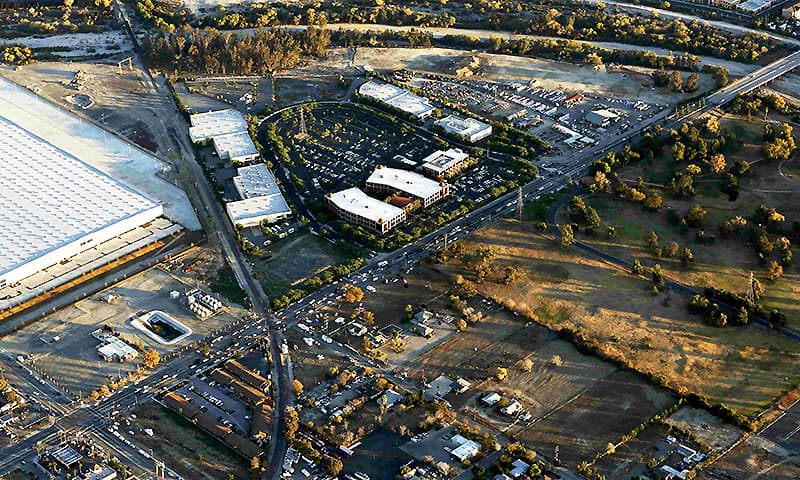 The Inland Regional Center complex is pictured in an aerial photo following the shooting. ─ Reuters

The shooting rampage in San Bernardino, about 100 km east of Los Angeles, marks the deadliest United States (US) gun violence since the massacre at Sandy Hook Elementary School in Newtown, Connecticut, in December 2012, in which 27 people, including the gunman, were killed.

The Inland Regional Center is one of 21 facilities set up by the state and run under contract by non-profit organisations to serve people with developmental disabilities, said Nancy Lungren, spokeswoman for the California Department of Developmental Services.

Lavinia Johnson, executive director of the facility, told CNN the suspects opened fire inside a conference building in the complex where a holiday party was being held for county health department personnel.

The conference building sits adjacent to the two larger three-story buildings that house most of the agency’s offices at the complex, Johnson said.

Asked whether that meant that the Inland Regional Center staff and clients were safe, she said she understood they were being evacuated. -Agencies

‘Stand behind my decision,’ says Biden on US withdrawal

Intl community to reiterate its commitment to Afghanistan at Kabul Process: US

Trump proposes $5b in aid to Afghan security forces