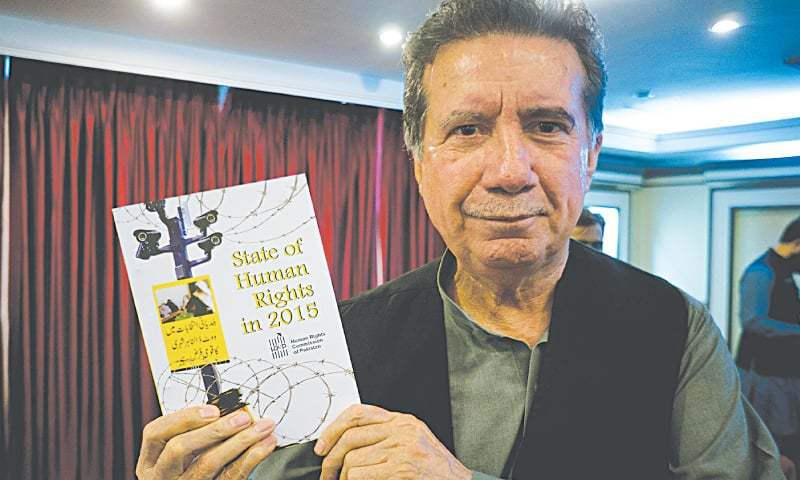 ISLAMABAD: Suicide attacks and sectarian killings dropped significantly in 2015 compared to the previous year but mob assaults on religious minorities showed up prominently, said the Human Rights Commission of Pakistan (HRCP) in its annual report on Friday.

Among the key attacks on minorities are suicide attacks on churches in Lahore and torching of a place of worship and a chipboard factory belonging to the Ahmadi community in Jhelum.

The report is significant because 2015 saw the National Action Plan (NAP) being put into operation for eradicating religious extremism and terrorism from the country. NAP was adopted by the government after a gruesome attack on APS Peshawar in 2014 claimed nearly 150 lives.

The HRCP noted that 2,108 men and seven women were killed in police encounters and 65 prisoners died in jails.

Attacks on buses and killing and abduction of passengers restricted the freedom of movement of certain ethnic and sectarian groups.

“There were 18 suicide attacks in Pakistan — 31 per cent less in comparison to last year’s. At the same time, 4,612 people died in violence, a 40pc decrease as compared to 7,622 violence-related deaths in 2014,” said Kamran Arif, co-chairperson of the HRCP.

He said that 41 terrorist attacks occurred in 2015 against 56 in 2014, targeting political leaders and workers in 25 districts, leaving 57 people dead and 75 others injured.

Fifty-eight incidents of sectarian violence were reported across the country. “Though the number has declined, the killing of professionals continued as five doctors and three lawyers were killed because of their faith,” the HRCP official said.

Four journalists lost their lives, but many more faced threats and assaults in 2015.

The HRCP documented 15 attacks on journalists and human rights defenders, including its monitor for South Waziristan, Muhammad Zaman Meshud, who was murdered.

Twenty-two individuals — 15 Muslims, four Christians and three Ahmadis — were booked on the charge of blasphemy.

Waqar Mustafa, editor of the report, said that military crackdown on militant hideouts in northwestern tribal areas brought down terrorist attacks almost by half. However, over two million people were internally displaced in the process.

While statistics suggested that things improved in Karachi after the paramilitary forces’ operation, it showed little attention was paid to complaints about rights violations allegedly by security forces.

The report has a chapter on ‘Administration of Justice’ which points out that under NAP, the 21st Amendment and the amendment to the Army Act, 1952, gave military courts jurisdiction to try all persons, including civilians and juveniles, in offences related to terrorism. Most of the 324 people executed had no links to terrorism and in all 419 persons were sentenced to death in 2015.

The HRCP said that 151 cases of disappearances were reported in Balochistan between January and November, whereas 1,390 cases of enforced disappearances remained pending with the Commission of Inquiry.

The dispensation of justice continued to remain protracted with 2,700 cases pending before the Supreme Court, 60,000 each in the Lahore and Sindh High Courts, 9,000 in the Balochistan High Court and 28,487 cases in the Peshawar High Court.

Under the head of ‘Freedom of Movement’, the report said, 65,000 names were removed from the Exit Control List (ECL) amid reforms.

“Yet, in March, some Baloch activists were restricted from travelling to the United States to attend a seminar. Subsequently, names of Farzana Majeed and Mama Qadeer were removed from the ECL on orders of the Sindh High Court,” Mr Mustafa said

It has been highlighted in the report that Pakistan’s passport ranks one of the worst in the world to travel with; it shares a place with Somalia as the third worst passport in terms of travel restrictions.

The HRCP has lauded the interior ministry for removing over 65,000 names from the ECL.

The report noted that for the first time in the country’s history, Balochistan and KP assemblies elected women speakers. However, it deplored that there had not been much improvement in access to education and health facilities, economic opportunities and political empowerment of women.

During 2015, a total of 939 women became victim of sexual violence and 279 of domestic violence; 143 women were attacked with acid or set on fire and 833 were kidnapped.

Despite the volume of cases, the rate of prosecution remained low, and 777 women committed or tried to commit suicide.

The HRCP database recorded 987 cases of honour crimes with 1,096 female victims and 88 male victims, of whom 170 were minors.

The HRCP criticised Pemra’s new code of conduct which allows auditing of live content of TV channels and restrictions on live broadcasts. It expressed fear that if passed by parliament in its current form the Prevention of Electronic Crimes Bill poses serious threat to freedom of expression in cyberspace. -DN