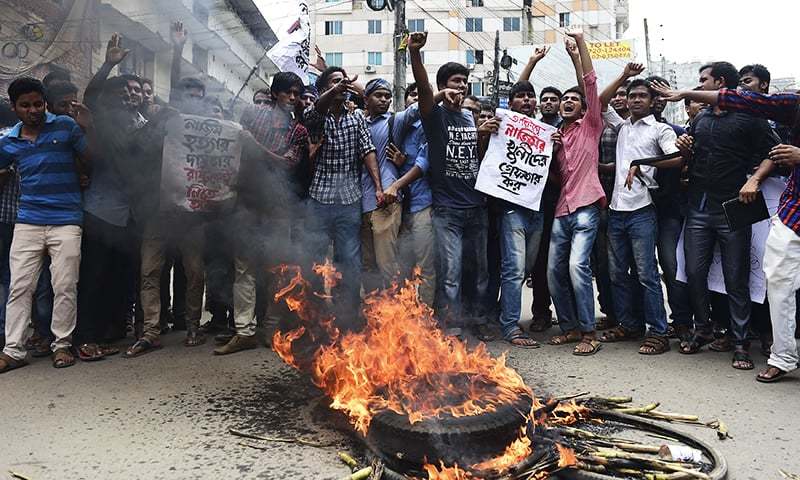 Bangladeshi students block the road and stage a protest following the murder of a law student, hacked to death by four assailants the night before, in Dhaka on April 7, 2016. —AFP

DHAKA: A Bangladeshi law student who posted against radical Islamism on his Facebook page has been murdered, police said Thursday, the latest in a series of killings of secular activists and bloggers in the country.

Nazimuddin Samad, a 26-year-old atheist who had taken part in protests against Islamist leaders, was attacked late on Wednesday near his university in Dhaka by unknown assailants carrying machetes.

“They hacked his head with a machete. As he fell down, one of them shot him in the head with a pistol from close range. He died on the spot,” deputy commissioner of Dhaka Metropolitan Police Syed Nurul Islam told AFP.

“It is a case of targeted killing. But no group has claimed responsibility,” Islam said, adding police were investigating whether Samad was murdered for his writing.

The killing — the sixth such murder of secular activists in 15 months — sparked protests in Dhaka. More than 1,000 students blocked a busy road to demand the attackers be brought to justice, an AFP photographer at the scene said.

Police said at least four assailants followed Samad on Wednesday night when he was returning home after an evening class.

The Dhaka Tribune said they shouted Allahu Akbar (God is Greatest) as they attacked Samad on a busy road near Dhaka’s Jagannath University, where he was a law student.

“He was a secular online activist and a loud voice against any social injustice. He was against Islamic fundamentalism,” said Sarker, head of the Bangladesh Bloggers Association.

At least four atheist bloggers and a secular publisher were hacked to death last year.

Police have arrested members of a banned group called the Ansarullah Bangla Team (ABT) over those murders, although no one has yet been prosecuted.

Secular groups have called nationwide protests and rallies to demand more protection for publishers, bloggers and writers, some of whom have fled the country or gone into hiding.

Several foreigners have also been murdered in recent months in Bangladesh, which has also suffered attacks on minority Sufi and Shia Muslims.

A long-running political crisis in the majority Sunni Muslim but officially secular country has radicalised opponents of the government and analysts say extremists pose a growing danger.

“The persistent failure of the Bangladeshi government and the international community to better protect threatened thinkers has created a climate of fear and direct threat to free thought in the country,” PEN America said in a statement condemning Samad’s murder.

Samad had posted several comments on Facebook criticising radical Islam and mocking hardline Islamists and their attitude to women’s rights.

In one, he described religion as “the most barbaric invention”, while another mocked a hardline Muslim cleric who was recently arrested for raping a young boy.

Samad had only recently arrived in Dhaka from the northeastern city of Sylhet to study law.

Deputy police commissioner Islam said the attackers had likely been monitoring the victim prior to his arrival in Dhaka.

Gulam Rabbi Chowdhury, a secular activist and childhood friend of Samad, told AFP he did not know whether the victim had ever received threats from Islamist groups over his Facebook posts.

“However, when I last met him in February, he told me that he deactivated his Facebook page for a few weeks and left Sylhet city to live in hiding in his village,” after concerns from his family, Chowdhury said. -AFP