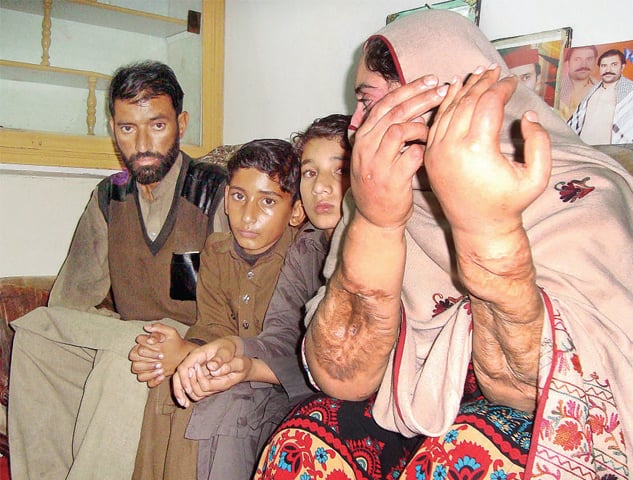 Militancy-hit Farman along with his family

MINGORA: Although normalcy has returned to the scenic valley of Swat, yet scores of people, affected by the militancy, are still facing hardships.

Hundreds of widows and orphans have to struggle to get onetime food while there are many more who suffer from the injuries they received during militancy in the region.

Like most of the residents of the picturesque valley, Farman and his wife Seema were living happily till 2008. Their life took a turn when Farman received hand injuries after a suicide bomber blew himself up during the funeral procession of DSP Javed Iqbal at Haji Baba in 2008, killing over 60 innocent people, leaving hundreds other injured.

Several ball bearings and shrapnel pierced through flesh of his hands. He underwent a surgery and doctors amputated both of hands. “Since his both hands were cut off, our miseries began. We not only lost our wealth but also our peace of mind and happiness,” Seema told this scribe.

Now she has to take care of her husband like a little child. They have two children and according to Seema other children taunt them about their father having no hands.

To add to their miseries, Seema contracted pyoderma skin disease that made her hands’ bones fragile. She underwent several surgeries but the problem is on constant increase.

“My biggest concern is for my husband and two sons as up till now I could do all for them but who will do it if I lose my both hands. This idea pricks my heart and I cannot sleep in the nights,” she said.

Presently, the family is facing financial problems. Their friends and parents have also exhausted their resources on the treatment of the couple.

“We live sometimes with in-laws and sometimes at my parents’ house. In both places we don’t have our own room to stay in. At least we should have our one room in which we can spend life,” said Seema with tears rolling down her cheeks.

She wants the government to educate her children as she loves education. She said that she witnessed some very happy moments in her life but those were so short that she forgot to their details. “It was like a short dream which I have now forgotten. Now I am in a long nightmare and don’t know when it will end,” she added.

Seema appealed to both the provincial and federal governments and humanitarian organisations to help her treat her disease so that she could at least take care of her children and disabled husband.

“I sent a letter to PTI chief Imran Khan but he did not reply. Though life has lost its charm and value for me, yet I have to live for my children and husband. If my both sons grow up educated they will become hands of their father,” she said in a choked voice. -FAZAL KHALIQ, DN