Russia ready to cooperate with US on Afghanistan, says Putin

We can see the radical militant groups occupy larger and larger swathes of land at the northern border of Afghanistan: Putin 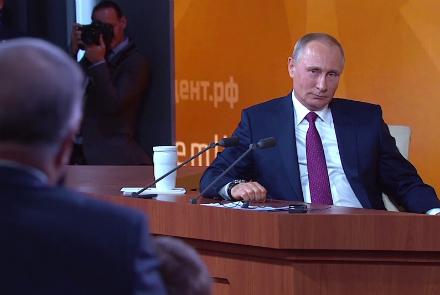 Russian President Vladimir Putin in his annual speech on Thursday said his country is ready to cooperate and work with the United States in counter-narcotics and counterterrorism efforts in Afghanistan.

Putin said threats are increasing in Afghanistan, especially in the northern parts and that it is worrying.

He said if Russia and the US jointly work in Afghanistan, the result of the efforts will be much greater in fighting the international terrorism.

“This is one of the focus areas where we could really join our efforts with the United States. And if we achieved this joint work, these efforts could become more efficient. We can see a growing threat of international terrorism in Afghanistan. We can see the radical militant groups occupy larger and larger swathes of land at the northern border of Afghanistan,” Putin said.

Putin said Russia is also ready to support Afghan security forces in maintaining security, especially in the north of Afghanistan.

The Russian president said security risks are increasing in Afghanistan and the Afghan government needs the support of the international community.

“We can see that the central government in Kabul needs support of the international community. And we are ready to provide such support, just like in previous years, including support in preparation of domestic personnel for the police and the military,” Putin added.

Meanwhile, Afghan government urged countries in the region to act against the terrorism ‘responsibly’.

“We expect all countries to act responsibly against terrorism, same as the Afghan government and Afghan forces. Any relations should be government-centric,” said Shahhussain Murtazavi, President Ashraf Ghani’s spokesman.

Analysts said considering Russia’s influence in the region the possible cooperation between Moscow and US will be effective for Afghanistan.

“It will be effective for Afghanistan if Russia wants to cooperate with US in the fight against terrorism and create a coordination in the region,” said Nader Shah Bahar, an MP.

Albeit Putin says that Russia and US’s joint anti-terror efforts in the country will be more efficient, but it is not known whether the two countries will agree to work together on Afghanistan.