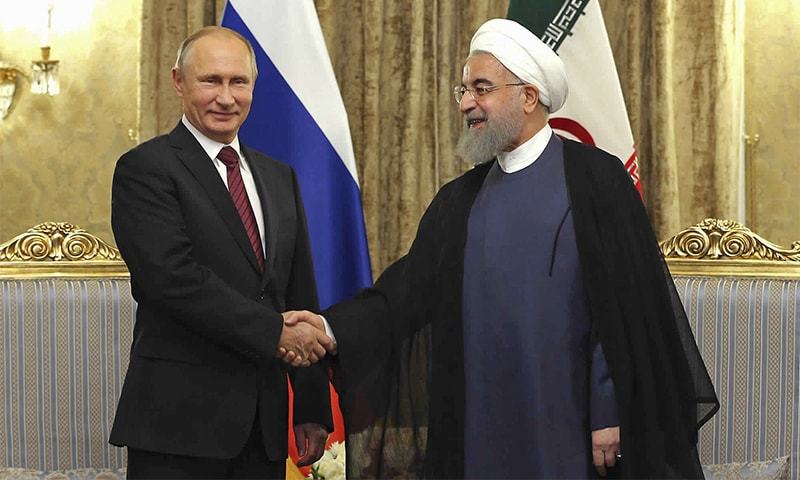 Russian President Vladimir Putin met Iran’s leadership on Wednesday in Tehran as the two Damascus allies push a Syria peace plan and the Kremlin offers its backing for a landmark nuclear deal facing US opposition.

Putin ─ on his first visit to Tehran since 2015 ─ held talks with President Hassan Rouhani before he was due to meet supreme leader Ayatollah Ali Khamenei.

The Kremlin strongman will also take part in a three-way summit with Rouhani and the leader of ex-Soviet Azerbaijan Ilham Aliyev aimed at bolstering economic ties between their energy-rich nations.

Moscow said Syria will be a focus of Putin’s visit, which comes after Russia, Iran and Turkey pledged after negotiations in Kazakhstan on Tuesday to bring the Syrian regime and its opponents together for a “congress” to push peace efforts.

Russia and Iran, key military supporters of President Bashar al-Assad, and Turkey, which backs Syrian rebels, have organised a series of peace talks in the Kazakh capital Astana this year, agreeing on the establishment of “de-escalation” zones in various parts of the war-torn country.

Wednesday’s talks will also focus on the 2015 Iran nuclear deal, which saw sanctions lifted in exchange for limits on Tehran’s atomic programme and which is under pressure from US President Donald Trump.

Tehran signed the deal with six countries including Russia and the United States, but Trump last month refused to certify the agreement, drawing criticism from Moscow which slammed the US president’s “aggressive and threatening rhetoric” against Iran.

The military might of Moscow and Tehran in Syria has helped prop up Assad’s forces and turn the protracted conflict in his favour with a string of key battlefield victories.

Since the start of the year Russia has looked to cement the gains from its game-changing intervention by spearheading the peace push at talks in Kazakhstan, positioning itself as a broker between key players Iran and Turkey and largely bypassing the West.

Up until now the focus has been on quelling the violence on the ground and the three powers have established four “de-escalation zones” around rebel-held territory in the country.

The zones were initially credited for bringing about a significant reduction in bloodshed, but international aid groups say they are currently failing to curb the fighting.

Now Moscow seems keen on expanding its peace drive in search of a political settlement and on Thursday got Iran and Turkey to agree on an initiative for a “Congress of Syrian National Dialogue” that aims to bring together some 33 delegations in the Russian city of Sochi on November 18.

Putin and the Iranian leadership are also set to find common cause in their fierce opposition to Trump’s stance on the 2015 deal to curb Iran’s nuclear ambitions.

The US leader’s decision not to certify the deal has been opposed by the other international powers that signed off on it as they insist the agreement is working.

The lifting of the sanctions under the nuclear deal has opened Iran up for business and Russian firms are competing to bolster their involvement in the country.

Moscow and Tehran have had close military and economic relations for some time, and in the nuclear field Russia has already built one reactor at Iran’s Bushehr plant and just started work on two new ones.

Putin’s arrival in Iran comes a day after the US Treasury added 40 Iranian individuals and entities already targeted by sanctions to a counter-terrorism blacklist.

Despite initial opposition, Trump in August signed off on a sanctions bill targeting Russia, Iran and North Korea after it was passed overwhelmingly by Congress. -AFP