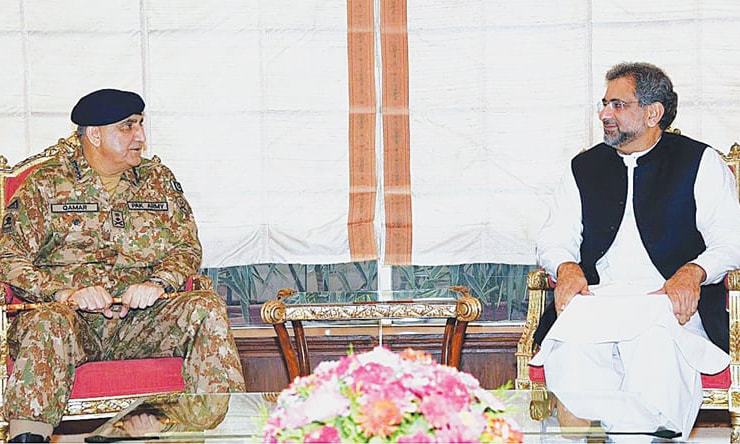 ISLAMABAD: A meeting of high-level military and political leadership is currently underway at the PM House, under the chairmanship of Prime Minister Shahid Khaqan Abbasi, to devise a “detailed reply” to President Donald Trump’s accusation of Pakistan being a “safe haven” for terrorists.

The national security meeting is being held to come up with a combined response to President Trump’s new stance regarding Afghanistan and South Asia, in which he has singled out Pakistan for its alleged involvement in terrorism.

“We have been paying Pakistan billions and billions of dollars at the same time they are housing the very terrorists that we are fighting,” Trump had said in his speech on Monday night.

He demanded that Pakistan should “stop offering safe haven to agents of chaos” as he presented his policy for the 16-year-long war in Afghanistan in his first formal address as the commander-in-chief.

While inviting India to provide more economic assistance and development to Afghanistan, Trump discarded his previous criticism of America’s longest war as “a waste of time and money”.

PM Abbasi has yet to respond to the shift in US stance.

On Wednesday, US Ambassador David Hale called on Gen Bajwa to brief him on the new South Asia policy of the US.

Responding to the invective, the army chief had said: “We are not looking for any material or financial assistance from the US, but trust, understanding and [an] acknowledgement of our contributions.”

Earlier on Tuesday, the day after Trump’s speech, Ambassador David Hale also met Khawaja Asif and told him that US Secretary of State Rex Tillerson will discuss the bilateral relationship between the two countries and the US’s South Asia policy in greater detail.

During the meeting, Asif had reiterated Pakistan’s desire for peace in Afghanistan and told the ambassador that he had accepted the invitation extended to him by Tillerson last week and looked forward to interactions with Washington.

The same day, US Secretary of State Rex Tillerson had underlined the measures the Trump administration could take to prevent Pakistan from allegedly supporting the Afghan Taliban.

Tillerson had also reminded India of the need to “take some steps of rapprochement” for improving ties with Pakistan.

After Trump’s allegations against Pakistan for allegedly harbouring terrorists, China and Saudi Arabia have come to the country’s defence in separate statements and asked that the world acknowledge Pakistan’s contribution in the fight against terrorism.

Chinese Foreign Ministry spokeswoman Hua Chunying had asserted that Pakistan was on the front line in the struggle against terrorism and had made “great sacrifices” and “important contributions” in the fight.

Chunying called on the international community to recognise Pakistan’s role in the fight against terrorism. -DN