Pashtuns’ Uprising: The Art of Resistances

Pashtuns’ Uprising: The Art of Resistances 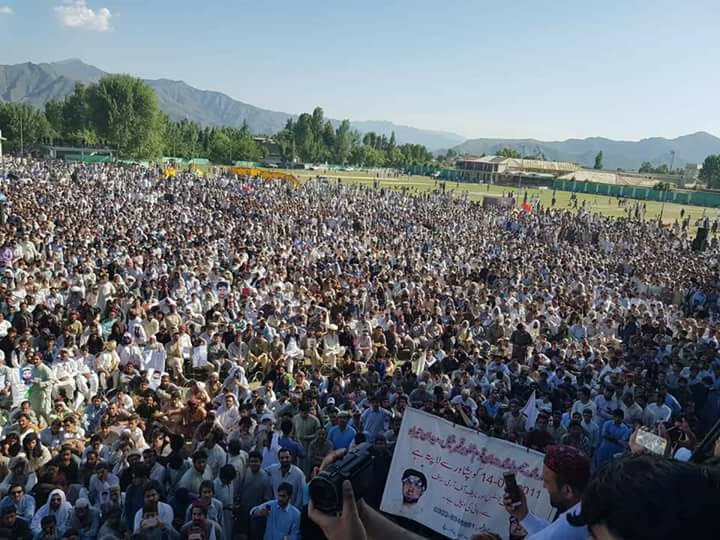 To put it simply and bluntly, James C. Scott, (an anthropologist and political critic on nations-state) discusses four forms of resistance, that’s how an individual constructs and re-constructs itself in dealing with dominant and subordinate “power-relation” in his excellent book “Domination and the Art of Resistance”. His four forms of resistance can be seen in every society. Firstly, the power-relation between subordinate and dominant or slave and master is seen publicly, and bases exclusively on official story or dominant narratives which he terms it “public transcript”. In public transcript the subordinate or slave is always acting and behaving in the will and wishes of his or her master or dominant. Secondly, the opposite of public transcript, he mentioned another transcript and that is “hidden transcript” by it, he means subordinates or slaves can safely talk to each other and try to develop “counter-narratives” against the dominant group outside the gaze of power. To simplify it more, hidden transcript characterizes discourse that takes place “off stage” behind direct observation by power-holders. It consists of those offstage speeches, gestures, and practices that confirms, contradicts or inflect what appears in public transcript. Thirdly, he discusses “infra-politics “or low forms of resistance among the subaltern classes. Infra-political forms of resistance, thus do matter politically, because these “offstage” discursive practices are “continually pressing against the limit of what is permitted on stage. Finally, when the suppression and oppression crosses its limit and the dominant group pushes subordinates or subaltern through the wall, the (subordinates) become “breaking their silence” and act overtly or “onstage” because of the low forms of resistance grounded in hidden transcript.

After discussing James C. Scott conception of domination and art of resistance I switched it now to the current uprising or some called it “Pashtuns ‘spring,” “Pashtuns’ renaissances” started earlier in this year name it “PTM or Pashtuns Protection Movement” under the very young, enthusiastic and charismatic leadership of Manzoor Ahmad Pashteen  who hailed from the so-called tribal area Waziristan. The history of the area goes much farther than 9/11 that why it was created as a buffer zone or safer place for global terrorists by the deep-state, but things appeared to more worsen after 9/11 and the region become a hell for the local people both by the hands of Taliban and Pakistani military.  After one in another dozen of military operations have been carried out by the military, but considerably failed to restore the taken away peace and life in Waziristan. The local have been forced to leave their homes and become IDPs or later renamed those TDPs left everything behind, but in return of the local people back to their homes as the military declared the region as terrorist-free and claimed success in operation, the local people have faced considerable problems including, humiliation in check posts, Watan Card, landmines and many more.  In such miserable situation there were (are) few young, educated Pashtuns who brought up and see the whole drama all along their life, as they lost every hope of restoration for peace, finally started a movement and gathered people against the inhumane atrocities and brutalities of both sides. Those hidden transcripts become public when in Karachi a young icon Pashtun man was brutally killed by the notorious police officer (Rao Anwar) in extra-judicial killing. Things were changing rapidly as the movement gained momentum and marched towards every corner of Pashtuns ‘regions and across the country, gathered a mammoth crowd everywhere who publicly broken their silence and challenged the Pakistani  military top-brass and establishment. Their way of speaking truth to the power is direct, and sharp, but to the point.

The point is that, neither everyday forms of resistance nor the occasional uprising can be understood without reference to the sequestered social sites at which such resistance can be nurtured and given meaning.  Why Manzoor Ahmad Pashteen and PTM is becoming so popular among the suppressed, oppressed, de-humanized, demoralized and demonized subaltern classes of Pakistan in general and Pashtuns in particular is because he made public those “offstage” or “hidden transcripts” and give voice to those voiceless who knows many things but cannot dare to speak it in the face of dominant or power-holders. His style of narrations is soft, beautiful and artful. The most vital of it, he has the first-hand information and observation of the downtrodden Pashtuns’ community.

To sum up, if the state wants to learn from its history, it must use its brain rather than power and think rationally and logically that, as a state what it got while pushing and exposing its citizens into war since 9/11. It must reconsider all its anti-Pashtuns polices and should act democratically and must ensure the supremacy of constitution everywhere and for everyone. Act in such inclusive way rather than exclusive manner will empower its democratic institutions and will act as a truly democratic federation and after all there is a way to be good again.