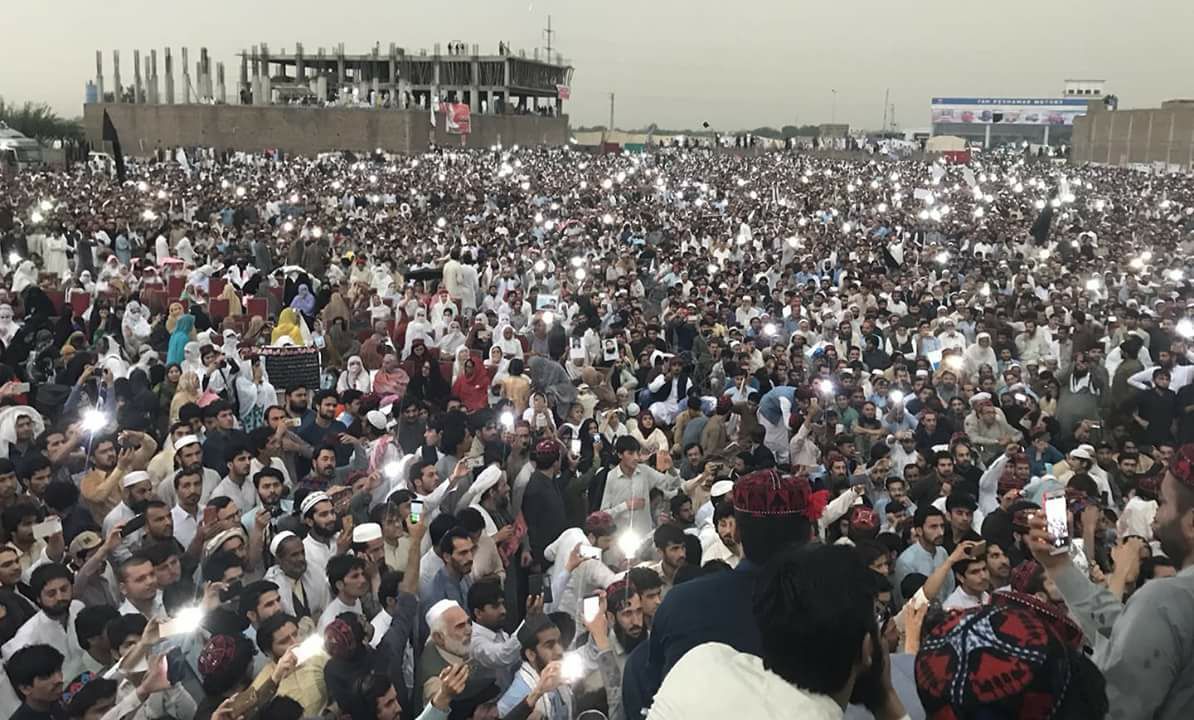 Two implications can be constructed from the military chief’s depiction of PTM in his speech. Firstly, mainstream media and the political leadership, who remained silent for days, were permitted to speak about PTM but in line with his portrayal. Secondly, his speech revealed the dual face of Pakistan Army who on the one hand viewed PTM as a threat to national security and on the other hand fulfilled some of their demands including the release of more than 200 men, clearing up of South Waziristan from land mines, issuing them NADRA cards and relaxation on military check posts. Fulfillment of these demands was also mentioned by the DG ISPR in his press conference few days ago, while calling Manzoor Pashteen as a “wonderful guy”.

Despite of mainstream media’s silence, PTM’s tremendous gathering in Peshawar on April 8 compelled many political and social activists and even scholars to express their empathy for them. Social media has been the only source of their awareness and activism. The mainstream media attracted too much abhorrence from the common flock by showing disinterest in such mass mobilization. Their trust in the mainstream media is fast eroding and it has been the center for criticism on social media. This behavior of Pakistani media shows its biasedness and questions its freedom.

Though, declaration of PTM as a threat to national security by the chief would change the common perception, however, the inherent hatred constantly radiating in the hearts of these victims due to injustice committed to their families would never recede. In fact the momentum in PTM is inherent in the sorrows of thousands of families who lost their relatives while others still optimistic for their return. It is a threat to national security because the state does not have any justification for the whereabouts of the missing persons. Realistically, labelling an oppressed group negatively is no justice. Every member of PTM is a national of Pakistan and they deserve equal and fair treatment. When we define justice as fair treatment, it exposes the oppressive and discriminatory behavior of many state institutions. Such demonstrations were already witnessed by people before particularly that of PTI (Pakistan Tehreek-e-Insaf) and PAT (Pakistan Awami Tehreek) and even that of Khadim Hussain Rizvi but none of them was declared as a threat to national security. These demonstrations were given constant coverage on mainstream media, despite of damaging state installations, obstructing passages and inflicting huge cost to national exchequer. This difference highlights the question of their patronage.

Pakistan army is one of the prime institutions of the state and it should be given proper honour and respect beyond all socio-economic, political and religious affiliations but its past involvement in the proxy war, patronizing riotous groups in Afghanistan, interfering in political setup and building pressure groups against the democratic governments are no more secret. Every strong army of a state is augmented by an invisible support and love of its citizens but unfortunately it lacks in Pakistan. Singing national anthems and celebrating the independence and other days of national significance with great pomp and show are the symbols of nationalism but reality is far different than that and PTM is one strong evidence. Nationalism or patriotism is not something that could be imbued in the citizens by force rather it develops through justice and equality. Anti-state slogans usually emanate from the oppressed class of the society and never by the bourgeoisie. The more justice is compromised on by the state or its prime institutions the more it will get the oppressed organized. In Pakistan, it is not unusual to declare an individual or group as traitors who resist such oppressions either in written, verbally or physically and PTM is not an exception. Bacha Khan, Habib Jalib, Faiz Ahmad Faiz, Mahmood Khan Achakzai, Akbar Bugti, Asma Jehangir and even Fathima Jinnah and many others received this title in their times. Were they really traitors or they were negatively labelled as traitors? Literally, whenever the military establishment felt threatened it used the label of deviance.

Some people perceive that PTM would turn into a political party with the passage of time and Manzoor would lead it as an unregistered political party, however, this perception raises from the political forums. PTI openly refused to support PTM and even disallowed its members to participate in the movement. ANP though refuted to support PTM, however, majority of the ANP old workers who staunchly associate themselves with the philosophy of non-violence, enthusiastically participated in the movement and even pledged for future support. Other political parties and their leaders have been silent and they do not want to lose their vote bank by either rejecting or supporting PTM. In addition, none of the government bodies have intended to speak about or negotiate with Manzoor neither the civil administration nor the police department. Though, the chief justice has been very active in taking suo moto actions but only on the assigned tasks. He remains reluctant in talking about PTM.

PTM and its sharp momentum raises many questions on the state policies. Firstly, their bold stance on raising the issue of missing persons and so bluntly raising slogans against Pakistan army and its prime agency shows the degree of violence committed to them. Secondly, they have brought awareness in people on the adversarial policies of the state and Pakistan army. Thirdly, they have exposed the law and order situation in FATA and the so-called progress state agencies have achieved in the past more than one decade. Fourthly, they have removed fear from the hearts of the common people in expressing themselves or fighting for their rights.

Dr. Sheraz Ali: The writer is a lecturer in Development Studies, based in Khyber Pakhtunkhwa