Pashtun Spring in Islamabad demands an end to Pashtuns’ genocide 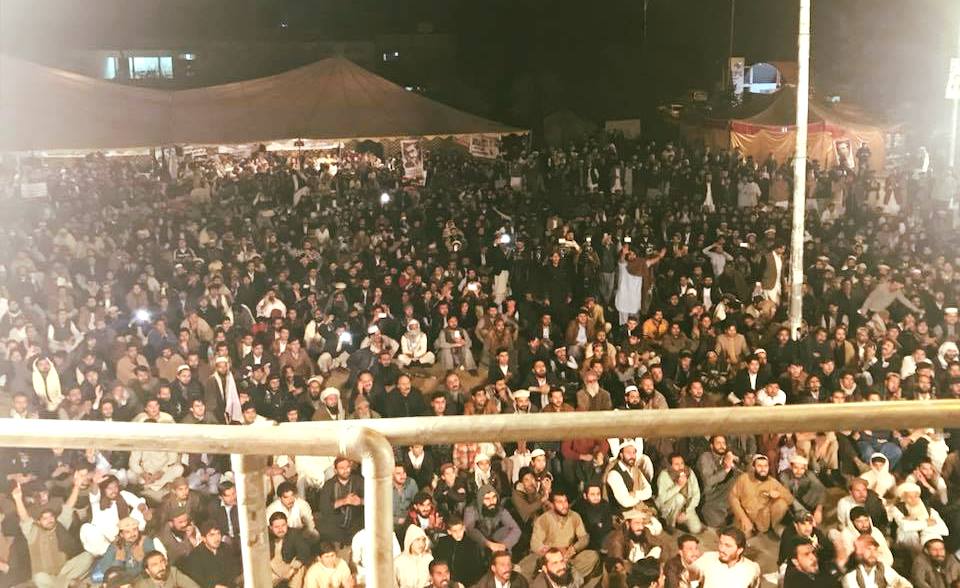 The Pashtun Long March has reached Islamabad and staged a sit-in in front of press club, wanting Justice for Naqeeb Mahsood, full stop to Pashtun genocide in Pakistan, human rights violations in FATA and Pakistan imposed terrorism and militarism, but it was totally blackout by Pakistani media on the pressure of military establishment—an act of discrimination, exposing the freedom of media outlet in Pakistan.

The sit-in is being held following the extrajudicial killing of Naqeebullah Mahsood in a fake police encounter by a notorious police official, Rao Anwar  on 13 January in Karachi—capital of Sindh province and he was charged with militancy and links with Jashkar-e-Jhangvi and Islamic State of Syria and Iraq. The false claim was challenged by the family and relatives of Naqeeb Mahsood and subsequently an inquiry commission was established by the government of Sindh province to investigate the police encounter. The investigation team has announced Naqeeb innocent and killed in fake police encounter. Pakistan’s Supreme Court has taken sue-Moto action of the incident, but the notorious police officer, committing extra judicial crimes have been provided a safe haven by the country’s security agencies. He has been openly speaking to media, but not presents in court—another evident of states within the state.

Youth from Waziristan started a long march from D.I. Khan—southern districts of Khyber Pakhtunkhwa on January 26 against the ongoing slow motion Pashtun genocide in Pakistan, human rights violations in FATA and State imposed terrorism and militarism. Protesters claimed and loudly chanting slogans that Pakistan’s security agencies have been harboring, sheltering and conducting terrorism in FATA and Afghanistan, aimed at de-Pashtunization and undermining US led war on terror. The long march by the youth of Waziristan was warmly welcomed in Lakki Marwat, Bannu, Kohat, Peshawar, Charsadda, Mardan and Sawabi districts of Khyber Pakhtunkhwa where a large number of Pashtuns joined the protest and entered Islamabad on Thursday where sit-in continues. According to an organizer of the protest, the sit-in is composed on more than 10,000 Pashtuns, comprising Pashtuns from Khyber Pakhtunkhwa and Balochistan. Addressing the sit-in, ANP Central leader Bushra Gohar demanded immediate arrest of the police officer, Rao Anwar and called on security establishment of Pakistan to shun its project of terrorism and put an end to the ongoing state sponsored terrorism and Pashtun genocide. “Blackout by media of today’s huge gathering of Pashtuns in front of Press Club in Islamabad, demanding justice for Naqeeb and end to State atrocities in FATA, has proved beyond doubt, freedom of media in Pakistan is a myth, a lie,” the well-known Pashtun nationalist Bushra Gohar, the former member of Pakistan’s National parliament Twitted.

Moreover, the head of Pakhtunkhwa Wolesi Tahreek Dr. Said Alam Mahsood in his address to the historic Pashtun procession in Islamabad said, “Our sit-in will continue until we find justice for Naqeeb and favorable solutions to other problems of Pashtuns, posed by the State of Pakistan.”

Additionally, another young leader Abdul Hai Wazir said the national enemy of Pashtuns is known and that is the military establishment of Pakistan. He urged the Pashtuns in FATA and Pakistan to firmly stand against the ongoing state sponsored terrorism in Pakistan, resulting in Pashtun genocide and human rights violations. “Pashtun genocide in Pakistan will continue, as long as Pashtuns not firmly stand to confront the disputed state of Pakistan,” he added.

Moreover, a number of tribal elders from Waziristan also addressed the procession and said Pakistan’s security forces have been planted landmines and toy bombs in the area, taking lives of children and animals. They called on the United Nations and US led international community to take immediate notice of Pakistan sponsored terrorism, human rights violations and slow motion Pashtun genocide in FATA. The tribal elders claimed Pakistan still pursuing the policy of lies and deceit in war on terror, adding good Taliban have been enjoying safe havens, training and fundraising centers in big cities of the country, while the security forces brutalizing the innocent Pashtuns across the FATA, especially Waziristan in order to deceive the international community. Based on Pakistan’s failure in running the business of FATA, the Pashtun elders called on Islamabad to withdraw its civil and military administration from FATA and demanded installation of United Nations led administration in the area and a representative Jirga of FATA to be held under the umbrella of United Nations to decide fate of FATA and to win war on terror. Separately, hundreds of hundred Pashtuns from Khyber Agency of FATA gathered on the same day near Torkham crossing-point and held a big demonstration against the security forces of Pakistan and called on it to leave the area. The protesters said Pakistan’s security forces have been slaughtering innocent Pashtuns in FATA in order to deceive the international community, adding Pakistan and terrorists are the two sides of the same coin. According to a number of analysts, Pashtun, Bloch and Sindhi springs in Pakistan is the need of the hour to pave way for liberating the suppressed nations in Pakistan and to force the country to abandon its project of terrorism. However, the United Nations and other worldwide humanitarian organization, including the Malala Yousafzai (Noble Prize) have been tight lipped over Pakistan sponsored terrorism, atrocities of Pakistan military and human rights violations in FATA.