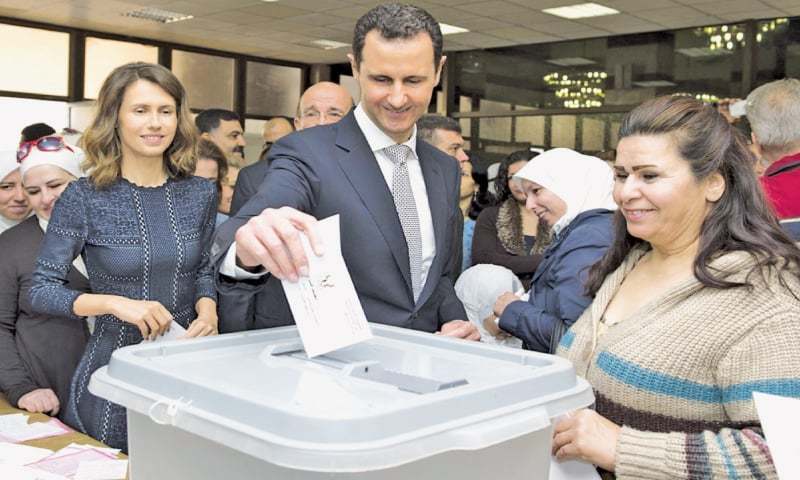 DAMASCUS: Syrians went to the polls on Wednesday in areas controlled by President Bashar al-Assad’s regime for parliamentary elections dismissed by the opposition as illegitimate.

The vote coincides with the beginning of a second round of UN-brokered peace talks in Geneva aimed at ending the devastating five-year conflict, with Assad’s future a key sticking point. Around 7,200 polling stations opened at 7am in government-held areas — about a third of the country’s territory where about 60 per cent of the population lives.

They will remain open for 12 hours unless the electoral commission decides to extend the deadline.

Assad’s Baath party, which has controlled the country for more than half a century, is expected to extend its dominance of parliament, although several parties are participating in the polls.

“I voted because this election will decide the country’s future. I hope that the winners will be true to the nation even before being true to the voters,” Yamin al-Homsi, a 37-year old who voted in Damascus, said.

Samer Issa, a taxi driver, said he had “fulfilled his national duty” by casting his vote. “Now, it’s up to the winners to fulfil their promises,” the 58-year-old added.

The presidency published photos of a smiling Assad and his wife Asma casting their ballots in Damascus and speaking to volunteers at the polling station.

The domestic opposition which is tolerated in Damascus last month called for a widespread boycott, accusing the government of using the vote to gain leverage in peace talks.

The High Negotiations Committee, the main opposition body involved in the talks, has branded the election “illegitimate”. -AFP