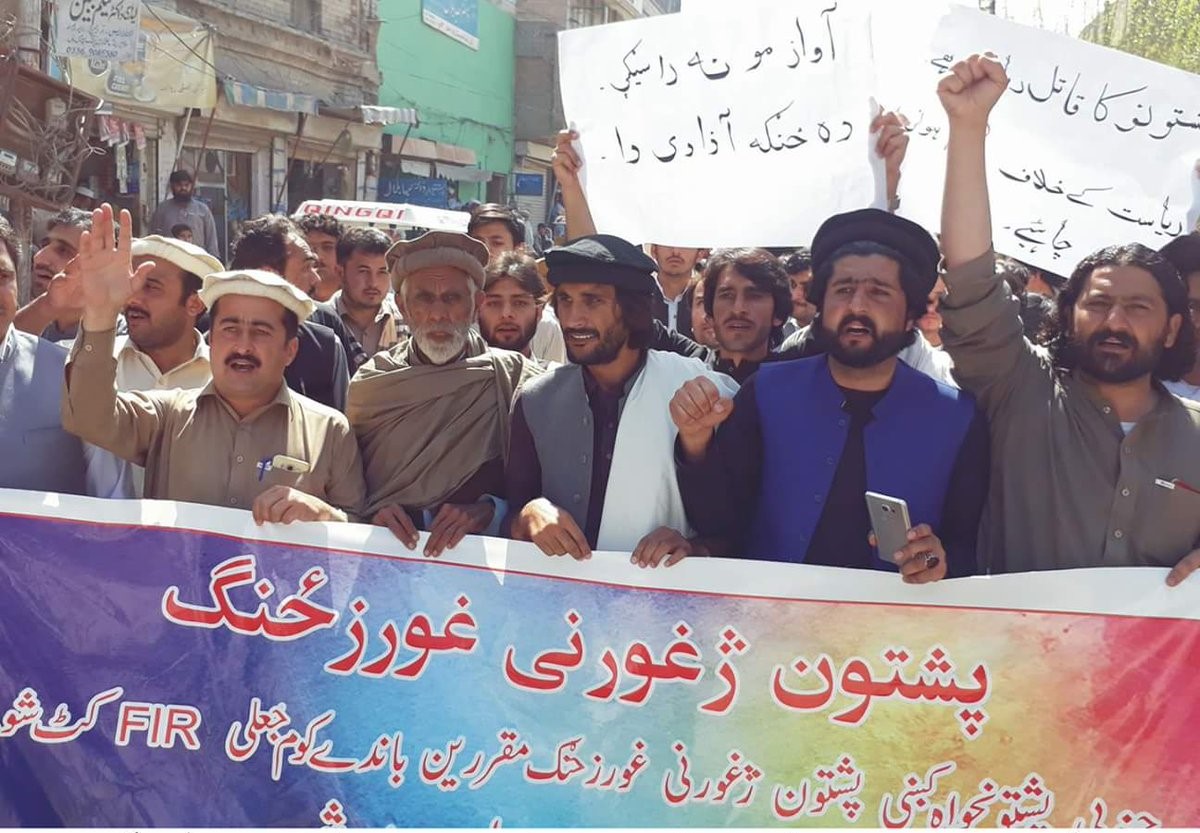 BANNU: Soon after the Pashtun Protection Movement organized a protest demonstration in Bannu against the FIRs registered against the movement’s active members just for voicing their concerns against state terrorism and seeking constitutional rights, the tribal chiefs (Malakaan) of Mamandkhel tribe vowed they will organize a rally tomorrow on Friday in solidarity with Pakistan army.

Sources said The Pashtun Times that this Friday rally has support from Pakistan army as its image has seriously been tarnished when thousands of Pashtun protestors accused the Pakistan army for supporting terrorist groups.
The famous slogan of the protestors who protested for over a month is “ye jo dehshatgardi he iskay peechay wardi hay–which metaphorically means military is behind terrorism.”
This slogan has unnerved Pakistan’s security establishment therefore sometimes it tries to bring out schoolchildren in Dir to chant in favor of Pakistan’s army and sometimes nudges tribal chiefs to organise “solidarity rally” as a part og image make-over bid.

This is pertinent to mention that thousands of Pashtuns have been carrying out protest demonstrations in every nook and cranny of Pashtun belt in Pakistan and before that they carried out a ten-day sit -in at Islamabad, the capital city of the country where they sought the arrest of a Karachi police officer who killed a handsome and modeling-lover Pashtun from the tribal belt in a fake police encounter, however, so far he has not been arrested despite that his very much own police department has declared that encounter totally fake.

Since the Pashtun Protection Movement has been organising these protests and when its activists organized a huge protest in Quetta, the capital city of Balochistan, the police registered FIRs against them, however, this act further bediveled the situation and ignited anger of the protestors as their demands are not against the constitution of Pakistan yet registering FIRs against them and declaring them as rebels is something shocking for them.

They lamented that it was a shameful act to declare the rights’ seekers as rebels through FIRs.

They said none of the demands of the Pashtun Protection Movement falls in the definition of sedition or rebellion rather contrarily the Pashtun activists have been declared as rebels just for seeking constitutional rights and demanding that military must bring ease in its curfews in the tribal belt, produce all the missing persons before the law courts, arrest Rao Anwar, the Karachi police officer, clear landmines which were planted by Pakistan’s army across the tribal belt particularly North and South Waziristan.
They said that instead of listening the demands the Pakistan’s security establishment started hitting back the Pashtun protestors, which is not only perplexing the situation but hurting Pashtuns living in the region.