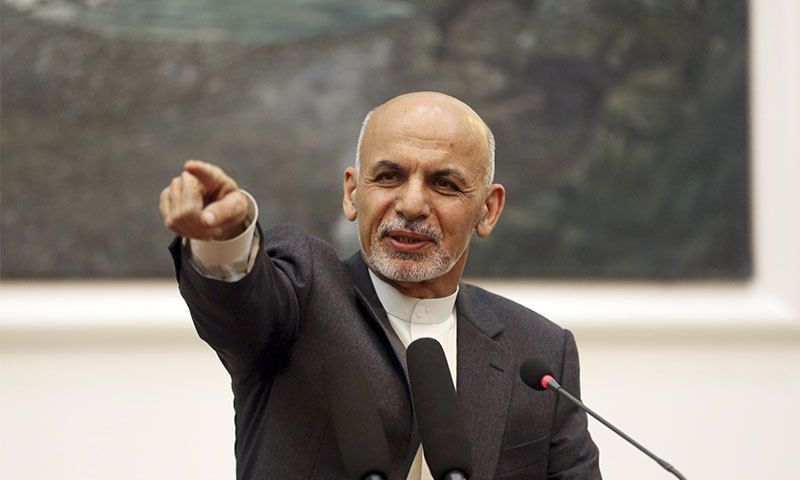 KABUL: Afghan President Ashraf Ghani on Saturday said state to state relations with Pakistan are a bigger challenge for Afghanistan than the existence of terror groups such as Al-Qaeda and Taliban.

In an interview with Geo News, the Afghan President alleged that Pakistan provides sanctuaries to terrorists and trains them, making relations with Pakistan, the bigger challenge for his country.

“We cannot understand when Pakistan says it will not allow a group of terrorists to amend its constitution, army act and prepares a National Action Plan (NAP) against them. Simultaneously, Pakistan tolerates another group which attempts to undermine the government and bring horror, death and destruction to Afghanistan,” said Ghani.

The Afghan president claimed he can provide addresses of Taliban leaders in Quetta.

Ghani claimed that Afghan forces have bombed the chief of Tehreek-i-Taliban Pakistan (TTP), Mullah Fazlullah, eleven times along with attacks on his close aides.

Ghani, earlier this month issued a similar statement, however, lauded Pakistan’s operation in the tribal areas but added Haqqani network and groups threatening Afghanistan were spared in these offensives.

Ghani rejected allegations that Afghan government had leaked the news of former Afghan Taliban chief Mullah Omar’s death, which resulted in suspension of Pakistan-facilitated dialogue between the Taliban and government in Murree.

“The news of Mullah Omar’s death came from the Taliban. We did not leak it, we just gave an official statement. After the news was leaked, we confirmed it from 19 sources, all within Taliban network,” said the Afghan president.

‘Proud of friendship with India’

The Afghan President, while answering a question, stated Afghanistan is proud of its friendship with India, as India shares Afghanistan’s democratic aspirations.

“India is a historical friend of Afghanistan, India is building dams in Afghanistan, it is a democratic country and shares our democratic aspirations,” said Ghani, adding that his country’s foreign policy is no other country’s business.

He said freedom to forge relations with other countries is the ‘essence of sovereignty and the essence of regional stability’.