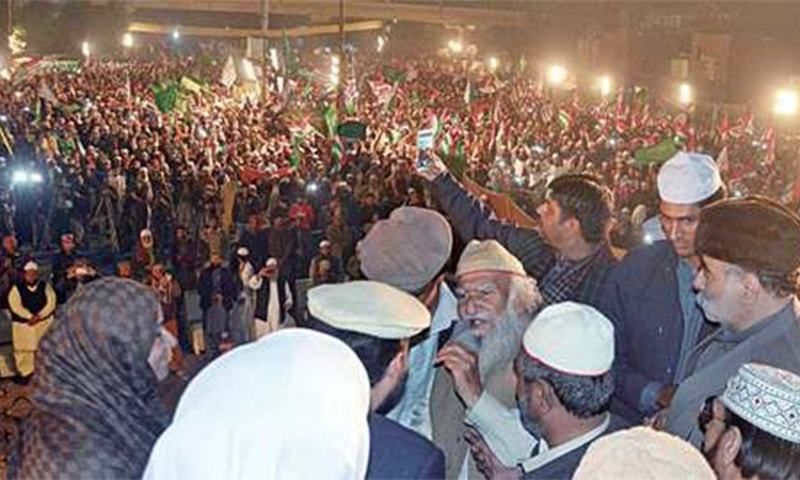 LAHORE: Pir Hameeduddin Sialvi on Saturday set yet another deadline for the government, this time for enforcing “Shariah” within seven days or risk protests in every nook and corner of the country.

Addressing a Khatm-i-Nabuwat Conference in the city, the third protest rally of its kind in the last two months, the octogenarian Pir from Sial Sharif warned if the government failed to meet the deadline, Aashqan-i-Rasool [those in love with the Holy Prophet (PBUH)] would protest in every street in the country, and it won’t stop.

Earlier two protests were held at Faisalabad and Gujranwala.

The Pir also supported the “jail bharo (fill the jails)” movement announced by the Tehreek-i-Labaik Ya Rasool Allaha, starting from Jan 27, during which the TLYR claimed 100 workers of the party would court arrests daily till all jails in the province were filled.

The conference was attended by the workers the TLYR, the Sunni Ittehad Council, the Sunni Tehreek and other ulema and Mushaikh.

The protest had originally started with a single demand of resignation by Law Minister Rana Sanaullah for his controversial remarks in a TV programme. But, on Saturday, Pir Sialvi just demanded implementation of Shariah laws in the country in seven days.

For Rana Sanaullah, the Pir advised him to recite “kalima” again and renew his faith – otherwise, he said the law minister could not be considered a Muslim.

Sialvi also directed the participants not to vote for the PML-N in the next general elections because, he said, the party had failed to punish the offenders who tinkered with the text of oath on finality of the Prophet (PBHU).

Earlier, Sahibzada Hamid Raza of the SIC and Ashrif Jalali of TLYR also advised the participants to vote against the PML-N because “it was no more a party of Aashqan-i-Rasool. They also announced support for the decisions taken by the caretaker of the Sial Sharif and pledged they won’t let the movement lose the steam.

All Aashqan-i-Rasool would continue protesting till the goals set by the conference were met, they said.

They had earlier planned to hold the conference on Jan 13 but postponed it because of Kasur incident. At Faisalabad, five of the PML-N lawmakers – two MNAs Nisar Ahmad Jutt and Ghulam

Bibi Bharwana and three MPAs Maulana Rehmatullah, Nizamuddin Sialvi (his son) and Khan Muhammad Baloch – had resigned. The Pir is thought to have political influence over a dozen lawmakers belonging to the PML-N from Sargodha division.

Saturday also turned out to be a tough day for the Lahore police and the city dwellers as more than 3,000 policemen were deployed to secure the area around the venue of the protest and one of the busiest intersections, Bhati Chowk, was closed for traffic for the entire day.

The conference proceedings were expected to start early afternoon but were delayed because of the late arrival of Pir Hameeduddin Sialvi, who led a procession of his followers from Sargodha to Lahore. -DN

2018-01-21
The Pashtun Times
Previous: US and Pakistan in heated exchange over Afghanistan in UNSC debate
Next: Norway parliament fails to protect Afghans from horrors of war

Sometimes an incident can spur a revolution. If delve into the history, ...