Army chief General Qamar Bajwa seems to be against the military’s direct intervention in politics but Khadim Rizvi and his cohorts have been making insinuations that the general might not belong to the right sect. 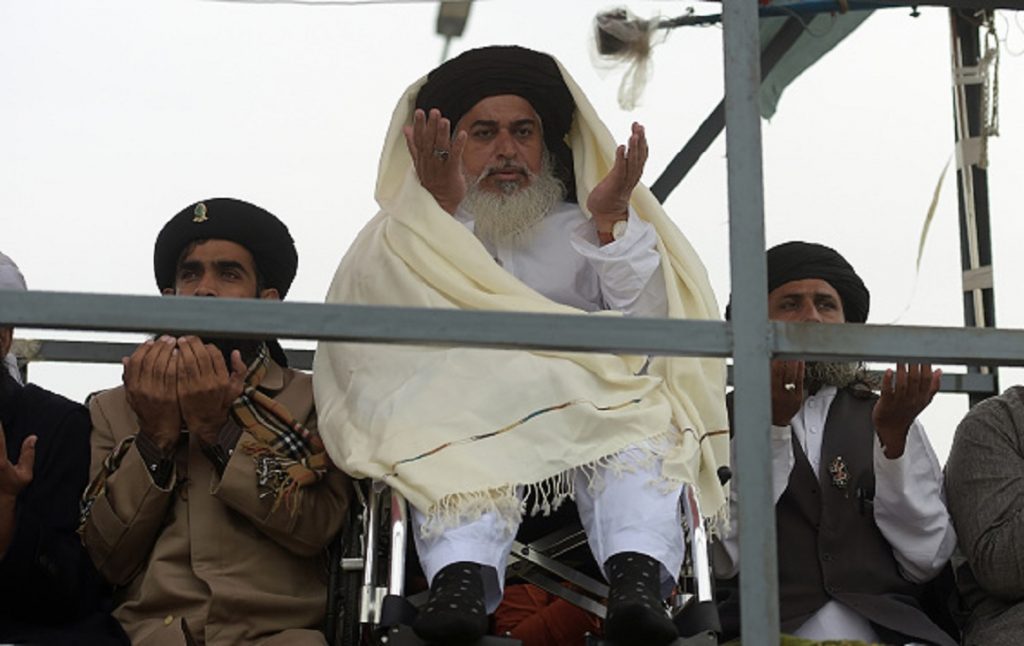 If the history of Pakistan was made into a movie, one scene would be repeated several times albeit with a new cast of characters each time: fanatics rioting in streets over some religious issue, civilian leaders attempting to alternately appease and suppress them only to discover that the situation cannot be resolved without military intervention, and the military being portrayed by its ubiquitous supporters as the country’s only saviour.

The recent troubles began when some three thousand supporters of a firebrand cleric, “many armed with sticks and iron rods,” according to wire service reports, blocked the main entrance to Islamabad since November 6. Led by Khadim Hussain Rizvi, the colourful leader of the Sunni extremist Tehreek-e-Labaik Pakistan (TLP), the protestors demanded strict adherence to Pakistan’s blasphemy laws and stricter laws against other religious sects.

A sit-in by three thousand people in a country with a population of 210 million should not be a serious threat either to law and order or to the stability of the government. But Pakistan is, and has always has been different from the rest of the world.

Rizvi, who laces his speeches with four-letter words and choicest Punjabi language abuses, is the self-appointed guardian of the ‘Prophet’s honour.’ He is also the latest Pakistani religious-political leader to rail against Hindu and Jewish agents in addition to speaking about fighting alongside the Pakistan army for Islam and Pakistan.

Rizvi’s followers were responsible for the murder of Punjab Governor Salman Taseer who was murdered by his own bodyguard in January 2011 for suggesting that Pakistanis debate their blasphemy laws.

He is one of many Sunni Barelvi clerics that were built up by Pakistan’s military-intelligence complex under the Musharraf dictatorship, and in the years since, as potentially moderate alternatives to Deobandi and Wahabi clerics who had been supported by the Pakistani state under General Ziaul Haq and during the 1990s.

The timing of Rizvi’s relatively small sit-in with larger consequences is interesting. It came after the disqualification of former Prime Minister Nawaz Sharif, his re-election as leader of the ruling Pakistan Muslim League-N, and the rejection by parliament of a bill that would have made it unlawful for political parties to be headed by someone disqualified to be a member of parliament.

Rizvi called the protests over changes to electoral laws, which he claimed unacceptably altered the language of the oath for lawmakers declaring Prophet Muhammad as God’s final prophet. The original language was restored and the government said it was a clerical error any way but that was not enough to calm Rizvi’s blood thirsty followers from threatening violence.

Between Punjabi swear words, Rizvi declared like all religious demagogues before him, “We will lay our lives, but we will not step down from our demands.” His followers chanted “Labaik Ya Rasool Allah, Labaik” (I am here, Prophet of God, I am here), not noticing the irony of declaring honourable intent in response to a cleric’s vulgar language.

The three thousand protesters got more airtime on Pakistan’s military-backed TV channels than a crowd this size deserved. That only helped make Rizvi’s sit-in as threatening as the ‘dharna’ organized by cricketer-turned-politician Imran Khan that had paralysed Islamabad for several days a couple of years ago.

Moreover, blasphemy has often been invoked to foment violent riots and vigilante justice in Pakistan, leading the already embattled government to act slowly and cautiously.

The Islamabad High Court ordered the protestors to clear the streets. When the government acted finally, with the High Court order in hand after almost twenty days of patience, it only generated widespread violence.

The army’s spokesman tweeted to appear neutral between protestors and the government, as if the army is above the government and not its part. “COAS telephoned PM. Suggested to handle Islamabad Dharna peacefully avoiding violence from both sides as it is not in national interest & cohesion,” declared Major General Asif Ghafoor, head of Inter-Services Public Relations.

It being Pakistan –the land of many coups and constant military interventions – no one can ask why Rizvi said at his rally “The military will not act against us because we are doing its work.” Rumours are afloat about the prospect of the military acting, not to prop up the beleaguered government, but to replace it with a new experiment of technocrats setting the country right.

Author Herbert Feldman had written at the end of Field Marshal Ayub Khan’s ten-year dictatorship of a sad fact of political life in Pakistan. Ayub had handed power over to his successor as army commander, General Yahya Khan, at the end of five months of rioting. In Pakistan, Feldman wrote, there was a widespread feeling that “whenever it was felt in General Headquarters that things were not going according to the taste and opinion of senior officers, the armed forces (in effect the army alone) would move in or contrive to do so”.

Army chief General Qamar Bajwa seems to be against the military’s direct intervention in politics but Rizvi and his cohorts have been making insinuations (totally unjustified) that the general might not belong to the right sect. He would have to be careful in tackling the situation in an emotionally charged environment wherein his own faith is under question.

For those who wish to understand the broader nexus between the mullahs and ambitious military officers, I have already written the book ‘Pakistan Between Mosque and Military.’ It seems that I might have to add a new chapter to the book, which was only updated a year ago. (First published in ThePrint)

The writer is director for South and Central Asia at the Hudson Institute in Washington D.C., was Pakistan’s ambassador to the United States from 2008-11. His forthcoming book is ‘Reimagining Pakistan.’