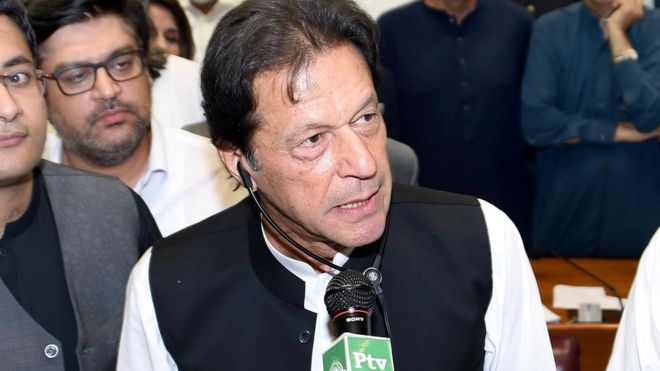 Pakistan’s July 25 election resembled an episode of the theatre of cruelty: widespread
accusation of vote-rigging, suicide bombs, at least 157 death and over 200 wounded,
internationally designated terror suspects allowed to contest, the former prime minister behind
bars, 370,000 troops deployed to the polling stations and the army officers had the power of
magistrates, and at the end, the winner, Imran Khan, the sport playboy-turned political leader.

The worst hit by the election were an estimated four million Ahmadis of Pakistan who were
barred from voting. The irony is that the leaders of the Ahmadiyya community played a pivotal
role in the creation of Pakistan itself in 1947. The world still remembers Chaudhry Zafarullah
Khan—Pakistan’s first foreign minister and once the leader of all-India Muslim League who
authored the resolution of the independent Muslim country in 1940 in Lahore, Sir Mohammad
Iqbal—the country’s national poet who, according to Tariq Ali converted to Ahmadiyya Sect,
and the country’s Nobel laureate, Abdus Salam.

For Imran Khan, however, Pakistan turned out to be a promised land. The growing mistrust
between Pakistani army and the two dynasties, Nawaz Sharif and Bhutto, which alternatively
ruled the country for decades left Pakistani generals with no choice but to cherry-pick Khan.
A Gallup poll gave Sharif’s party in May a 13-point lead over Imran Khan.

Khan’s ascent to the upper-crust of Pakistani politics was much painless than his rise to the
global fame as a cricket hero. In the early 1990s, he was first discovered and groomed by
General Hamid Gul, the ex-director of Pakistan’s feared military Intelligence, the ISI. Hamid
Gul was also the chief incubator of the most lethal and ideologically driven religious
extremists, including the Haqqani network. Khan set up his Tahreek-e-Insaf, TIP, (Justice
Party) in 1996 and used all his guile and fire-breathing rhetoric to cultivate himself as a fighter
for the rights of the poor, an anti-corruption crusader, an anti-American, and a pious Muslim.

Earlier this year, Imran Khan’s ruling party in the Pashtun dominated Khyber-Pakhtunkhwa
province allocated US $3.00 million to the Haqqania madrassa, which is famous as the old
‘university of terror’. Among the alumni of the madrassa are Mullah Omar, Jalaluddin
Haqqani, and an Al-Qaida leader, Asim Umar. This generosity takes place at a time that Khan’s
party shut down 42 public schools for budget restriction in the tribal areas.

The Janus-faced Khan is a Pashtun by birth, but in truth, he is a model Punjabicized (Punjab is
the home of the majority of Pakistani generals) Pashtun. The Pashtun Saplai (chappal) he is
wearing is the only mark of his Pashtun bloodline. In his book, Pakistan: A Personal History,
he is not ashamed of mocking his religiously minded fellow tribesmen, “For these resilient
people, the existence of God and life after death were as obvious as the sun and the moon.” In
his victory speech, Khan pledged that he will build a new Pakistan, inspired by the kind of a
state that Prophet Muhammad founded in Medina. But the farrago of his styles makes this
statement looks like a non sequitur joke. After less than ten months he divorced his ex-wife,
Reham Khan just by sending her a text message when she refused to allow Khan’s pet dogs to
their bedroom. In her book released now on Amazon, she alleges that Khan was a sex maniac,
cocaine user and always in with a gay relationship with his senior party members.

One of the major tests Khan will be facing is the rising Pashtun insurrection known as Pashtun
Protection Movement (PTM), which has broken Pakistan’s heaviest taboo by several massive
anti-army rallies across Pakistan since the beginning of the year. Two of the PTM campaign
slogans: this terrorism that you see, the uniform is behind it; Pashtuns of Up and Down
(Afghanistan and Pakistan) are all Afghans seem to be too ominous to the ears of Pakistani
generals. The movement is openly pillorying Pakistani army of extrajudicial killing,
widespread disappearances of men and women, looting, and unlawfully incarceration of the
Pashtun minority in Pakistan. The 24-year old leader of the movement, Manzoor Pashteen
recently said in an interview, “we don’t know much about Imran Khan, but we know one thing
very clear and that is that we will never give up on our fight for the rights of the Pashtuns.”
The military so far has exercised utmost prudence in this matter, but surreptitiously, it is
signalling a hardnosed approach to the demands of the Pashtuns who suspect Pakistani military
of subverting their liberties. The military, for example, has reorganised its ‘good Taliban’ in
the ‘security committee’ in the tribal areas to eliminate members of the movement. For fear of
an entrenched pro-separatist sentiments among the ethnic Baluchs and Pashtuns, the country’s
military is going to deploy an additional 60.000 troops to boost its patrols of Pakistan’s disputed
border with Afghanistan known as the Durand Line. The role of Imran Khan in dealing with
the Pashtun uprising is yet to be seen.