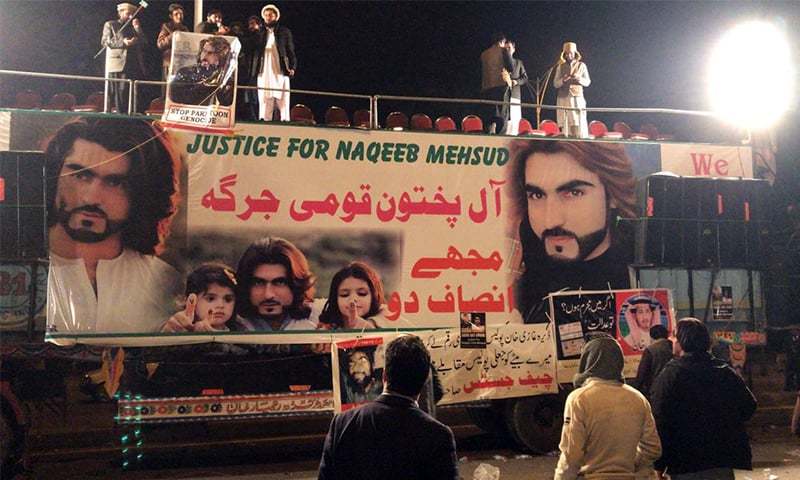 Hundreds of people from the tribal areas rallied in Islamabad on Thursday, demanding the arrest of suspended SP Rao Anwar who has been accused of killing 27-year-old aspiring model Naqeebullah Mehsud in a staged ‘encounter’ in Karachi.

The protesters had gathered in front of the National Press Club in the capital to demonstrate against the killing. A large banner displayed on a stage set up at the site read, “Justice for Naqeeb Mehsud”.

Holding portraits of Mehsud, the protesters threatened to hold a sit-in outside the parliament if Anwar is not arrested.

They demanded that a judicial commission headed by the chief justice be formed to investigate extrajudicial killings of Pakhtuns in Karachi and other areas.

The missing persons should be presented before courts and those found to be innocent should be released, they demanded.

The protesters also asked that the imposition of curfews in Fata, especially Waziristan, after any incident should be ended and that landmines should be cleared in various areas of Waziristan.

The demonstrators left the protest site late on Thursday but said they would return in the morning to continue the protest.

A similar protest that was being held in Karachi’s Sohrab Goth area to protest Mehsud’s killing was called off on Wednesday after nearly two weeks.

An inquiry committee, formed by Inspector General of Police (IGP) Sindh A.D Khowaja, concluded that Naqeebullah did not have links to any militant outfit and was killed extra-judicially. The investigation report led to Khowaja removing former SSP Malir Anwar from his post on January 20.

Anwar is currently in hiding and the Supreme Court, which has taken a suo motu notice of the incident, has given police 10 days to arrest him. -AP

By Shakeel Qarar
2018-02-02
The Pashtun Times
Previous: The Gandhi in our midst
Next: Evidences shared with Pakistan, we asked for action: Afghan Govt