Muslims, South Asians are targeted for their faith and looks: US A-G 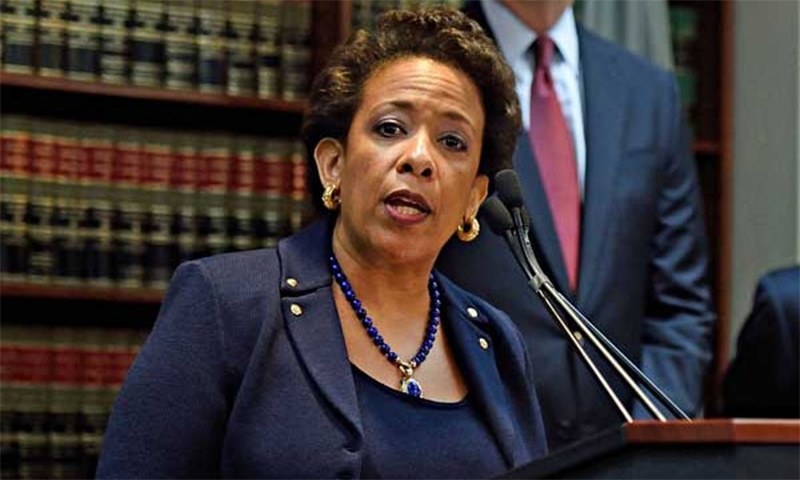 US Attorney General Loretta E. Lynch says Muslim, Arab, Sikh and South Asian Americans are often the target of threats because of their appearance or religion.─AFP/File

WASHINGTON: Muslim, Arab, Sikh and South Asian Americans are often the target of threats because of their appearance or religion, according to US Attorney General Loretta E. Lynch.

On Wednesday, the US Department of Justice launched a nationwide campaign to protect these groups from a backlash that followed recent terrorist attacks in Brussels, Paris and San Bernardino, California.

The department has also included law enforcement and community leaders in this campaign to make it more effective.

“There is no place for intolerance in our country,” said Mr Lynch in an appeal released with the campaign. The department plans to hold 14 events in 11 districts in the next two week to expedite legal actions for countering this backlash.

It also launched a new interagency initiative to combat religious discrimination throughout the country. From April 12 through May 6, Attorneys in California, Colorado, Connecticut, Idaho, Louisiana, Massachusetts, Michigan, Minnesota, New Jersey, Ohio and Utah will work with community leaders and law enforcement to address discrimination, violence and harassment targeting people because of what they look like, which country they come from or where they worship.

The Justice Department announced that the aim of this campaign was to reaffirm the commitment to protecting civil rights and preventing and prosecuting hate crimes.

“The Department of Justice is determined to uphold the fundamental principle that all Americans should be free from violence and protected from hatred no matter who they are, what they look like, or where they’re from,” Mr Lynch said.

“These events underscore our ongoing commitment to safeguard the civil rights of every American — including Muslim, Arab, Sikh and South Asian Americans, who are so often the targets of threats on the basis of their appearance or religion.”

Mr Lynch said that even after the campaign was over, the Department of Justice would continue to work with local law enforcement partners and community leaders to defend the safety and dignity of all American people.

During the last several months, individuals who are, or who are perceived to be, Muslim, Arab, Sikh and South Asian have been targeted for harassment and violence around the country, said a Justice Department report released with the campaign.

A Connecticut man pleaded guilty to firing a high-powered rifle at a mosque; a Florida man pleaded guilty to threatening to firebomb two mosques and shoot their congregants; a former Missouri man pleaded guilty to violating the civil rights of others by leading a conspiracy to deface a local Islamic centre with graffiti and burn two copies of the Holy Qur’an; and a New York man was sentenced to 13 months in prison for emailing death threats to the executive director of an Islamic advocacy group. -DAWN, ANWAR IQBAL