Kalash fight for their identity with Unesco bid 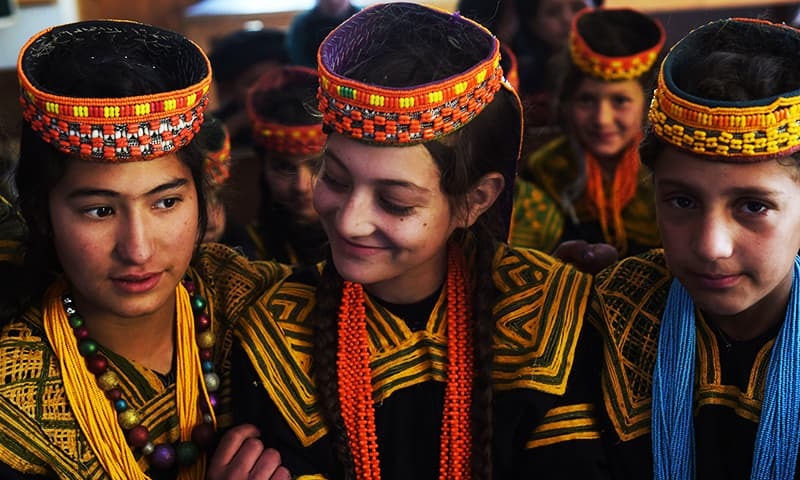 Kalash students attend a class at a school in the Brun village of Bumboret valley. ─ AFP

CHITRAL: Pakistan’s smallest religious minority, the Kalash speak their own language and celebrate their gods through music, dance ─ and alcohol, which they brew themselves in Chitral’s plunging verdant valleys.

Here, the sexes mingle easily, marriage can be sealed with a dance, and women are free to move on to new loves ─ it is a far cry from life in much of the rest of the country, where many adhere to a strict religious and cultural code. 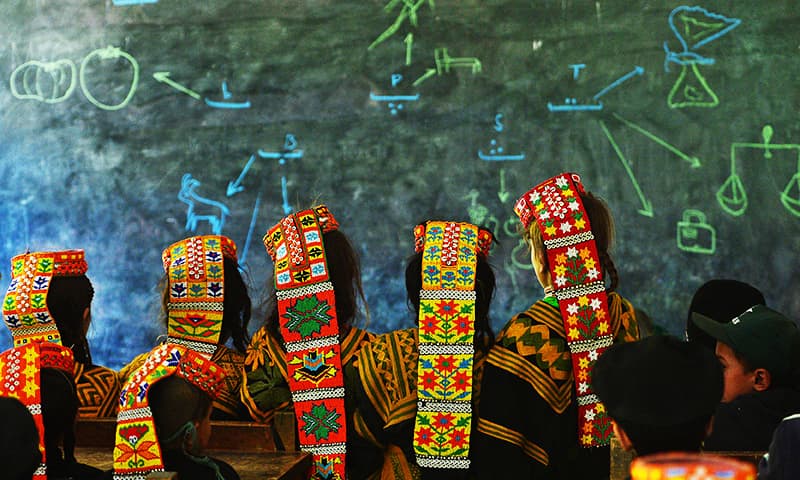 Kalash students attend a class at a school in the Brun village of Bumboret valley. — AFP

Yet the Kalash fear their unique culture will not endure: Increasingly their youth are converting to Islam, prompting activists to campaign to preserve the traditions of this ancient, diminishing tribe.

Their fight to get the Kalash on to Unesco’s Intangible Cultural Heritage List began in 2008, but eight years on remains mired in sluggish bureaucracy.

With their fair skin and light eyes, academics have speculated the Kalash might be descended from the ancient Middle East or even from soldiers of Alexander the Great’s army, which conquered the area in the fourth century BC. 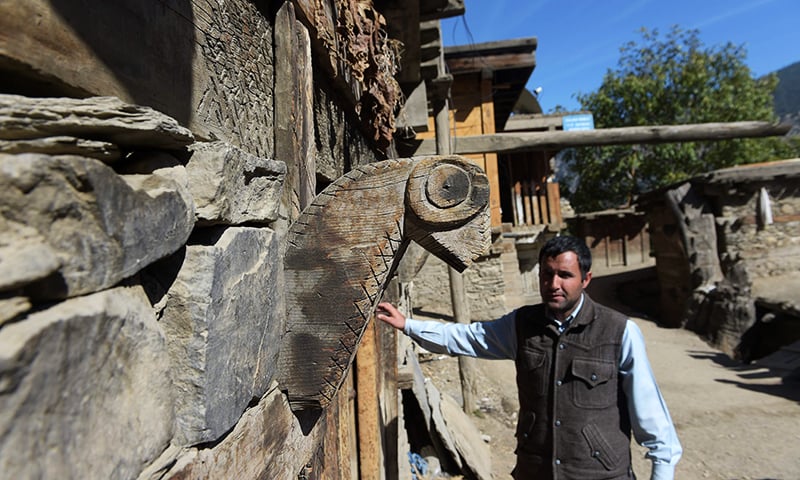 Kalash Peoples Development Newtwork (KPDN) activist Luke Rehmat stands at the door of a Kalash building of worship in Brun village in the Bumboret valley. — AFP

Centuries ago they ruled Chitral but now they number just 3,000, according to the Kalash Peoples Development Network (KPDN). Today, the Kalash say their traditions are under threat.

At school, children take a compulsory class on Islam but not about their own traditions, which are becoming more and more difficult to follow as the Kalash move away from their agrarian lifestyle and towards trade, studying or working in the cities.

Some face anger from Muslim neighbours in the region, who believe God is enraged by the tribe’s un-Islamic practises and has unleashed natural disasters ─ floods and earthquakes ─ on the area as punishment.

Under such pressure, more and more end up converting to Islam. 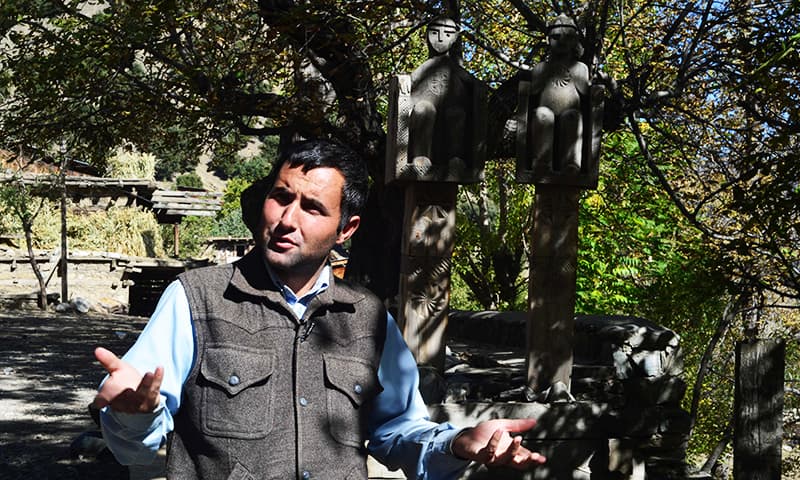 “The Kalash are a living civilisation and need to be protected legally through the government of Pakistan,” says KPDN activist Luke Rehmat.

He accuses government officials of not taking the Unesco bid seriously, adding: “So far there is no positive work on this.”

The unique Kalash festivals and rituals mean the tribe do fit the criteria for the list, says Jawad Aziz, a cultural officer at Unesco in Islamabad. 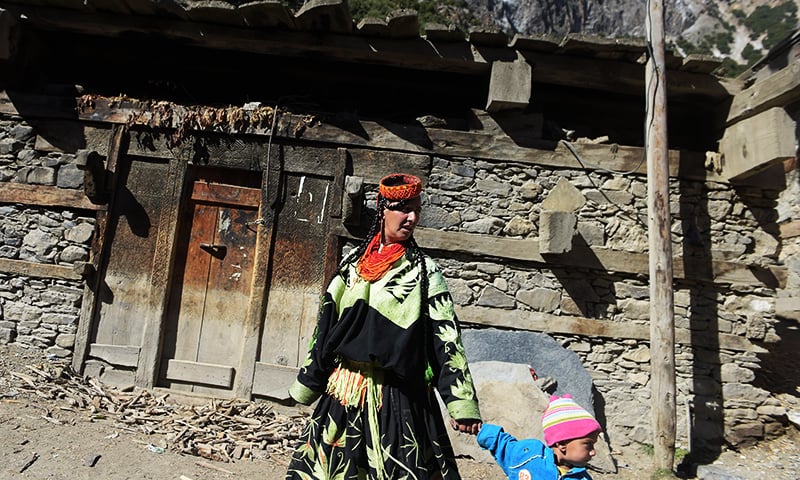 In this photograph taken on October 31, 2015, a Kalash woman walks with a child past a Kalash house of worship in the Brun village of Bumboret valley. — AFP

Among the more colourful of the Kalash traditions is the “bashali”: the house in every village where women are required to stay during their menstrual cycle.

Kalash women are considered “impure” during their periods, during which they are not supposed to touch others.

Instead they retreat to the bashali, off limits to men, where they spend their days in peace reading books and sewing as family members leave food for them on the doorstep. 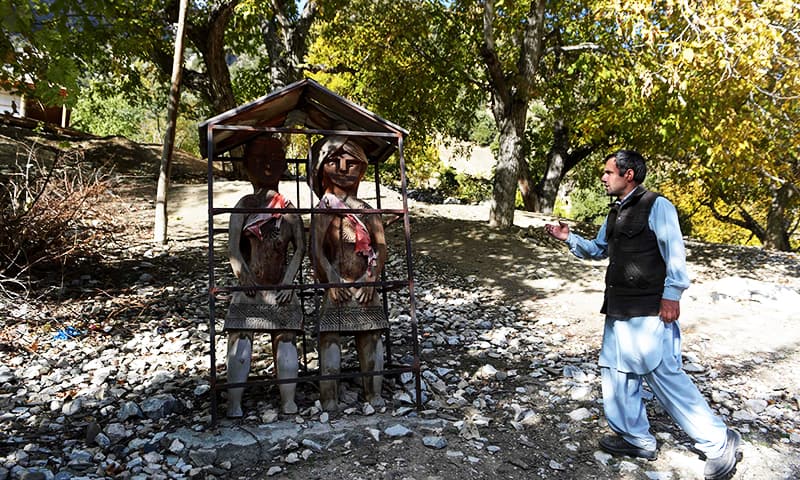 Kalash Peoples Development Newtwork (KPDN) activist Luke Rehmat stands near an altar during an interview with AFP in Brun village in the Bumboret valley. — AFP

The Kalash also do not mourn their dead, instead celebrating what Rehmat described as “the completion of the journey” that begins with birth with three days of dancing, music and feasting.

Marriage can be agreed by a dance, before the couple run off to his parents’ house ─ only welcome back in the Kalash community when they visit the parents of the bride.

But the woman has the right to leave her husband and marry another ─ should her new lover be willing to pay the price she sets.

Aziz said consultations between his organisation, the government and the Kalash were held in 2012 ─ but there has been no official communication since then. 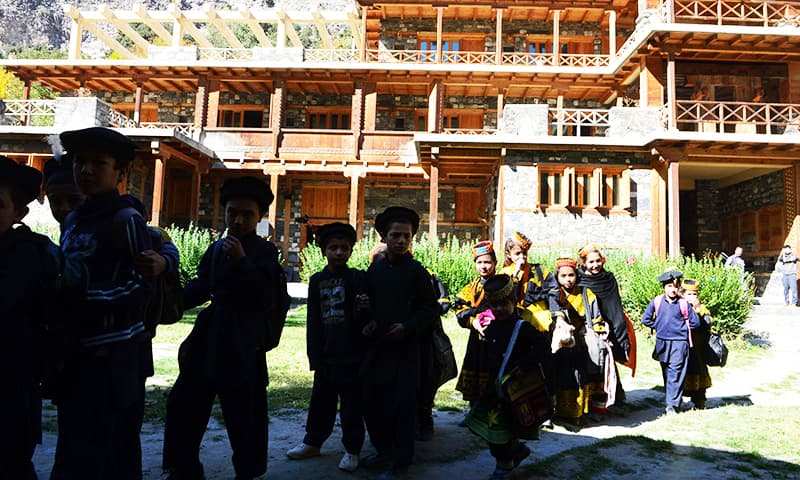 “The government of Pakistan has not submitted any dossier so far either for preservation of the Kalash cultural heritage or to safeguard any endangered part,” he said.

“The procedure to be included in the Unesco list is quite a lengthy one and in other countries they have separate organisations (to help carry out the process),” said Sajid Munir, a spokesman for the National Institute of Folk and Traditional Heritage, which hosted the original consultations in 2012.

He said the institution, known locally as Lok Virsa, has been working to preserve Kalash culture since the 1980s, and still plans to get the tribe on to the Unesco list.

Local authorities in Chitral said they were also fighting to preserve Kalash identity.

The valleys have long attracted tourists for their natural beauty and their brush with legend as the home of the tribe. 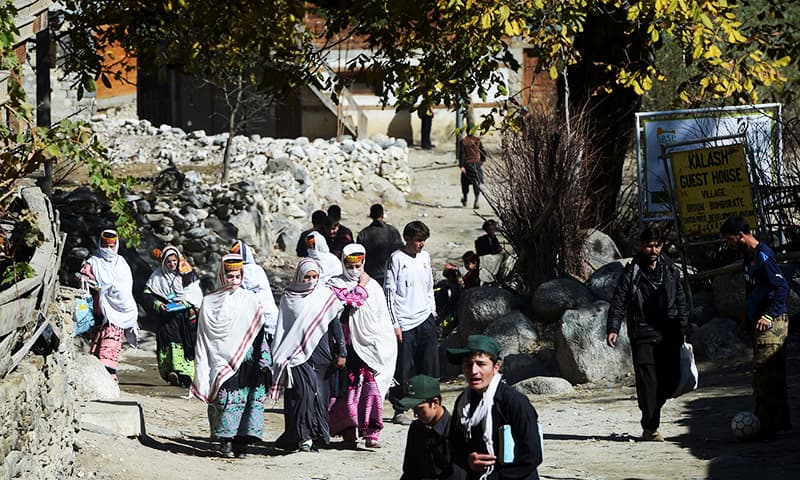 Kalash students return from school in Brun village of the Bumboret valley. — AFP

“When I was appointed here, my superiors stressed that I should concentrate particularly on the Kalash community and make efforts for the preservation of their culture,” Osama Ahmad Warraich, the district administration official of Chitral told AFP.

“The locals said they needed sanitary pads in the bashalis and now we are providing that. We have plans to renovate their places of worships and festivities.”

Rehmat dismisses the government efforts, however. “Every time, they say that Kalash people are living near our hearts,” he said.

“If we are living very close to them then why are all these things happening?” he asked, referring to the tribe’s struggle to preserve its cultural heritage.

At any rate, said Unesco’s Aziz, being included on the list “gives no guarantee of protection”. -AFP