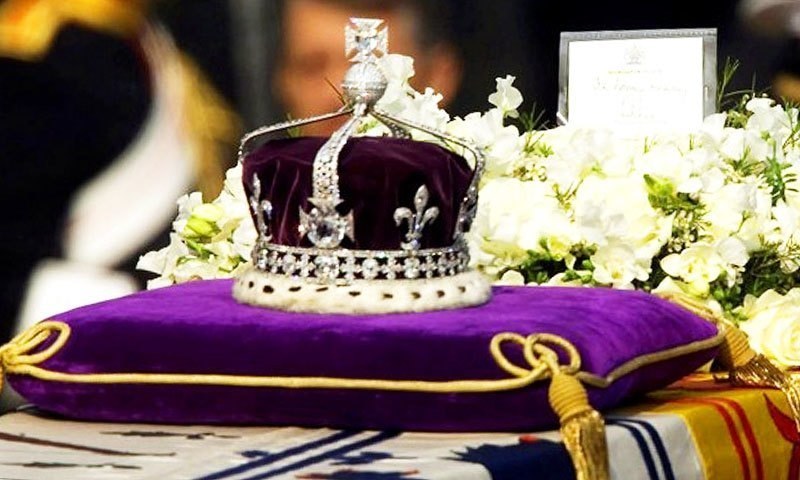 The Kohinoor, or “mountain of light,” diamond, set in the Maltese Cross at the front of the crown made for Britain’s late Queen Mother Elizabeth. ─AP/File

NEW DELHI: The priceless Koh-i-Noor, which is a part of Queen Elizabeth’s crown, was given to Britain and not stolen, India’s government on Monday told the Supreme Court, which is hearing a suit seeking its return.

The 108-carat Koh-i-Noor gem, which came into British hands during the colonial era, is the subject of a historic ownership dispute and has been claimed by at least four countries including Pakistan and India.

But India’s Solicitor General Ranjit Kumar said the 19th-century Sikh king Ranjit Singh had given the stone to the British.

“It was given voluntarily by Ranjit Singh to the British as compensation for help in the Sikh Wars. The Koh-i-Noor is not a stolen object,” he told the Supreme Court.

The court was hearing a suit filed by the All India Human Rights & Social Justice Front, a non-governmental organisation, seeking the diamond’s return.

It asked the solicitor general to file an affidavit giving the government’s stance on the issue.

The stone was presented to Queen Victoria in 1850 after the Anglo-Sikh wars in which Britain gained control of the Sikh empire of the Punjab, which is now split between Pakistan and India.

Singh in turn had taken it from an Afghan king who had sought sanctuary in India.

The diamond had been an heirloom of the Afghan monarchy and before then was in Persian royal hands, but its true origins remain a mystery.

Its name translates as “Mountain of Light” and it is traditionally worn by a queen – it is said to bring bad luck to any man who wears it.

In 1976 Britain refused a request to cede the diamond, citing the terms of the Anglo-Sikh peace treaty.

“I could not advise Her Majesty the Queen that it should be surrendered,” said Jim Callaghan, prime minister at the time.

It must be mentioned here that Pakistan has never backtracked from its claim over the gem and the Lahore High Court is regularly hearing apetition filed by a lawyer, who maintains that Queen Elizabeth has no right to have the Koh-i-Noor diamond as it was a cultural heritage of Punjab and its citizens owned it.

Earlier this month, LHC reserved its verdict on the case and maintainability of the petition. -AFP