Obaid-Chinoy has a legitimacy problem that needs to be addressed to restore her credibility as an unbiased and professional film-maker. 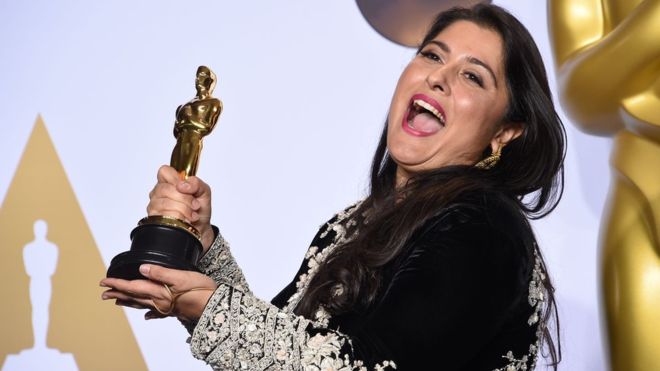 Pakistan army’s strategic depth policy has had devastating consequences for people of the Federally Administered Tribal Areas (FATA). The area was handed over in de facto manner by Pakistan  army to its  proxies, the  Taliban, since 9/11. The Taliban disrupted life in the area through terror and violence on a scale never experienced the locals in their past history. Under the military controlled access to information and narratives about area, the Taliban  were promoted nationally and internationally as heroes of the area under ‘legitimacy’-invoking titles, such as ‘Pashtun nationalists’, ‘warriors for social justice’, ‘fiercely autonomous freedom fighters’ resisting the Pakistan army ‘encroachments’ in the area and so on. But all this failed to smoke screen Pakistan army’s  duplicity in dealing with the Taliban. 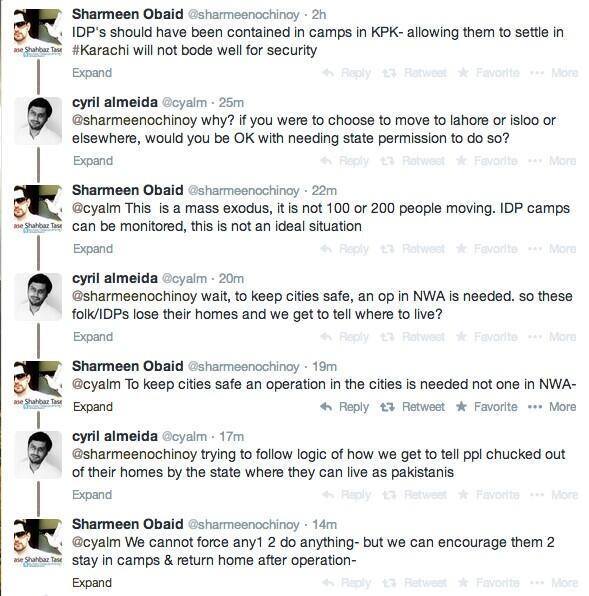 Resultantly, Pakistan army started half-hearted military operations in FATA under the US pressure. The operation generally gave safe passages to Taliban militants, but flattened the area’s infrastructure to the grounds and killed and injured countless people. As early as 2010 a Pakistan army general has publicly announced that the army had conducted over 1000 small and large military operation in the area. Pakistan air force chief admitted in 2011 to have rained  the area with bombs in 5500 air strikes. Resultantly, people fled the area as Internally Displaced Persons, IDPs, to other parts of Pakistan. The whole situation made the people vulnerable to multiple and intersecting  forms of discrimination and exploitation  by both state and non-state actors.

Since then, countless reports have emerged about mishandling of ordinary Pashtun at the hands of security personnel. Meanwhile, humanitarian activities of state institutions for relief and rehabilitation have not been able to cater to the needs of all IDPs, especially the poor. The state-dominated humanitarian assistance system is gender-biased, leaving many women without assistance, especially those without adult male family members. There have been several reports of cases of sexual exploitation of women in IDPs camps.

Add to the foregoing the continuance of oppressive Pashtun socio-cultural norms and we’ll get a sense of the intersecting forms of exploitation based on ethnicity, class, culture and gender that the FATA people remain subjected to.

Recently, Pakistan’s only Oscar Award winning film-maker Sharmeed Obaid-Chinoy announced her plan to make a film on the plight of FATA people.

However, some prominent social activists in FATA and Khyber-Pakhtunkhwa province reportedly approached by Obaid-Chinoy for interviews refused to facilitate her film project – even though these activists have always cooperated with media, NGOs and anyone from outside of the region who has wanted to highlight human suffering in FATA.

These activists include Noreen Naseer, a faculty member at Peshawar University; Shahida Shah, a Peshawar-based women’s rights activist; and Mohsin Dawar, an ANP politician. Dawar also raised the issue on the social media where most respondents expressed opposition to the project.

Their reason: Obaid-Chinoy’s insensitive tweets in 2014 in which she had suggested that movement of IDPs from Waziristan should be restricted to IDP camps in Pakhtunkhwa province. She held that allowing the IDPs to come to Karachi will expose the city to security threats.

Obaid-Chinoy’s statement about the IDPs is problematic on two counts. One, it displays utter disregard for the rights of people of FATA as citizens of Pakistan. Being citizens of the country, they have the right to unrestricted travel to any part of the country where they can settle down as well. Thus, Obaid-Chinoy’s tweets went beyond even the draconian Frontier Crimes Regulation (FCR) as it asked for more restrictions on citizenship rights of the FATA people.

Two, instead of questioning the strategic depth policy of Pakistan army generals that has caused indefinite insecurity in Waziristan and other tribal agencies – as well as in rest of Pakistan – she treats the entire displaced civilian population, including women and children, as a security threat.  The undertone of her comments is racist. She equates all Pashtun with the wild Taliban, which in turns implies that the IDPs are not fit to live in the ‘civilized’ mainland Pakistan and should be ‘quarantined’ to their own area in the ‘wild’ northwest of the country. Her comments fit well with the narrative espoused by segments of the Pakistani media analysist that all Pashtun are Taliban sympathisers.

Additionally, Obaid-Chinoy’s past record of film-making is also problematic. Rukhsana, a Pakistani acid attack victim, who participated in one of Obaid-Chinoy’s documentary films, Saving Face, has publicly accused her of exploitation. In a video available on the Internet, tearful Rukhsana alleges that the film-maker promised, in lieu of participation in the film, to help her with plastic surgery and monetary assistance, but never fulfilled her promise. Obaid-Chinoy rejected the allegations but this does not settle the issue. There is a clear unequal power relationship between Obaid-Chinoy and Rukhsana. One is educated woman and belongs to the upper middle class and the other is a victim of acid attack with poor socio-economic background.  Obaid-Chinoy fails to address the power inequality with necessary sensitivity.

By a minimal standard of ethical consideration in any creative work, like film-making, the artist is expected to reflect a lot on the unequal power relationship and take all appropriate measures to ensure that the weaker party, in this case Rukhsana, does not feel exploited and humiliated. Not only did Obaid-Chinoy fail to do so, but she also reportedly dismissed Rukhsana’s allegations. Could Obaid-Chinoy treat Rukhsana the way she did, if Rukhsana were a white American woman? Why is it so damn easy to disregard ethical standards when it comes to the poor in Pakistan?

Obaid-Chinoy’s 2014 tweets about IDPs displayed utter disregard for the citizenship rights of the FATA people. Instead of questioning the strategic depth policy of the Pakistan army, she treated the entire displaced civilian population, including women and children, as a security threat.

With this baggage at hand, Obaid-Chinoy’s announcement that she wanted to make a film on FATA women was bound to raise eyebrows, as it did. It is not easy to believe that she will be sensitive to the vulnerability of FATA women’s intersecting forms of discrimination rooted in ethnicity and class as well as gender. It is not clear how would she ensure that her film is not coloured with racism? Obaid-Chinoy has a legitimacy problem that needs to be addressed to restore her credibility as an unbiased and a professional film-maker. As things stand right now, her film idea appears little more than an attempt at self-promotion.

At the very least, she should tender an unconditional apology for her racist comments about the Waziristan IDPs. She should also work to raise public confidence in her ability and to negate the perception that she will eventually leave her would-be film participants from FATA insulted and exploited, like Rukhsana.

Pakistani media routinely ignores the suffering of the people of FATA. This necessitates that independent actors and organisations with access to wider public in the world and in Pakistan come forward, if and when possible, to highlight the issue. These independent actors and organisations are requested to abide by at least the minimal ethical standards in their professional work. This will ensure the integrity of their work as they highlight human suffering in FATA. 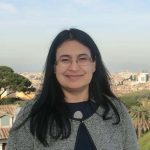 The writer is a Pashtun from Jungle Khel, Kohat, in the northwest of Pakistan. She lives transnationally in Norway and Pakistan since August 2002. Dr. Farhat Taj has PhD degree in Sociology of Law (2013) from the University of Oslo, Norway. She is former NORAD fellow at the Center for Women and Gender Research, University of Bergen, Norway, where she did M.Phil in Gender and Development (2002-2004).