‘Growing up in Afghanistan as an artist – A young Afghan artist, Nesar Ahmad Eesar talks to Angelina’

Yet it is Afghanistan that continues to inspire my work. Through my work I have been able to portray memories of Afghanistan while studying here in Indonesia. 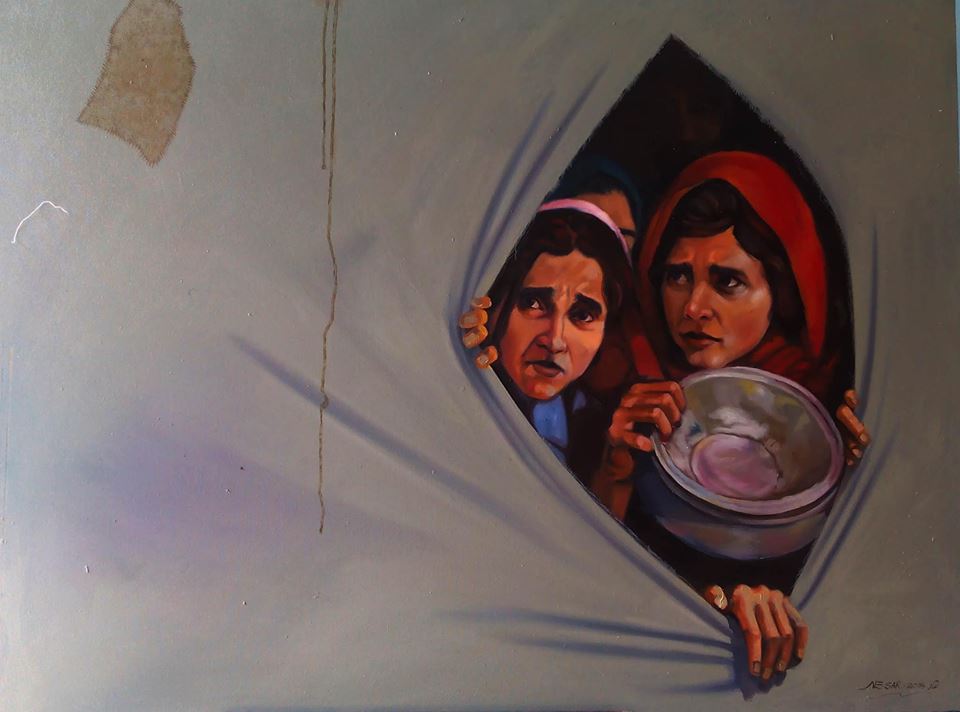 Nesar Ahmad Eesar in an exclusive interview with THE PASHTUN TIMES said:

Merisi: Could you tell me a little about your early life, your childhood growing up in Afghanistan?

N.A. Eesar: I was born in 1990 into a very religious Pashtun family. We lived in Ghazni, Afghanistan. My father was the Imam at the local Masjid where he taught Islam. He was one of the well-known Mojahidin in my home town until 1992 when he passed away. I was two years old at the time. My mother, five brothers, two sisters and I were left. We were a poor family. 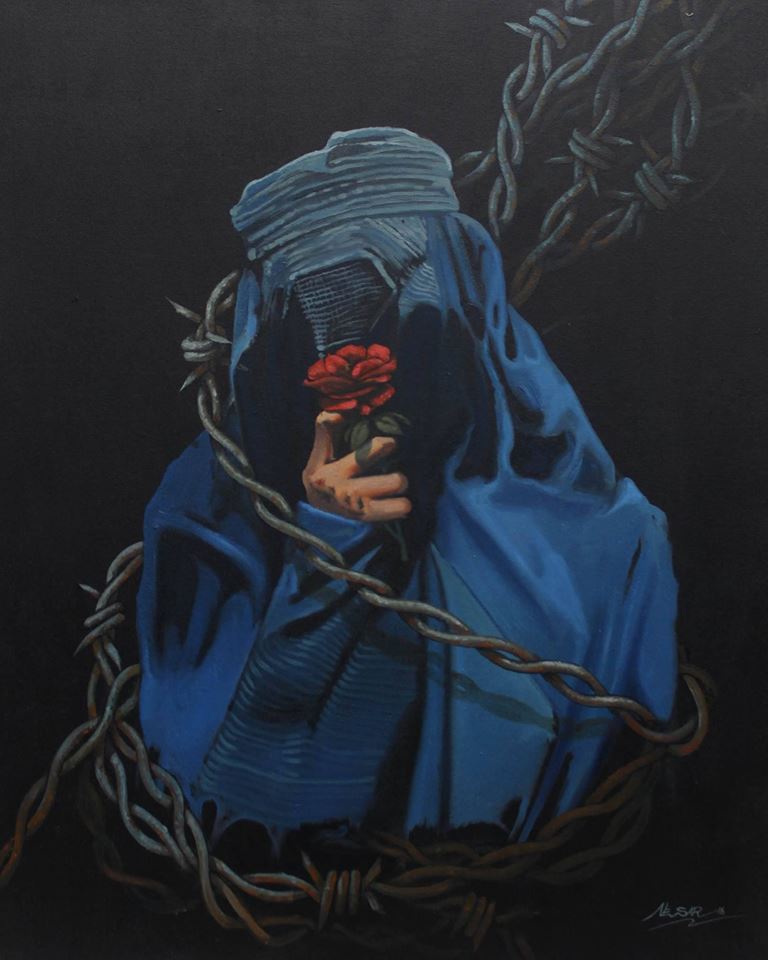 Merisi: To what extent did your childhood in Afghanistan inspire/inform your work as an artist. Did your family accept your choice of career?

N.A. Eesar: Life in Afghanistan at that time was very hard. Nobody in my family encouraged or agreed with my dream to become an artist except for my elder brother. It was a very difficult time. However, I found a way around these difficulties by initially taking up the art of Calligraphy. I can safely say that the vast majority of Afghan people love Islamic art. I found this experience very positive and a great way of socialising. When I was eight years old, my family began building a new house. There was a young man working on the house. I don’t remember his name, but his father’s name was Nadar Ali. Everyday after work, this young man would take out his sketchbook and begin to draw portraits. I was fascinated with his sketchbook, which I checked out everyday. One day while checking, I noticed one unfinished portrait, so I tried to finish it. The young man came in and when he saw me drawing in his sketchbook he became very angry with me. From that day onwards, I always tried to have my own sketchbooks to do my drawings. So I can say, I began drawing at the age of eight. After my eldest brother, Mohammed Ayaz Tarnak got married, he began living in Kabul. One day he saw my drawings. Shortly afterwards, he took me to Kabul to meet his artist friends. I began learning from them. I spent two years there from 1998 – 2000. I wasn’t attending mainstream school at that stage. I was just learning the art of Calligraphy and painting. My calligraphy teacher was named Niamatullah Hanif and my painting master was Mr. Anzorgar, who was a lecturer in the art department at Kabul University. During my time, while studying painting, people kept telling me that I should not be learning painting as it is Haram in Islam. But I was doing what I loved. Painting and calligraphy came naturally to me. 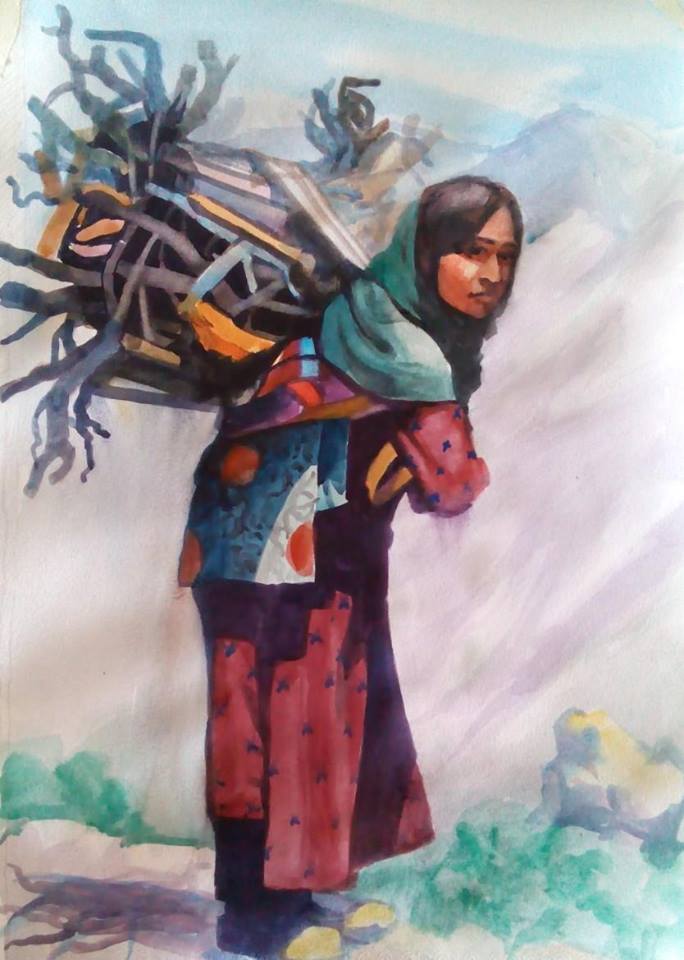 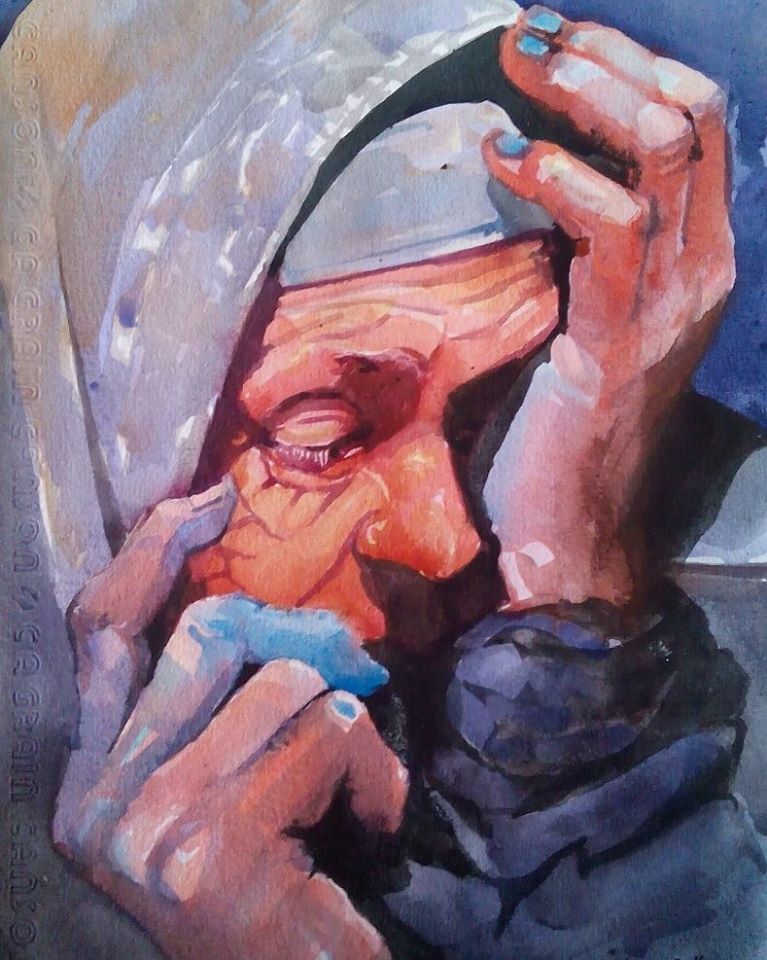 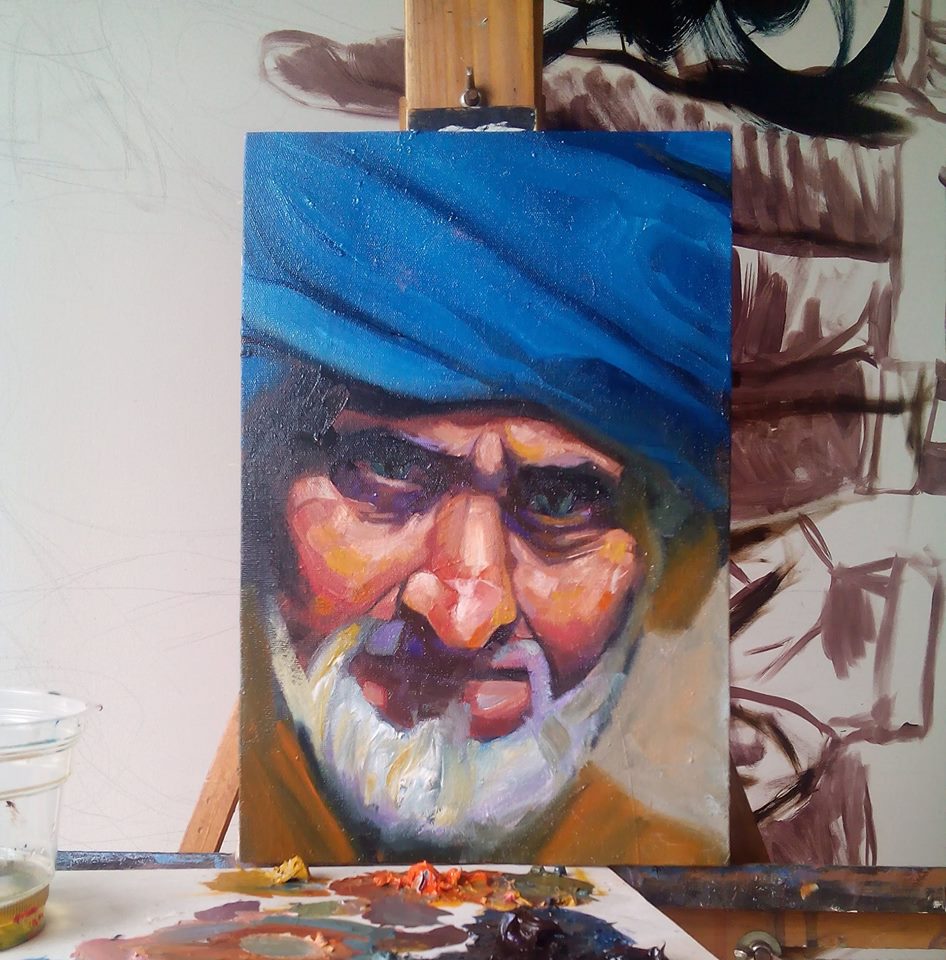 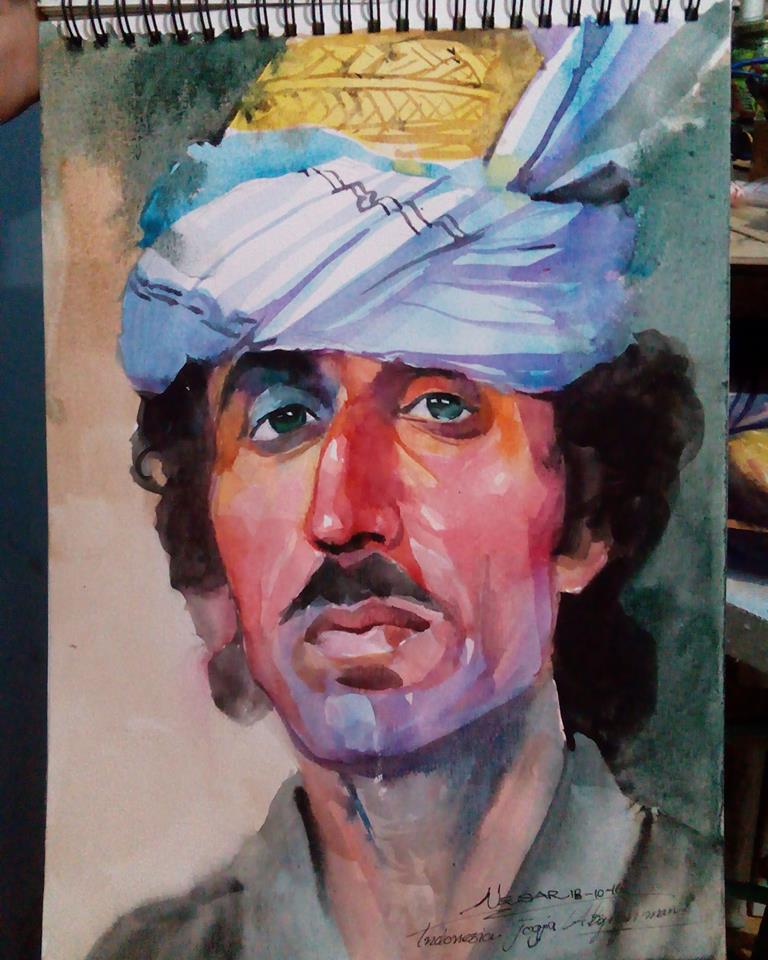 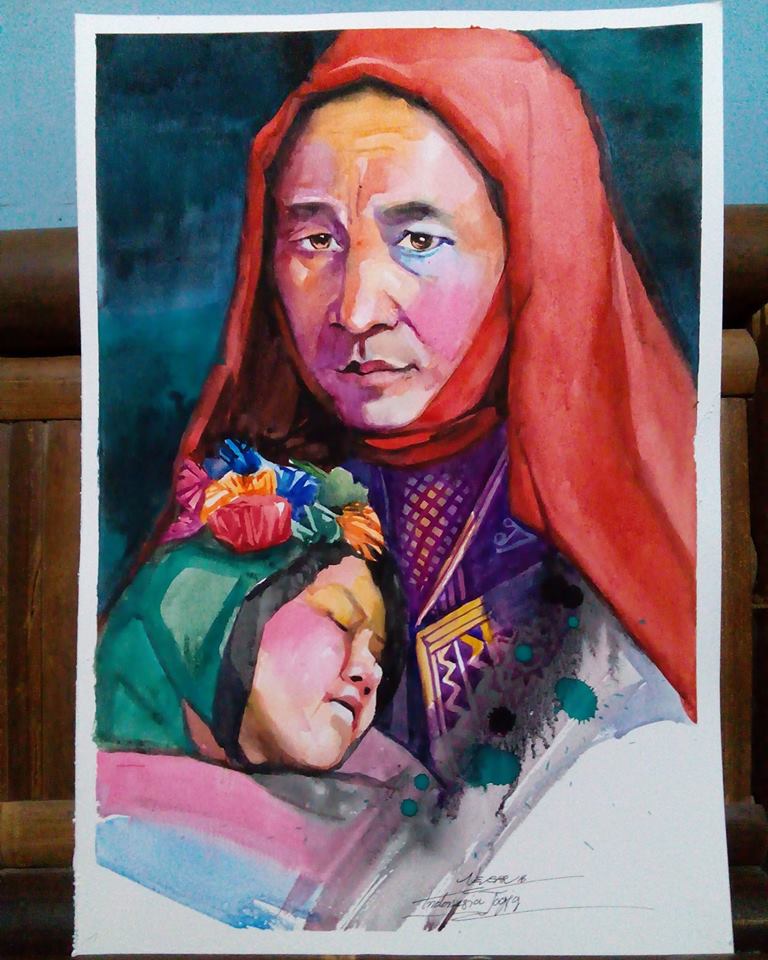 Merisi: After these two years in Kabul, did you return home to Ghazni?

N.A.Eesar: Yes in 2000, I returned home to Ghazni where I met my uncle who was a doctor. He had his practice in Quetta, Pakistan. He insisted that I become a doctor so he took me to Pakistan where I began working in his medical practice for two years. During this time, I did not attend school in Pakistan. In 2002, my brother Said Ahmad came to Pakistan and brought me back home to Ghazni. From there I began studying calligraphy and painting in Kabul. In 2007, I opened a small studio and began teaching calligraphy for about five years from 2007 – 2012. Besides teaching, I managed to go to art school and each year I took first position in class. Although there was a war going on in Afghanistan for four decades, people seemed almost immune to this factor and went about their daily lives as best they could. During that time, I was painting the daily activities of Afghan people up until 2012. 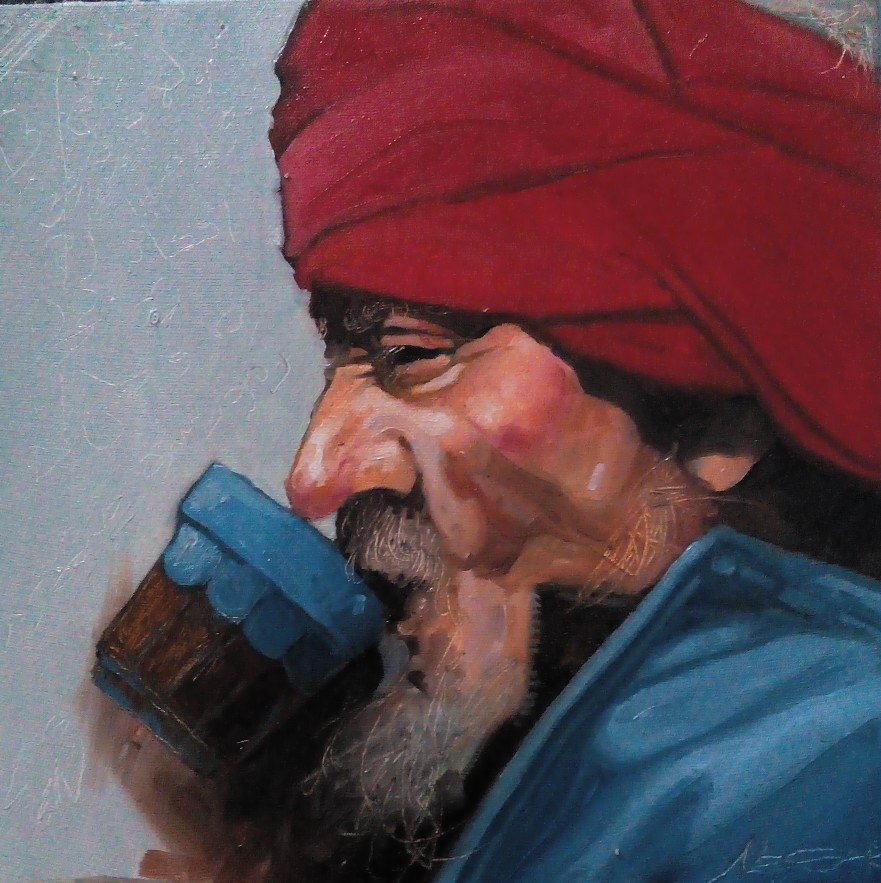 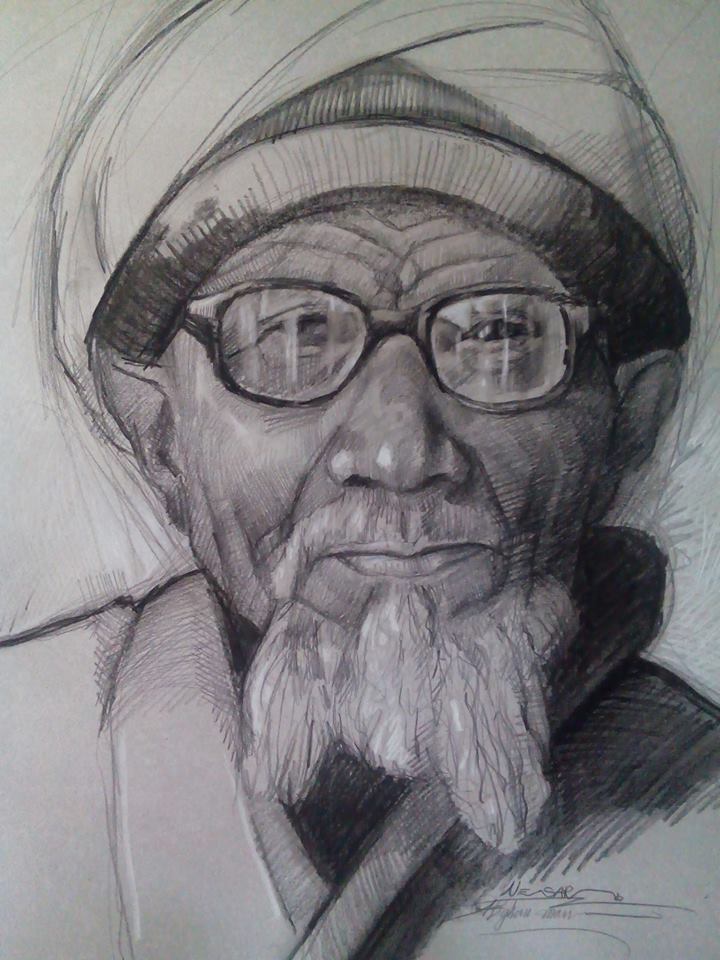 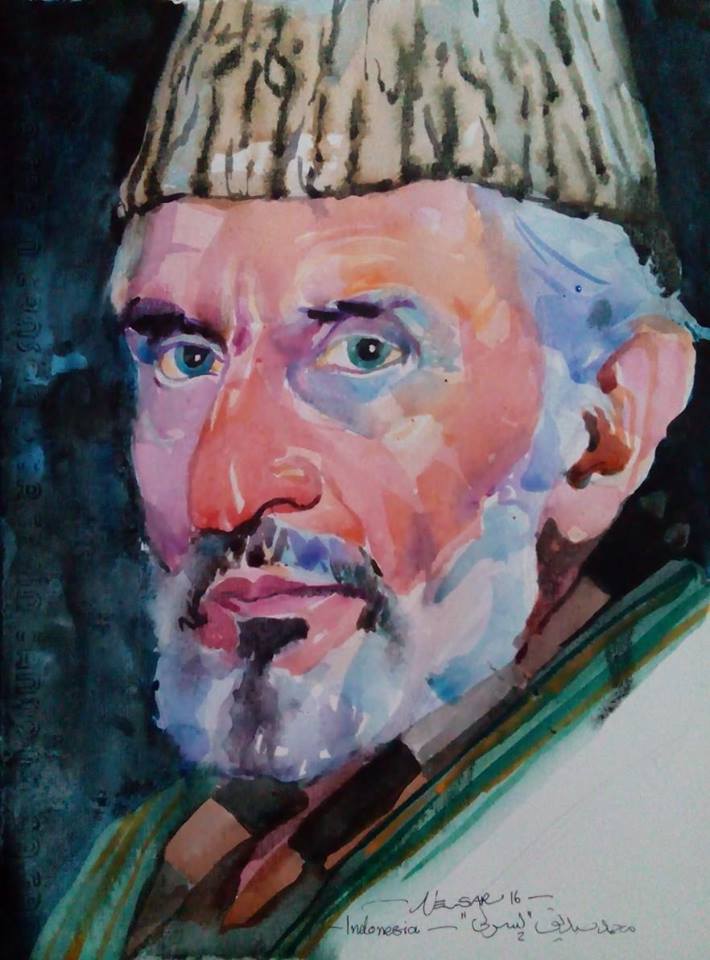 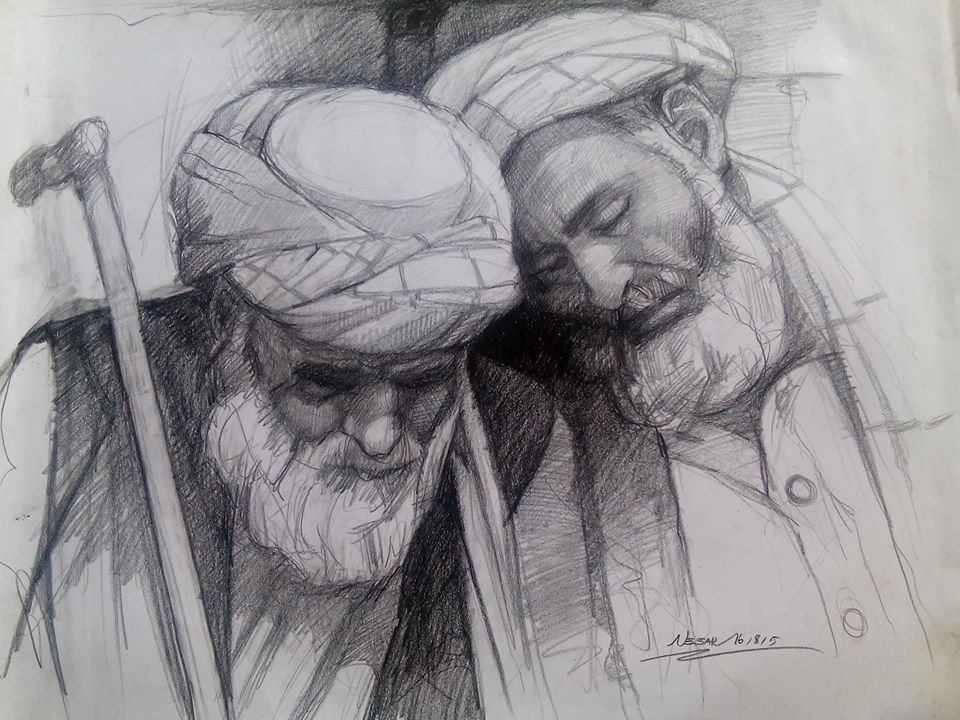 Merisi: Can you elaborate to what extent your work is informed and inspired by social, political or cultural aspects of life in Afghanistan at that time?

N.A.Eesar: While living in Afghanistan, most of my work was inspired by Afghan people, especially Pashtun culture and the daily lives of Afghan people. It was really when I moved to Indonesia, having witnessed the peaceful life here, where tribes and people of all religious denominations live peacefully together that the daunting realisation of the war in Afghanistan dawned on me and the unsafe, harsh environment that Afghan people are subjected to on a daily basis. Yet it is Afghanistan that continues to inspire my work. Through my work I have been able to portray memories of Afghanistan while studying here in Indonesia.

Merisi: So how did you end up in Indonesia?

N.A.Eesar: In 2012, I won a one year scholarship to study painting in Indonesia. I then applied to do a BA Degree here. I then won a scholarship through the Beasiswa Unggulan (BU) programme. I am now in my 7th semester in the Indonesian Institute of the Arts, Yogyakarta.

Merisi: Tell me about your current situation and your future plans.

N.A.Eesar: So far, I have been part of 26 group exhibitions and I also had 3 solo exhibitions. My first solo exhibition was titled: ‘Pieces of Peace,’ where I exhibited 53 of my works. This exhibition was dedicated to my portrayal of Afghan Pashtun Icons, Leaders and Poets. I also included portraits of my Indonesian friends who have helped me with their language and understanding their culture. I have won a few art competitions. Generally, I turn out between four to six paintings and drawings per week. Every Sunday, my friends and I paint (on the spot), outdoors.

Merisi: Do you plan on returning to Afghanistan?

N.A. Eesar: In 2017, I will have a solo exhibition in the Afghan Embassy in Jakarta City, Indonesia. I will graduate in 2017. I intend on returning to Kabul, Afghanistan after graduating, where I hope to establish an art gallery for Afghan Artists to take part in exhibitions. I hope my endeavour will attract as many Afghan artists as possible to hold art exhibitions. It is also my intention to open an art school in Kabul.

Merisi: Thank you so much for taking time to share with us your journey so far as an Afghan artist. We wish you the best of luck in the future. Daira manana. 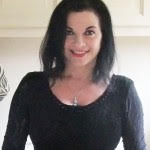 Angelina Merisi can be contacted at: merisi2325@gmail.com