PARIS: French President Francois Hollande made an unannounced visit to the main mosque in Paris on Sunday, a year after terrorist attacks in the French capital.

“The president had a short conversation and a moment of friendship and fraternity over a cup of tea,” a French presidency official said.

Earlier, Hollande attended a low-key event to mark a year since 1.5 million people thronged Paris in a show of unity following the shootings at Charlie Hebdo newspaper and a Jewish supermarket.

Mosques across France opened their doors to the public this weekend in a bid by the Muslim community to build bridges following a series of attacks that rocked France in 2015.

France honoured the victims of attacks in a thinly attended silent ceremony.

President Hollande and Paris Mayor Anne Hidalgo layed a wreath by the statue of Marianne, symbol of the French republic, in central Paris.

The statue has become a shrine to the 17 victims of the January 2015 attacks on Charlie Hebdo and a Jewish deli, and to the 130 people shot dead by militants on Nov. 13 at a concert, and in bars and restaurants in Paris.

“To the victims of the terrorist attacks in January and November … In this place, the people of France pay their respect,” read a metal plaque unveiled by Hollande and Hidalgo under a newly planted memorial oak tree on Place de la Republique in eastern Paris. 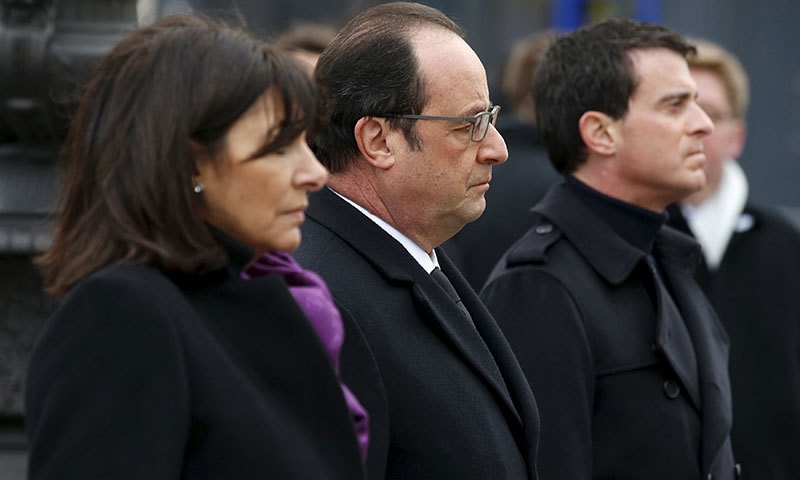 Neither Hollande or Hidalgo spoke at the ceremony, but veteran French rock star Johnny Hallyday, accompanied only by a guitar, sang a song about the march on Jan. 11 last year, which brought out the biggest crowds in Paris since the liberation of Paris from Nazi Germany in 1944.

The huge square in eastern Paris, the focal point of the January 2015 march attended by dozens of world leaders walking arm in arm, was relatively empty during the ceremony.

Hidalgo invited Parisians to come to the square with candles from 1700 Paris time and said the Marianne statue – covered with flowers, candles and pictures of the victims – will be permanently lit from now on. “Paris is scarred, but we are still standing,” she told French television after the ceremony.

Hollande, who stood stony-faced through the ceremony, later met with the families of the victims on the square.

Interior Minister Bernard Cazeneuve said security forces remain on high alert as there is a real threat of more attacks.

“We are facing an extremely high level of threat, higher than it has ever been,” Cazeneuve said on iTELE television -Agencies