PESHAWAR: A powerful bomb, detonated by a timing mechanism, ripped through a bus carrying government employees in Peshawar on Wednesday, killing at least 15 people and causing injuries to 25.

The blast that took place near Peshawar’s Sunehri Masjid targeted a Civil Secretariat bus which was carrying government employees from Mardan to the provincial capital.

Fear and panic spread among residents in the wake of the explosion and the area was cordoned off with the injured being shifted to the Lady Reading Hospital, where an emergency has been declared.

Superintendent of Police (SP) Cantonment Muhammad Kashif said the bomb was planted in the rear portion of the bus.

“Fifteen people were killed and 25 others were severely injured,” added the police officer.

Capital City Police Officer (CCPO) Peshawar Mubarak Zeb said the bus left for Peshawar from Malakand, picking up government employees on its route. The bus, which is parked at a petrol pump during the night, leaves for duty after morning prayers. Levis personnel provide security in the area, the CCPO said.

Malakand is closely linked to Bajaur Agency and Mohmand Agency, which are sensitive areas, he said.

He said the employees were travelling in a privately-operated bus and that the government cannot ensure security of private vehicles. It was the responsibility of the contractor, Ghani said, adding that usually checks are carried out before the bus leaves its station.

This is not the first time that a civil secretariat bus has been targeted in Peshawar. Similar attacks in 2012 and 2013 killed at least 38 people.

Peshawar has seen scores of attacks on civilians as well as law enforcement personnel in the past. The city is also the home to the XI Corps, an administrative corp of the Pakistan Army which manages all military activity in KP and is currently engaged in a full-blown operation in North Waziristan.

Expressing his grief over loss of lives in the attack, Prime Minister Nawaz Sharif strongly condemned the blast.

The explosion comes a day after the military top brass suggested publicly that the army was about to conclude the military offensive in North Waziristan’s Shawal valley.

Despite implementation of the 20-point National Action Plan (NAP) combating terrorism, there have been multiple attacks in the country since the beginning of the year. 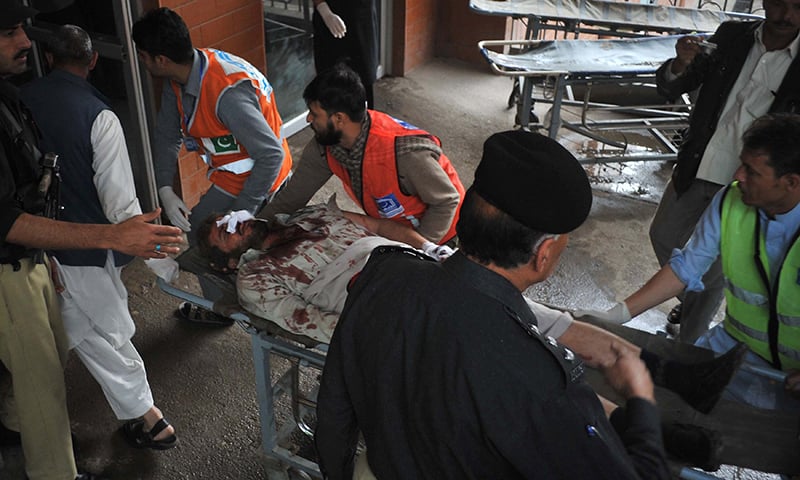 In January, the insurgency-ravaged province of KP witnessed another APS-style attack on Charsadda’s Bacha Khan University, engineered by the mastermind of the horrific Dec 2014 massacre.

Since then, there have been numerous attacks targeting security forces’ convoys and checkposts.

The most recent attack comes just days after a blast hit Charsadda’s Shabqadar area, an attack claimed by Tehreek-i-Taliban Pakistan (TTP) splinter group Jamatul Ahrar. The group claimed the attack had been carried out to avenge the hanging of Mumtaz Qadri, the killer of Punjab Governor Salman Taseer.

On the other hand, official reports claim there have been thousands of intelligence-based operations, and scores of militants have been arrested and eliminated as per the implementation of NAP. -DN