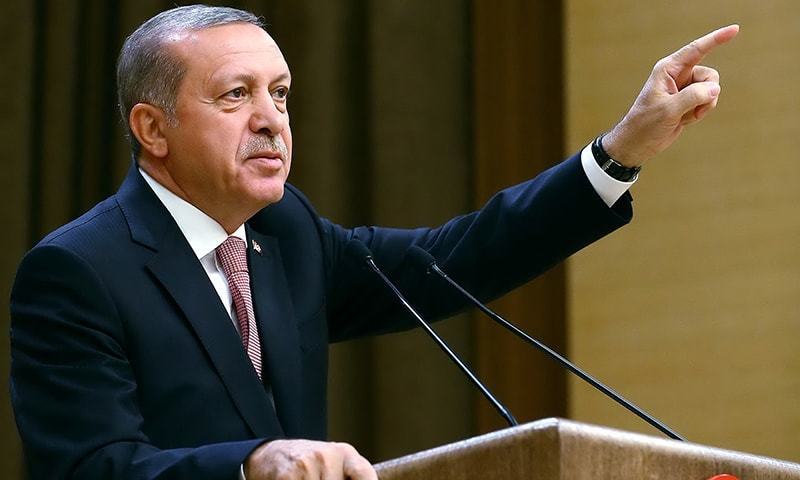 ISTANBUL: Turkey’s President Recep Tayyip Erdogan on Tuesday accused the West of supporting “terror” and the coup plotters who tried to unseat him, in his toughest attack on Ankara’s Western allies since the July 15 attempted putsch.

“Unfortunately, the West is supporting terror and standing by the coup plotters,” said Erdogan in a televised speech at his presidential palace.

“Those who we imagined to be friends are standing by the coup plotters and by the terrorists.”

Erdogan angrily denounced the judicial authorities in Germany for not allowing him to address via video conference a rally in Cologne at the weekend in his support.

He accused Germany in the past of allowing leaders from the outlawed Kurdistan Workers Party (PKK) of addressing events in Germany via video conference.

He said Turkey had previously also handed Germany a list of over 4,000 wanted militants without having any response.

“Is the West on the side of democracy or on the side of terror?” he added, also accusing Belgium of failing to hand over a leftist militant linked to the 1996 killing of Turkish businessman Ozdemir Sabanci.

Coup was ‘scenario written from outside’ Turkey

Erdogan said the attempted coup was a scenario drawn up from outside Turkey, in an allusion to possible foreign involvement in the plot.

“This coup was not just an event planned from the inside. The actors inside acted out a scenario for a coup written from the outside,” Erdogan said in a speech at his presidential palace.

The president had previously said that foreign states could have been involved, while not giving clues as to which countries might be responsible.

Ankara accuses the US-based preacher Fethullah Gulen of being behind the plot and has stepped up pressure on the US authorities to extradite him back to Turkey.

“How can it be, when we are strategic partners and I ask you on behalf of my country to hand someone over on the basis of a national security strategy document, you keep on hiding and sheltering him?” Erdogan angrily asked Washington.

Erdogan said Gulen’s major source of income was in the United States, adding that $200-300 million alone comes from charter schools run by foundations linked to him. -AFP