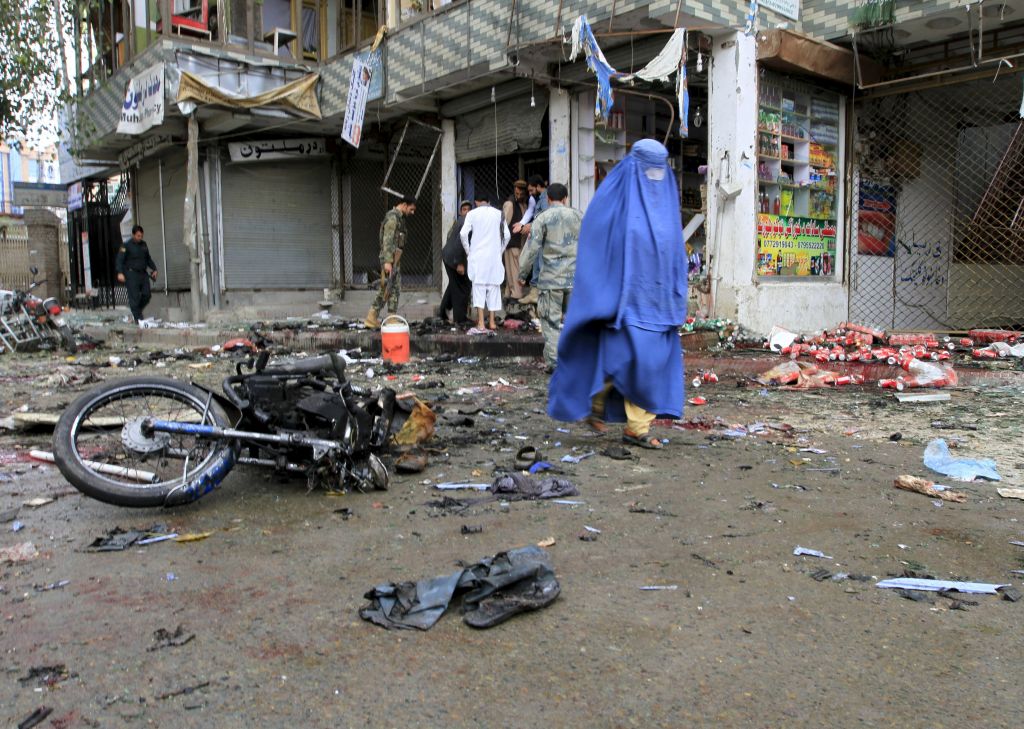 An Afghan woman walks through the cite of a suicide attack in Jalalabad, the capital city of eastern Afghan province, Nangarhar. Photo: Reuters

EDITORIAL: A foreign troops convoy was targeted in a car bombing in Dand district in Kandahar province on Monday afternoon, officials confirmed.  Eight Police soldiers were killed in Farah Taliban attack. Officials said the attack happened on Sunday night when Taliban insurgents stormed a police check post. One wounded in Pakistan missile attack on Kunar, an eastern Afghan province. Kunduz IDPs continue to suffer in the face of ongoing conflict. This is what Afghan media reported in the past 24 hours. The ongoing war is showing no signs of ending. If international forces are pulled out leaving no soldier behind in this war-wracked country, this is a challenging job for Afghan security forces to fight terrorism without coalition forces’ support. And if the coalition forces remain in this country, the Taliban are in no mood to carry out meaningful talks with the Afghan government. Though neither side looks to be winning. The Taliban will only be able to unleash terror, but no major gains. But who is losing? Definitely the Afghan masses. Everyday they lose their blue eyed ones. No one is safe. Though the Pashtun parts are too volatile in Afghanistan as compared to those parts where Tajik, Uzbeks and Hazara live. There are too reasons. The Pashtun parts touches Durand Line where this is easy for the terrorists to carry out attacks and run back to their safe havens in the tribal belt. Or the second reason looks to be is that since Pashtuns migrated to Pakistan in millions where they registered their children in thousands in thousands of religious seminaries in Pakistan. Since they have been brought up with a jihadist ideology therefore after returning these elements have been causing terror and chaos in Afghanistan. The former Afghan President Hamid Karzai, repeatedly called the Taliban his brothers so that he can allay them, but to no avail as these ideologically indoctrinated elements cannot be wooed with political appeals. They need a tough combat mission. They need isolation. And they need defeat on ideological lines. Though this problem has local, regional and international factors too, but at least the government can increase its efforts to defeat this ideology domestically. In current day world, citizenship requires that people be knowledgeable about public issues. A citizen must possess the capacity to work toward solution by acting together with the government, and other individuals, in crisis times like these, yet the man in the street is either misled, misinformed, or is this much poor that he always is preoccupied with the thoughts of hunger and work. Other nations in the world too were hit by wars and political chaos and instability, yet they not only subdued the forces of evil, but made a tremendous and a proud history. This was made possible because the masses stood by their governments. In Afghanistan, when people came together voluntarily with a shared sense of purpose for a common good, the government left them prone to the Taliban who ruthlessly killed the elders in Ghazni, Kandahar, Kunar and Paktia where they had started anti-Taliban movements, yet the government failed to support their cause. The government officials try to address the issue just by rhetoric and statements while living in guarded castles-like houses and roaming in bulletproof vehicles. The public is prone to the Taliban’s chaos. So, there are pretty enough reasons to be killed. This happens because violence is too plaguing. And there is an extreme lack of the remedy to cure this evil.