WASHINGTON: Republican Donald Trump and Democrat Hillary Clinton moved closer to winning their parties’ nominations with a series of victories in the Super Tuesday elections, the biggest day of the primary campaign.

Clinton and Trump each won seven of 11 state races as they distanced themselves from party rivals and looked ahead to a November presidential election showdown.

Clinton’s opponent, Bernie Sanders, won the Oklahoma primary and caucuses in Minnesota and Colorado, as well as the primary in his home state of Vermont, but he failed to broaden his appeal with minority voters who are crucial to the party in presidential elections. 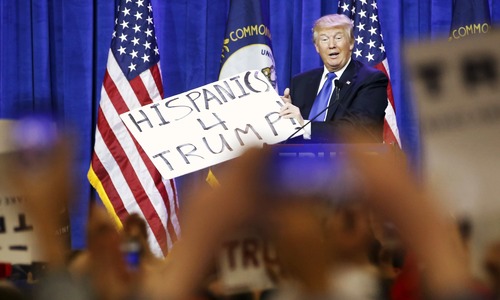 In the Republican race, Ted Cruz, a firebrand conservative senator, won his home state of Texas and Oklahoma and Marco Rubio, a favorite of the Republican establishment, won in Minnesota for his first victory. Both are seeking to break out as Trump’s main rival.

Cruz desperately needed the Texas win in order to stay in the race.

Still, Trump’s wins in the South were a blow to Cruz, who once saw the region as his opportunity to put himself on a path to the nomination.

Rubio’s win in Minnesota gave him a boost on an otherwise disappointing night. His long-shot hopes now rest with his home state, Florida, which votes on March 15, but polls show him trailing Trump there.

Trump won in Virginia, Arkansas, Alabama, Massachusetts, Tennessee, Vermont and Georgia. The race in Alaska has not been called.

Trump has stunned the Republican political establishment by emerging as the clear front-runner, winning three of the four contests preceding Super Tuesday.

He has seized on the anxieties of voters angry at Washington and worried about terrorism, immigration and an uncertain economy. Using simple terms, and often coarse language, he has soared to the top of polls with his pledge to “make America great again”.

Clinton, once seen as the all-but-inevitable Democratic nominee, has contended with an unexpectedly strong challenge from Sanders, a senator and self-described democratic socialist. But Clinton, like Trump, had also won three of the first four races.

Clinton, the former secretary of state and senator, won in Massachusetts, Texas, Arkansas, Alabama, Tennessee, Georgia and Virginia. The wins reflected her strength in the South, where black voters are an important part of the Democratic base and overwhelmingly support her.

Signaling her confidence, Clinton set her sights on Trump as she addressed supporters during a victory rally in Miami.

“It’s clear tonight that the stakes in this election have never been higher and the rhetoric we’re hearing on the other side has never been lower,” said Clinton, who is seeking to become America’s first female president.

Trump, too, had his eye on a general election match-up with Clinton, casting her as part of a political establishment that has failed Americans.

“She’s been there for so long,” Trump told a news conference at his swanky Mar-a-Lago resort in Florida.

“If she hasn’t straightened it out by now, she’s not going to straighten it out in the next four years.”

Candidates are trying to win delegates who will vote for them at the parties’ national conventions in July.

For Republicans, 595 delegates were at stake, nearly half of the 1,237 needed for the nomination.

Democrats were allocating 865 delegates, more than one-third of the 2,383 needed to become the nominee.

Clinton has now won at least 421 of the 865 delegates at stake, and Sanders at least 232. Including superdelegates – party leaders who get to vote for candidates of their choice at the convention – Clinton now has at least 969 delegates. Sanders has at least 319. It takes 2,382 delegates to win. 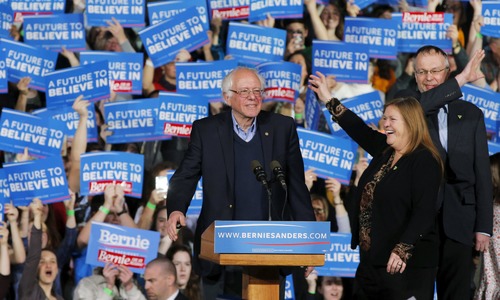 US Democratic presidential candidate and US Senator Bernie Sanders is joined by his wife Jane and son Levi at his Super Tuesday rally in Burlington, Vermont March 1, 2016.—Reuters

Trump has won at least 175 of the delegates at stake in Tuesday’s contests.

Both Cruz and Rubio have launched furious verbal attacks on Trump in recent days, but some in the party establishment fear the anti-Trump campaign has come too late.

Republicans spent months largely letting Trump go unchallenged, wrongly assuming that his populist appeal with voters would fizzle. Instead, he’s appeared to only grow stronger, winning states and drawing support for some of his most controversial proposals.

In six of the states voting Tuesday, large majorities of Republican voters said they supported a proposal to temporarily ban all non-citizen Muslims from entering the United States, an idea championed by Trump.

The exit polls were conducted by Edison Research for The Associated Press and television networks.

The worries appeared to grow after Trump briefly refused to disavow the apparent support of a former Ku Klux Klan leader, David Duke, during a television interview. Trump later said he had not understood the TV interviewer and he did repudiate Duke.

In addition to her state victories, Clinton won in American Samoa, picking up four of six delegates in the South Pacific island chain. -AP