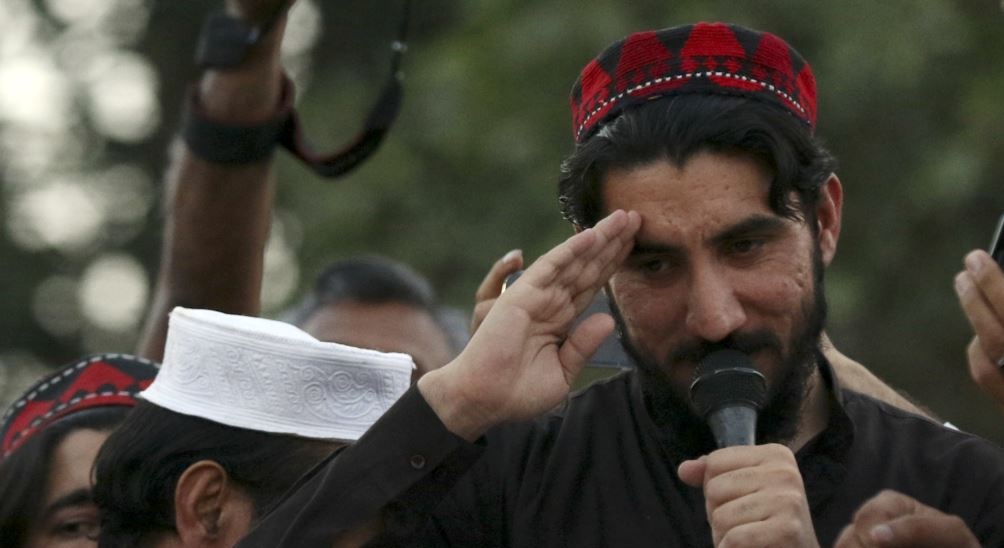 There are numerous theories about leadership, The theory of charismatic leadership can be more appropriately applied to the rising Manzoor Pashteen. Being a Muslim I don’t believe in the belief of seven reborn as believed in Hinduism. But it’s a fact that sometimes I am compelled to mull that this belief may be true. What compelled me to think over this perspective is the solid, cool and deep temper of Manzoor Ahmed Pashteen. Observing his tolerance, his insistence on humanity, his determination and most importantly his fearlessness reminds me of Baacha Khan. I think it’s not a matter to tell people who the Bacha Khan was. Every neutral and patriotic person knows the history of his struggle of non-violence against the tyrant colonial forces. The thirty-three years long imprisonment could not breach his determination and he never stepped back of his mission of non-violent Pakhtoons and free India. We must suppose Manzoor as one of the soldiers from that carvaan of non-violence.

The saga of Manzoor is not as simple and short as we think. His story contains the complexities, the traumas and the deprivations which started with war on terror back in 2001 in the tribal areas. The stories that the local narrate, compel me to think either these operations were initiated against the terrorists or to terrorize the locals. Imagine the mental settings of an individual who has raised in war zone since his childhood. What would have in his mind watching his town being bulldozed and what he would have felt looking his innocent people being killed branded as terrorists. People must be thinking, what sort of terrorists were these that even the toddlers were found in their bombarded houses, if they get authentic news.

Manzoor was one of those lucky or you may say unlucky children who survived these dire conditions. They were displaced and circumstances compelled to move to a city. Even there they could not get rid of the infuriating elements. These circumstances compelled this lad to search, what the real matter is. What type of terrorists they are that they can’t be neutralized with the heavy operations of Pakistan Army. Then he started the struggle to solve the enigma and raise voice against the two-sided sufferings of the tribal people.

This process was not so easy he had been through. He had been declared crazy by the scared people of the locality. He was stopped from speaking for the legitimate rights by his parents for the fear of being disappeared or get killed by the unknowns. He had been resisted many times by his peers not to share with them. He had been threatened and missed two times by the unknowns. Despite all these odds this man stood by his mission, the constitutional rights of his people. This man has tried every legal channel since 2014 but no one listen to his cries like most of the cases in this country. At last he organized a long march toward the federal capital, where the murder of Naqeeb Mehsud in a fake police encounter played the role of a spark. This March started from D.I. Khan with merely eighteen people as mentioned by Manzoor Pashteen. Gradually it turned into a protest of thousands of people as it reached the capital.

This was the real test of Mr. Pashteen’s metal, how and for how long could he manage to stay there and he went successfully through that. March successfully negotiated the major five demands with the Prime Minister. Then he started the campaign to go to every city and town to further mobilize the people. Where ever he go he is welcomed by thousands of supporters. I listened him twice in Lahore and I was glad and surprised that how clear was he about the moto and aspects of his moment, which is evident from his answers at the talk shows to the sharp and cunning questions of the anchors.

There are somethings which make this youth special and unique. He has no affiliation with any political party and has no feudal or bureaucratic family background. Manzoor is very humble and selfless like a saint. He is a strong believer of non-violence like Bacha Khan and a staunch humanist like Muhatma Bhuda. He lacks the element of revenge like Nilsson Mendala and very fearless at the same time as Bhuggat Sing. He is constitutionalist like Jinnah and patriot like Lincoln. And lastly, his red cap match him with the revolutionary Chigoveura. His struggles are continued, nothing can be said about the results or future of his moment but let’s wish him best of luck and stand by him.