At the Huner-i-Hawa festival in Peshawar, it was women’s day out

A fashion show, handicrafts stalls by women entrepreneurs and a Jal concert were just some of the festival highlights 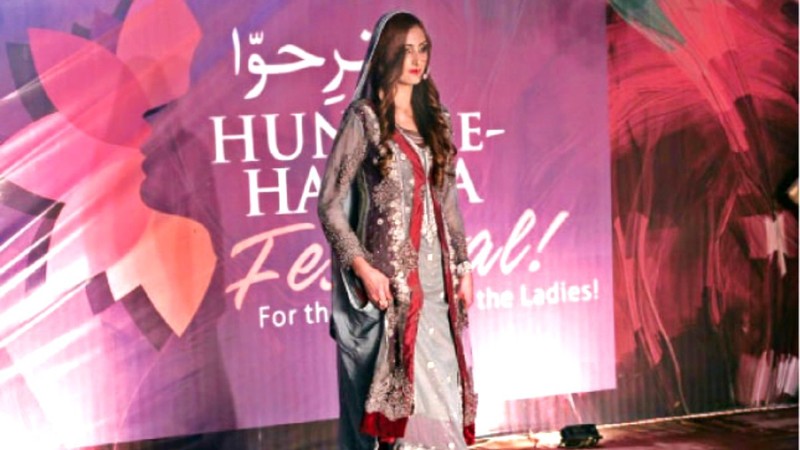 Despite rain, the event was held successfully with all its glamour including fashion shows, songs and concerts

PESHAWAR: Women of Peshawar are aware of their cultural constraints but they also know how to have fun and be creative, the Huner-i-Hawwa Festival has proved it.

Whether it was the giggling teenagers eaves-dropping on their friend getting her palm read by a girl-palmist at a stall or an elderly- tribal woman from Bara, Khyber Agency just sitting and watching the jovial young pass by, everyone looked relaxed at Huner-i-Hawwa Festival held in Hayatabad over the weekend.

There were no piercing-eyes of preying men, thus no need for veil. Women and girls, of all ages and background, attired in colourful fashionable eastern and western clothes thronged the three-day festival at a beautifully decorated arena.

The festival, organised by Tourism Corporation of Khyber Pakhtunkhwa, for the second time, with the help of young women of the province, exhibited products and skills of some 40 skilled businesswomen from across the province.

As is common, holding an all women exclusive activity especially a festival in a city still having scars of militancy and plagued with extremism was not less than an impossible task for the organisers. Yet they made it possible due to their sheer will and passion.

The organisers could make an excuse and easily cancel the festival, which was postponed twice earlier due to man-made and natural calamities, but TCKP media director Zara Alam and her team synergised by the head of the department Azam Khan didn’t give up on women’s cause and held it let rain or storm come.

Despite rain, the event was held successfully with all its glamour including fashion shows, songs and concerts. It ended with a bang as fireworks exploded in the sky to let everyone know that women could have fun within the constraints of the culture in a decent manner. Skies didn’t fall. No ‘obscenity’ was reported or observed, which is quiet contrary to what some religious leaders in local mosques had warned the local people of in their sermon.

“Women and girls had fun but no one made any video on cellular phone as they were aware of the culture and respected privacy of other women,” said Uzma Mehboob, a single working woman, who attended the festival for two days.

“I have come with my sisters to have fun here. It is suffocating environment here. We need more such events to vent our emotions,” said Maryam, another young woman.

Girls also exhibited their penchant for stylish clothes fully as designers exhibited their bridal wear. Some 14 amateur models, who were students of different colleges and universities, showed confidence like professionals in their cat-walk on the ramp. Professional models from Lahore and Karachi also participated in the event.

The local singers and Jal Band enthralled the young women of Peshawar in the festival and for a minute made them forget they were in a city which has seen worst times.

“These women have survived bomb blasts and they deserve to have a little fun to forget the pain,” said Maryam. -Dawn