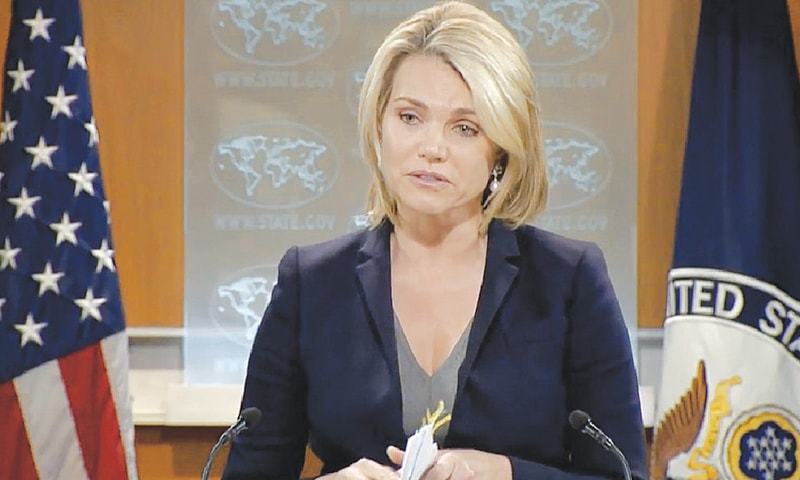 WASHINGTON: The Trump administration announced on Thursday it is suspending its entire security assistance to Pakistan until it proves its commitment to fight all terrorist groups operating in the region.

State Department spokesperson Heather Nauert told a news briefing in Washington that the cut-off is not permanent and only affects military assistance.

Official sources told Dawn that the proposed plan does not call for “a total cut-off”. Instead, it suggests a “condition and issue-based approach”.

Ms Nauert said the suspension will remain in effect until Pakistan “takes decisive action” against groups such as the Taliban that are “destabilising the region and targeting US personnel”. Although Pakistan “certainly has been helpful in some instances,” she said, “they are not taking steps they need to take to fight terrorists.”

The aid suspension will include equipment and the transfer of security-related funds, with possible exceptions for US national security reasons.

“We are still working through the numbers,” said Ms Nauert when asked to give an estimated impact of the suspension in dollars.

But the Trump officials had already suspended $255 millions of security assistance from the Foreign Military Financing (FMF) fund, which is used to provide military equipment and training to a friendly country.

The US Congress has also taken away half of the $700m set aside for reimbursing Pakistan for supporting US war efforts along the Pak-Afghan border.

The suspension will now affect the remaining $350m in this account, known as the Coalition Support Fund.

Reports of an impending action against Pakistan have been circulating in Washington since Monday, when President Donald Trump sent out a tweet at 4am, accusing Pakistan of taking billions of dollars in aid and in returning giving “nothing but lies & deceit, thinking of our leaders as fools”.

The plan to cut security assistance for Pakistan also comes as the Trump administration seeks more cooperation from Islamabad as part of its strategy in Afghanistan.

Ms Nauert said the latest measure would also suspend other security assistance, but did not specify what that covered, saying it was administered by the Defence Department.

The Trump administration also has other options, besides suspending or stopping its economic and security assistance to Pakistan. It can remove Pakistan from a list of major non-Nato allies and can also designate it a state sponsor of terrorism.

Yet another option is to work with India and Afghanistan to bring more pressure on Pakistan.

“As it plans to announce new actions on Pakistan very soon, the Trump administration should consider measures that go beyond previous attempts to change Pakistani behaviour,” said Shamila N. Chaudhary, a former director for Pakistan and Afghanistan on the White House National Security Council during the Obama administration.

“It’s time to ask a new question: how do we deal with a country that has areas of conflicting interests with our own, but one that demands our long-term attention?” she told a US radio network NPR.

Also on Thursday, US Secretary of State Rex Tillerson placed Pakistan on a special watch list for severe violations of religious freedom. A brief announcement by the State Department said that for the first time it has created a ‘Special Watch List’ for countries that “engage in or tolerate severe violations of religious freedom but may not rise to the level of CPC (Countries of Particular Concern).

Pakistan, however, is not on the list of 10 nations that violate religious freedom in a “systematic, ongoing, egregious” manner. That 10-state list includes Myanmar, China, Eritrea, Iran, North Korea, Saudi Arabia, Sudan, Tajikistan, Turkmenistan and Uzbekistan.

The US Commission on International Religious Freedom, which prepares the annual report on religious violations, has been recommending for the past several years that Pakistan be placed on the CPC list but the secretary ignored its recommendations. -DN