Posted by: The Pashtun Times in Afghanistan, Latest News August 2, 2016 0 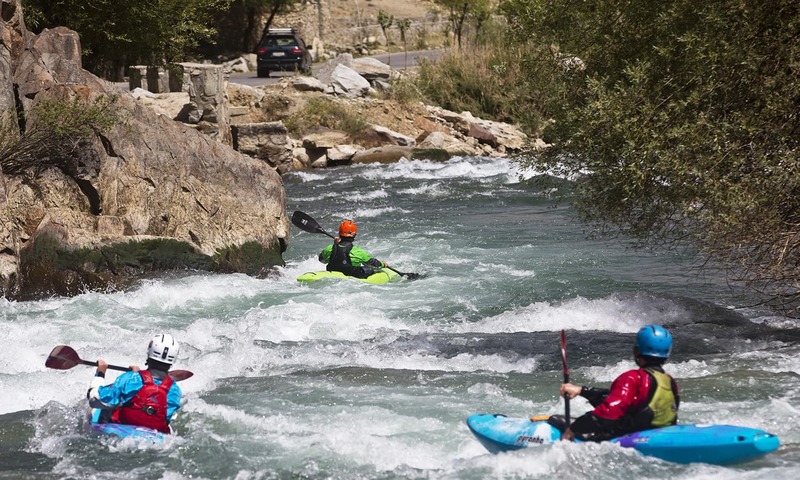 PANJSHIR: On a recent sunny morning in northern Afghanistan, excited children and bemused policemen lined the banks of a fast-flowing river to watch a group of Europeans in multicolored kayaks navigate the white water. A drone-mounted camera also followed the kayakers’ progress, buzzing and hovering above them like a mosquito.

The boys, who were on their way to school, squealed and raced along the rocks as they watched the unusual spectacle — no kayakers had ever come to the peaceful Panjshir Valley, some 140km north of the Afghan capital, Kabul.

But according to Callum Strong, a Scot who recently graduated with a geology degree from Edinburgh University, Panjshir River offers some of the best kayaking in the world.

Together with three friends, he spends all his spare time and money travelling the globe in search of the best white water. Panjshir looked promising on the map — that Afghanistan is grappling with a 15-year insurgency was not going to deter them.

“It’s extreme geography that attracts extreme sportsmen, not the fact that the place is at war,” he told The Associated Press as he dragged his kayak out of the water following an invigorating three-hour paddle down the Panjshir River. His three friends — Brit Joe Rea-Dickins, Scot James Smith and Austrian Kristof Stursa — are also recent graduates in their early 20s and amateur kayakers who met through their love of the sport.

They funded the trip to Afghanistan themselves, flying to Kabul with their kayaks and then employing a local travel agent to help them transport their kit, organise permission from security services to travel and move safely through dangerous areas.

Then they spent 10 days paddling the length of the Panjshir River and introducing the local community to the sport.

“Before I came here, I was worried as the only news you hear from Afghanistan is bad news,” Strong said.

“But I believe most places you go in the world, most people are good — and the river here looked very good, so we wanted to come.”

His friend Rea-Dickins was similarly enthusiastic, comparing Panjshir to the best places he’s kayaked in northern Europe, India and Pakistan. “In terms of white water, this is as good as anywhere in the world,” he said.

One of the joys of the sport, he said, is that “it takes you to pretty interesting places, it gives you purpose, you can be in a beautiful environment for weeks, you go off beaten tracks and stay where you end up and you meet with local people”.

Panjshir is considered one of the safest regions of Afghanistan. The roads are closed to outsiders, who must register with security forces and explain the reason for their visit to gain access.

Many people come to enjoy the peace, as well as the pristine environment and the famous produce, including yogurt, honey and lamb kebabs. Panjshir is also famous for precious stones — especially rubies and emeralds — and as a smuggling route for millions of dollars’ worth of lapis lazuli, a blue stone largely unique to Afghanistan, mostly destined for Pakistan and China.

It is also the home of the so-called Lion of Panjshir, Ahmad Shah Massoud, a military leader who earned his moniker fighting Soviet forces and the Taliban and whose legendary status was cemented when he was killed by Al Qaeda sympathisers on September 9 2001 — two days before the 9/11 attacks that sparked the US invasion and the Afghan war.

The country’s chief executive, Abdullah Abdullah, is also from Panjshir. His face beams from massive billboards alongside the portraits of Massoud and local leaders. Panjshir is a province that takes its war heroes seriously.

It could soon take kayaking seriously, too, if the efforts of the four enthusiasts find traction here. After a week of paddling, the four set up a kayaking workshop to teach interested locals.

The Panjshir football team showed up to give it a try, arriving straight from training in their bright green-and-white kit.

“They are very good learners, a lot of the guys we have seen are very fit and strong. And they are used to swimming in this river, which is very powerful,” Strong said.

Strength and comfort in the water are both good starting points for learning how to stay afloat, and have fun, in a kayak.

While it might be many years before the emergence of Afghan kayaking clubs, Strong and his group are hoping that their visit will lay the foundations for others to follow and discover the beauty and power of the Panjshir River.

“We have paddled the river so we can tell other people the river is good and that when we were here, the political situation and security was good,” he said.

“If that prevails, then kayaking can grow here, and you might see more international teams come here to do this river.”

Mohammad Zahir, a member of the Panjshir football team, was most excited by the possibility that kayaking could take him abroad.

“I would love to reach the level of our friends who are here from other countries, so I could travel to other places for kayaking,” he said. -AP