DUBAI: A year after it launched air strikes in Yemen, a Saudi-led military coalition has failed to deal a decisive blow to Iran-backed rebels and is facing mounting criticism over civilian casualties.

With warring parties drained by the fighting, the United Nations said on Wednesday that a ceasefire had been agreed from April 10, to be followed by peace talks.

Analysts say that since air strikes were launched on March 26 last year, rebel resistance has been far more effective than expected and the weakness of Yemen’s internationally recognised government has been exposed.

The Shia Huthi rebels and their allies remain in control of large parts of Yemen including the capital Sanaa.

“The Huthi and Saleh forces have done relatively well given the circumstances,” he said. “They have no air cover and no secure means of resupplying their arsenal yet they retain significant military power.”

The Huthis’ seizure of Sanaa and other parts of the country raised alarm bells in Riyadh, which feared the Shia minority from Yemen’s highlands would extend Iranian influence in its southern neighbour.

When President Abedrabbo Mansour Hadi’s government was forced to flee into Saudi exile, Riyadh and its Sunni Arab allies in the coalition vowed to restore it to power.

Backed by coalition firepower, loyalist forces have been able to assert control over much of Yemen’s once-independent south including the main city of Aden, where Hadi has established a temporary capital.

But the rebels have stubbornly held on to eight of Yemen’s 22 provinces and heavy fighting has been raging for months in five others.

Among them is the strategically important central province of Taez, where loyalists have failed to advance despite a major offensive launched in November.

“The Huthis have proven adept at holding onto territory and colonising key state organs,” said Jordan Perry, a Middle East and North Africa analyst at the Verisk Maplecroft consultancy.

“The coalition has been handicapped by a lack of technical expertise and battlefield experience,” said Perry.

The UN says civilians account for more than half of the about 6,300 people killed in the conflict in the last year.

Riyadh’s key ally Washington has expressed concerns over civilian deaths and international rights groups have urged the United States and other world powers to stop selling arms to Saudi Arabia. 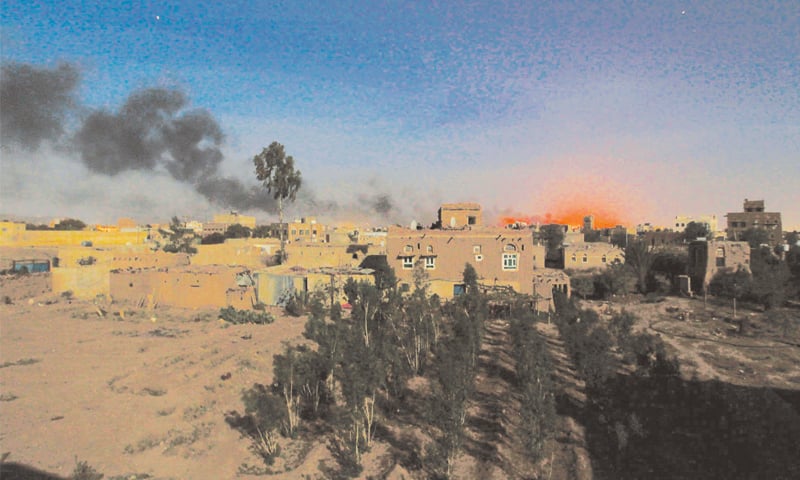 SMOKE billows from buildings following reported air strikes by the Saudi-led coalition on arms warehouses at al-Dailami airbase, controlled by Huthi rebels and their allies, on Sept 26, 2015, north of the capital Sanaa.—AFP

As international criticism of the intervention grows, Riyadh is saying its main phase may soon be over.

Coalition forces have made “a big achievement towards peace and stability in Yemen. Today we have a government, recognised by the international community, running the country from Aden,” Assiri said

But loyalist and coalition troops have been struggling to secure these areas, where radical Sunni groups have widened their influence.

The militant Islamic State group and Al Qaeda have exploited the chaos and carried out deadly attacks in the south, mostly against pro-Hadi forces.

Hadi’s government and the coalition have “prioritised their struggle against the Huthis, turning a blind eye to the gains made by radical Sunni groups that have continued to metastasise within the security vacuum”, Perry said.

Yemen’s powerful Al Qaeda affiliate has even managed to take control of much of the southern Hadramawt province and its capital Mukalla.

“The Saudis miscalculated the ability of the Hadi camp to govern liberated territory and Al Qaeda took advantage,” said Schmitz.

It was only this month that coalition warplanes targeted jihadists in Aden for the first time. The United States has meanwhile continued to hit Al Qaeda in Yemen, killing at least 40 militants in a strike this week.

New hopes for a breakthrough in the conflict surfaced on Wednesday after UN envoy Ismail Ould Cheikh Ahmed said that warring parties agreed on a ceasefire that would be observed before peace talks start on April 18.

Previous negotiations have failed and several ceasefires were never respected.

But a recent mediation effort that essentially stopped fighting along the Saudi-Yemeni border could provide “a glimmer of hope. The Huthis need to pull back their forces, let go of the Iranians, and show respect to Saudi security concerns,” Schmitz said.

Still, Perry said the rebels are unlikely to withdraw from all the cities they have seized.

“The jewel in the Huthis’ crown — the capital Sanaa — is not at imminent risk of takeover,” he said.

Perry said a comprehensive and lasting peace settlement in Yemen was a “distant prospect”, with “very limited” potential for power-sharing as “deep divisions will persist”.

But a halt in fighting is sorely needed, said Rima Kamal, the local spokeswoman of the International Committee of the Red Cross (ICRC).

“Hospitals have run out of supplies, electricity and water systems have broken down, food and other basic commodities such as fuel have run critically low” in the impoverished country, she said.

“Death and injury have become daily occurrences,” said Kamal, whose group has seen two staff members killed during the past year and another abducted.—AFP