Macron, Merkel and May: Europe is getting very complicated 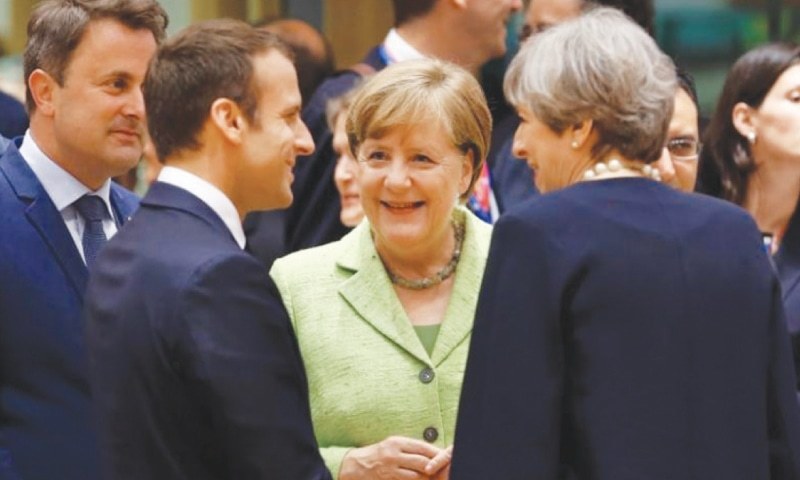 EUROPE is getting very complicated. And even more confusing than usual. But there’s no doubt that after years of political paralysis and economic stagnation, the continent is on the move again, with no dull moment.

So French President Emmanuel Macron is Europe’s new saviour, Germany’s recently re-elected Chancellor Angela Merkel is the trustworthy bearer of the European flame and Theresa May? Well, the British prime minister, in the words of her erstwhile colleague George Osborne, is a “dead woman walking”.

The trio dominate the European landscape for the moment but truth be told, poor May is being edged out of the game by her own rebellious party members and the once-again resurrected Labour leader Jeremy Corbyn.

Macron remains the European superstar. Given his tough reform agenda, the French president may not be popular at home with trade unions and other defenders of the status quo but his star continues to rise across Europe.

The French leader’s plan for an overhaul to make the EU more integrated, more democratic, and more competitive, dominated the headlines last week, overshadowing the fallout of the German elections — including the worrying success of the far right Alternative for Germany (AfD) party — and the quivering speech on Brexit made by May in Florence.

Macron in contrast spoke for more than 100 minutes at Paris Sorbonne university, delivering a stirring vision of a refashioned dynamic and vibrant Europe which had Europhiles applauding across the continent. “I don’t have red lines, only horizons,” he said.

The French leader laid out a vision of the EU in 2024 that would be based on “common democratic values” as well as a “simpler, more protective” single market. This EU would include a more integrated eurozone with its own budget managed by a finance minister who would be held responsible by a eurozone parliament.

The European Commission would be reduced to 15 members and half the members of the European Parliament would be elected through trans-national lists as soon as 2019. Macron also proposed a common defence budget, with a “common doctrine” and a “common intervention force” by 2020. He proposed a “European intelligence academy” and a European prosecutor to fight terrorism.

The French president said that the EU should have a common agency to manage asylum requests and centralise interconnected databases and biometric IDs. The EU would have, at the same time, a common policy to train and integrate migrants.

“The only way to ensure our future is to rebuild a sovereign, united and democratic Europe,” he said. And if needed, he said, the EU would evolve at different speeds.

Macron’s speech, coming only two days after Merkel was returned to power in German elections, signals the start of a new wave of European efforts to rebuild the EU after years of difficulties and economic stagnation.

It won’t be easy. Many of Macron’s ideas are seen as too much, too soon. Critics say he is out of touch with the difficult reality of transforming ideas into actions.

Merkel — still seen as Europe’s most trusted leader — will spend the next few weeks trying to build a difficult coalition with the liberals and the Greens.

Her star has been tarnished by the electoral success of the populist AfD, which opposes her decision to welcome refugees and migrants. But Macron said he was sure that Merkel will choose “audacity and the sense of history” rather than “timidity”.

Strikingly for a French president, Macron encouraged young Europeans to speak at least two languages and to live and work in another European country. “The Europe of multilingualism is a chance,” he said.

The French president’s passionate defence of Europe and array of ideas for the future is music to the ears of EU policymakers, who say the bloc is ready for a new spurt of growth.

Earlier this month, European Commission President Jean Claude Juncker also laid out his plans for Europe’s revival — although many of his ideas were immediately trashed as too ambitious by several European leaders.

But even as they squabble over just how to move forward, most EU leaders agree that the bloc’s new upbeat mood means it’s time to make some important changes in decision-making procedures and to set out more ambitious targets.

And one of the reasons for the burst of energy is Brexit. Much to the chagrin of many Brexiteers, far from drowning in tears at Britain’s imminent departure, the EU27 appear to be in celebratory mood.

Nightmare scenarios under which other EU status would seek to emulate Britain by also demanding a Euro divorce have proven to be little more than scare-mongering. If anything all talk of other “exits” has disappeared.

In fact, Brexit and the arrival of US President Donald Trump have given added energy to the EU.

In any case, May’s future looks increasingly grim. Squabbles among key members of her cabinet dominate the headlines while newspapers have begun to talk of Labour leader Corbyn as Britain’s next prime minister.

Interestingly, even as Britain’s media appears increasingly obsessed by the infighting in May’s cabinet and the details of Brexit, their counterparts on the continent hardly seem to care about the future of British democracy. Britain has very sadly written itself out of the EU’s future. And neither Macron nor Merkel seem to care. Really, they don’t. -Shada Islam, DN